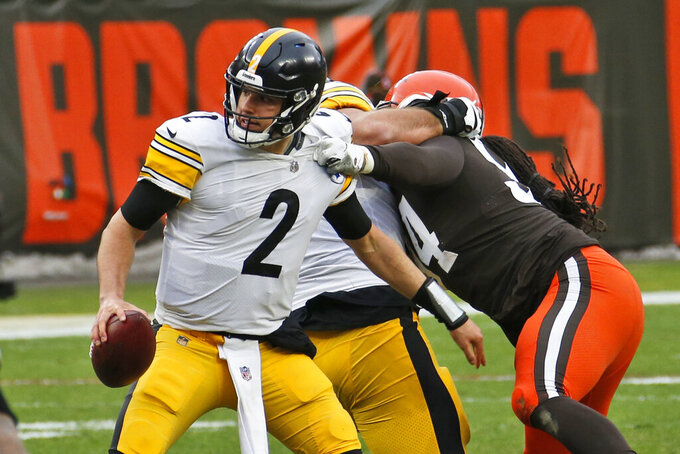 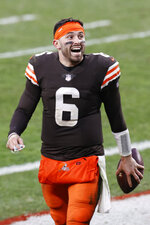 In the stands, masked fans hugged, high-fived and took one last look at the final score — Cleveland 24, Pittsburgh 22 — just to make sure.

The Browns, winless just three seasons ago and so bad for so long, are in the playoffs.

The NFL's longest postseason drought is over.

“I am really just happy for our fans,” said first-year coach Kevin Stefanski. “They deserve this. They have been waiting for this and we are happy to deliver that to them.”

Mayfield threw a touchdown pass and had several big runs in the second half as the Browns made the playoffs for first time since 2002 on Sunday, surviving a late Mason Rudolph-led rally to beat the rival Steelers, who sat quarterback Ben Roethlisberger and several other starters.

It wasn't easy. They nearly blew a 15-point lead in the fourth quarter, but stopped Pittsburgh's 2-point conversion attempt, recovered an onside kick with 1:22 left and then ran out the clock.

A week of COVID-19 disruptions concluded in celebration as the Browns wrapped up their big reward: a third matchup this season against the AFC North champion Steelers, in Pittsburgh next Sunday night.

“We're not satisfied,” Mayfield said. “We expected to be here. ... All we wanted was a chance, and now we have one.”

Nick Chubb rushed for 108 yards and a touchdown for the Browns, who were up 24-9 early in the fourth before Rudolph brought back the Steelers (12-4).

Instead of Roethlisberger, who is 23-2-1 in his career against the Browns, Steelers coach Mike Tomlin started Rudolph and left defensive stars T.J. Watt and Cam Heyward along with center Maurkice Pouncey back in Pittsburgh.

Big Ben and the boys will be back in a week.

Rudolph's 2-yard TD pass to JuJu Smith-Schuster with 1:23 left pulled the Steelers within 24-22. But the backup QB badly overthrew rookie Chase Claypool on the 2-point attempt, and Browns tight end Stephen Carlson fell on the ensuing kick under a pile of bodies.

The Browns only had to run out the clock to secure the win and Mayfield, who earlier had a key 28-yard run, scampered for 3 yards on 3rd-and-2 with 1:10 left.

Before the scoreboard clock in FirstEnergy Stadium ticked off its final seconds, most of the 12,000 fans — there were some Terrible Towel wavers — cheered wildly and Browns players danced off the sideline and onto the field.

“This is what we imagined,” said defensive star Myles Garrett, who didn't win a game during his 2017 rookie season.

The Browns and their passionate fan base endured 197 losses, 14 double-digit-loss seasons and seven coaches since the last playoff appearance.

Stefanski's team barely practiced this week because of COVID-19 positive tests and protocols and went into its most important game in years without six players, including top cornerback Denzel Ward, and three assistant coaches.

The Browns were clinging to a 10-9 lead in the third quarter when Rudolph, under extreme pressure, floated a pass across the field that was intercepted by reserve cornerback M.J. Stewart.

Cleveland capitalized with wide receive Jarvis Landry taking an inside handoff and scoring on a 3-yard run to put the Browns up 24-9. Landry, forced to sit out the first game of his career as a COVID-19 close contact last week, celebrated his score by rifling the ball against the padded end zone wall.

For the moment he got to Cleveland in 2018, Landry's goal was to get the Browns back to the postseason.

“I’m just excited to play football this time of year," he said. “I don’t care who we play.”

Garrett and Rudolph barely crossed paths — until after the game.

It was their first meeting in Cleveland since Garrett tore off Rudolph's helmet and hit him with it, one of the ugliest on-field incidents in recent NFL history that led to a suspension for Garrett.

“I told him good luck,” Rudolph said. “A lot of respect for him.”

Chubb went over 1,000 yards for the second straight season in style. His 47-yard TD run pushed the Pro Bowler into quadruple digits despite him missing four games with a sprained right knee.

Browns: DE Olivier Vernon suffered an ankle injury in the fourth quarter. Vernon didn't put any weight on his leg while being assisted to the medical tent. He was carted to the locker room. ... Rookie WR/PR Donovan Peoples-Jones suffered a concussion late in the first half while jumping to make a catch and getting drilled by safety Sean Davis.

Browns: Back to Pittsburgh, where they lost 38-7 in October and have dropped 17 in a row at Heinz Field. Cleveland's previous playoff game was also in Pittsburgh, a heartbreaking 36-33 loss in '02.

Steelers: Will be back at full strength for their first playoff appearance since the 2017 season.