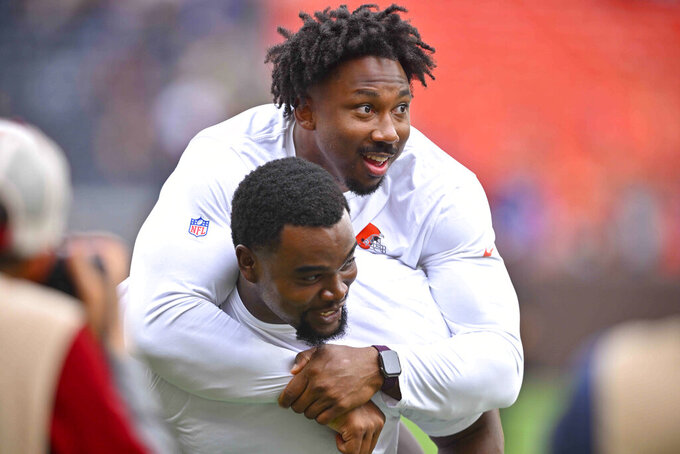 Strengths: Myles Garrett is already one of the game's best players. The All-Pro defensive lineman seeks another level. He set a single-season team record with 16 sacks last season, a mark he wants to shatter. When the Browns visited the Pro Football Hall of Fame this summer, Garrett was excused because he wants his first tour to be at his induction. Garrett leads a Browns defense that will be among the league's fastest. Second-year linebacker Jeremiah Owusu-Koramoah could be on the verge of stardom and Pro Bowl cornerback Denzel Ward leads one of the NFL's top defensive backfields.

Weaknesses: The wide receiving group is thin. Cooper, who arrived via trade after four solid seasons in Dallas, is a solid No. 1, but there's not much proven value below him. Donovan Peoples-Jones has shown glimpses of being a game-changing playmaker. Anthony Schwartz has world-class speed but has struggled with consistency and confidence. Bell could be a dependable third-down target, but he's been catching up since suffering a foot injury early in training camp.

Camp Development: York has been as advertised, and then some. The fourth-round pick from LSU has instilled confidence in teammates and coaches with his powerful right leg and ultra-confident personality. York will be counted on to be clutch in big spots and keep Cleveland's kicking game on par with the rest of the AFC North, which is loaded with quality kickers.

Fantasy Player To Watch: TE David Njoku could be primed for a huge season. With Brissett set to start while Watson serves his 11-game NFL suspension, Njoku could develop into an underneath target. The Browns didn't give Njoku a four-year, $57 million contract extension to watch him block.

Expectations: Hard to predict. Watson isn't eligible until Week 13 after agreeing to a settlement with the league for alleged sexual misconduct. It's not what the Browns had in mind when they signed the three-time Pro Bowler to an historic contract in March. With a soft early schedule, Brissett, who has made 37 career starts, might be able to keep the Browns treading water until Watson's available. Injuries are the great unknown and starting center Nick Harris and Pro Bowl returner Jakeem Grant Sr. are already out for the season.