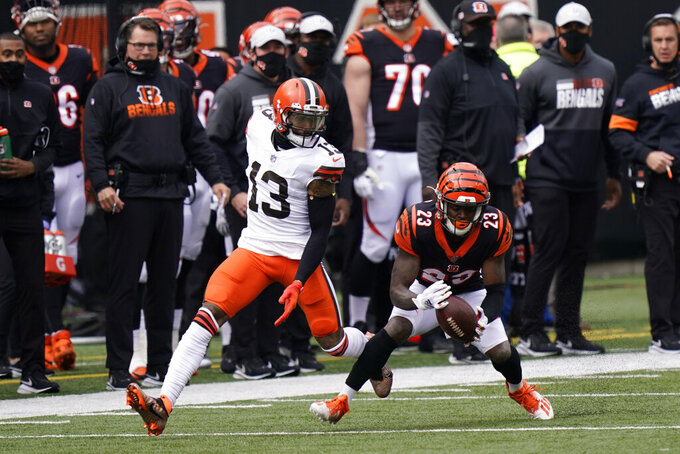 Beckham tore his left anterior cruciate ligament on Cleveland's first possession Sunday. The three-time Pro Bowler was trying to make a tackle when his left leg buckled as he began to launch himself toward Bengals cornerback Darius Phillips, who intercepted Baker Mayfield's first pass.

Beckham will likely need up to a year to recover from the injury. He's set to earn $15.75 million next season, with $12.97 million guaranteed.

The injury is another tough blow for Beckham, whose production has been limited in recent seasons because he can't stay healthy. Beckham played in all 16 games last season, his first with Cleveland, but was hampered by a core muscle injury that required surgery in January.

Beckham, who turns 28 next week, was limited to 16 games combined in the 2017 and 2018 seasons with the New York Giants because of injuries.

It's premature to speculate on Beckham's future with the Browns, who acquired him before last season in a major trade.

When Beckham arrived in Cleveland, expectations surrounding the Browns soared. However, he struggled to find on-field chemistry with quarterback Baker Mayfield and there were grumblings that Beckham wanted to be traded as the Browns went 6-10.

Beckham rebuffed those rumors and said he was happy in Cleveland, where he's been reunited with former LSU teammate and close friend Jarvis Landry.

Before getting hurt, Beckham was showing some of the breakaway speed that made him one of the NFL's most dangerous game-breaking threats. For the season, he had 23 catches for 319 yards and three touchdowns and added a rushing TD in a win at Dallas.

Now that Beckham's season is over, the Browns are expected to give more playing time to Rashard Higgins and rookie Donovan Peoples-Jones, who caught the game-winning TD to beat the Bengals with 11 seconds remaining.

By Joe Reedy 39 minutes ago
By Dave Campbell 3 hrs ago
By Dennis Waszak Jr. 4 hrs ago
5 hrs ago
6 hrs ago