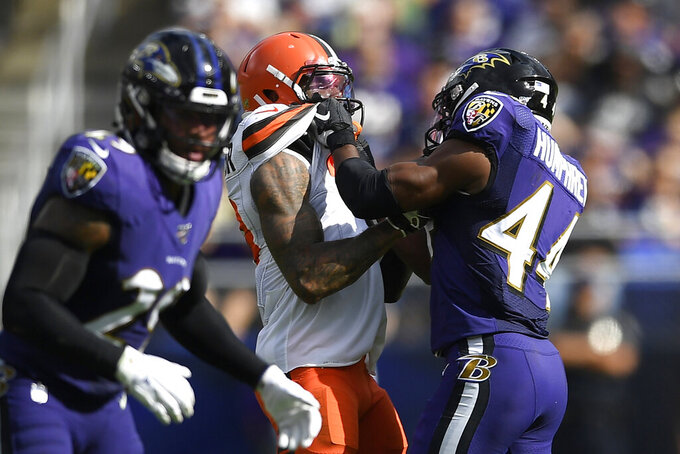 FILE - In this Sunday, Sept. 29, 2019, file photo, Cleveland Browns wide receiver Odell Beckham, center, and Baltimore Ravens cornerback Marlon Humphrey (44) grab each other during the second half of an NFL football game in Baltimore. Browns coach Freddie Kitchens wants more consistent NFL officiating after wide receiver Odell Beckham Jr. was choked during Sunday’s game. Beckham got into a skirmish with Ravens cornerback Marlon Humphrey, who pinned the three-time Pro Bowler and had his hands around his neck before being pulled away. Both players were assessed personal fouls, but neither was ejected. Kitchens said he planned to reach out to the league about that situation in particular and officiating evenness in general. (AP Photo/Nick Wass, File)

"Did you see the video?" he asked.

Defending actions they feel were warranted, the Ravens posted a video and story on their website Tuesday to dispute that Humphrey choked Beckham when the two tangled during the third quarter of Sunday's game.

The slow-motion video shows the fight between Humphrey and Beckham, who after some pushing and shoving winds up pinned below Baltimore's defender. While the clip shows Humphrey's hands pushing Beckham's jersey up around his neck, the story insists the Ravens defensive back did nothing wrong.

Kitchens was upset that Humphrey was not ejected and reached out to the NFL for clarification about the incident in Cleveland's 40-25 win. Kitchens did not divulge any specifics about his conversation with the league.

"We talked, and I got an understanding moving forward," Kitchens said when asked if he was satisfied with the league's response.

"You look at the video, I looked at it this morning," Hubbard said. "The dude is really like trying to strangle my brother. Something has to be done about that, no matter what it is. You can't have that in this league."

Hubbard and Browns guard Joel Bitonio found if laughable that the Ravens would go to such lengths to defend Humphrey.

"That's kind of messed up that they did say that," Hubbard said. "It's evident. It's on film. And they need to take consequences on his actions."

Spokesman Brian McCarthy said the league had no further comment beyond what referee Shawn Hochuli said in a pool report following Sunday's game. Hochuli said it was the opinion of his crew that Humphrey's actions didn't rise to the level of "a disqualifying foul."

Both Humphrey and Beckham are expected to be fined later this week for their actions.

"Very surprised, because it's shown evident on the tape that he's choking this man out," he said. "It's something that should be talked about."

Beckham, who was held to two catches for 20 yards, declined to be interviewed during the few minutes he was in the Browns locker room while it was open to reporters.

"I don't know if you want to say he was in the act of choking or not, but his hands were on his throat, he was on top of him," Bitonio said. "I think there's clear evidence of that — video evidence. Do I know if he was trying to two-hand strangle him or not? No. I haven't even really talked to Odell about exactly what happened, what he thought happened.

"But you know they're trying to cover it up. They're trying to make their player look as good as possible. But I mean the guy was on top of him on the ground with his hands around his neck. Something was happening. Even if you weren't choking him, that's not a football act right there. So something was going on that was inappropriate."

"Based on the close-up that we have of the footage that we had, (Humphrey) pinned him on the ground after about three or four things happened," he said. "And I don't want to alleviate him from any responsibility, because we can't get flags in that situation."

Kitchens insisted the Browns have moved on from the incident, and said he wasn't bothered by the Ravens defending their player.