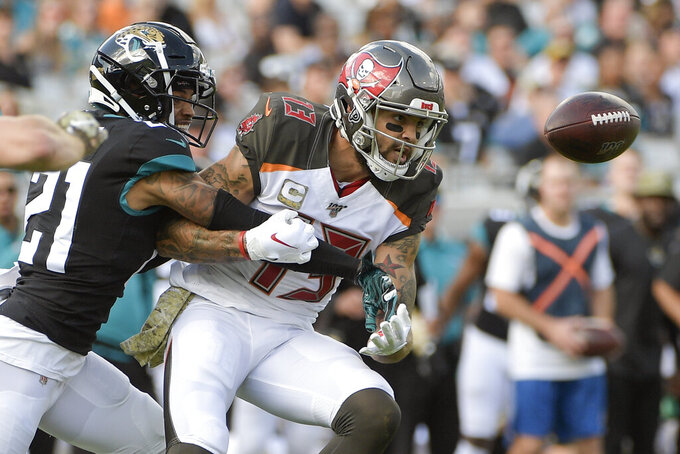 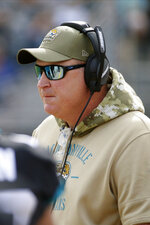 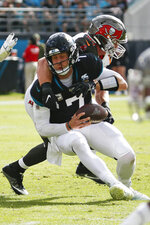 JACKSONVILLE, Fla. (AP) — The shouting could be heard as soon as the locker room doors opened.

Jacksonville Jaguars defensive end Yannick Ngakoue and center Brandon Linder were standing face to face and having a heated exchange before teammates stepped in to separate them. It was a clear sign the Jaguars are unraveling off the field as well as on it.

Nick Foles ended his first three drives with turnovers that Tampa Bay turned into touchdowns, costly mistakes that propelled the Buccaneers to a 28-11 victory over the Jaguars on Sunday.

It was Jacksonville's fourth consecutive loss by at least 17 points and could mean the end of coach Doug Marrone's tenure with the team. At the very least, the skid will have owner Shad Khan considering changes over the final month of the season.

Marrone, meanwhile, has to decide what to do at quarterback. He benched Foles at halftime — after a chorus of boos in his second start at home — and switched back to rookie sensation Gardner Minshew.

"One thing I didn't appreciate is all the booing today,” Minshew said. “You've got guys putting their hearts out there every play, every game, and nobody deserves that. I hated how that was."

Minshew rallied the Jags and had a chance to make it a seven-point game in the fourth quarter. But his hot pass slipped through Dede Westbrook’s hands and into Sean Murphy-Bunting’s arms for Jacksonville’s fourth turnover of the day.

“That is one thing that you can take and build off for a very long time,” Bucs coach Bruce Arians said of the pick after a goal-line stand.

A sixth-round draft pick from Washington State, Minshew started eight games while Foles recovered from a broken left collarbone and gave the Jaguars (4-8) a chance nearly every week. Foles, the 2018 Super Bowl MVP, never looked comfortable in his three games since coming off injured reserve.

He was downright awful against the Buccaneers (5-7), who have won two straight for the first time in Arians' first season.

“It’s what we are looking for,” Arians said. “We want to finish this thing strong. We will add them up at the end and see if it’s enough.”

Foles completed 7 of 14 passes for 93 yards, with two fumbles and an interception. He also was sacked three times and hit often — the latest subpar performance for Jacksonville’s offensive line.

"This is not an easy game,” Foles said. “A tough situation. ... It's a trial and the trials keep coming. It’s not easy, but I know where my heart is and where my faith is and what I'm going to lean on in this time.

“You never want to go through it. It's difficult. But you know what, I'm going to look at the bright things and keep my head held high."

The Bucs capitalized on each of Foles' miscues.

Rookie linebacker Devin White stepped in front of Westbrook and intercepted a pass on Jacksonville's opening drive. Peyton Barber took advantage of the NFL's worst rushing defense in November and scored his first of two touchdowns.

On Jacksonville’s next possession, linebacker Shaq Barrett beat rookie right tackle Jawaan Taylor and stripped Foles. White scooped up the fumble and ran 14 yards for a score. Barrett entered the game tied for the NFL lead with 12½ sacks.

“It was all Shaq on that play,” White said. “I just finished it off.”

Foles wasn’t done, though. He fumbled again on the team’s third drive, this time in the red zone. Carl Nassib got the strip-sack and the recovery. Barber’s second TD run capped an 83-yard drive.

Minshew completed 16 of 27 passes for 147 yards, with a touchdown, an interception and a fumble in the final minutes.

Buccaneers: Cornerback Jamel Dean left in the first half with a shoulder injury and was later ruled out. Guard Alex Cappa left with an elbow injury.

Jaguars: Linebacker Myles Jack missed the first game of his four-year NFL career, forcing Donald Payne into the starting lineup. Cornerback D.J. Hayden left in the third quarter with a neck injury. Defensive end Josh Allen, who broke the franchise’s rookie record with his eighth sack, was evaluated for a concussion and cleared to return.