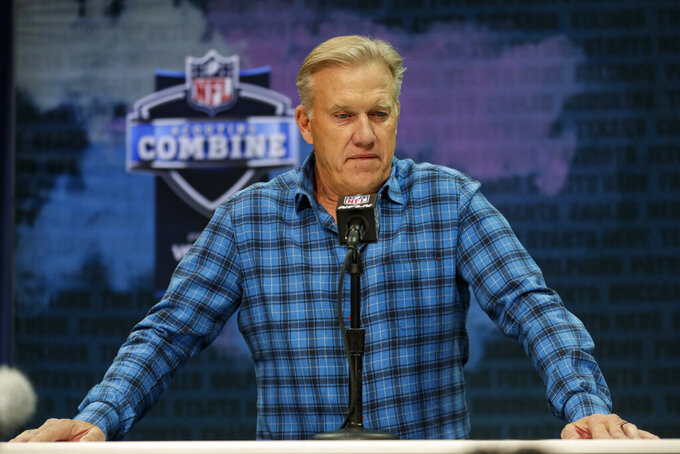 INDIANAPOLIS (AP) — Who wouldn't want to follow in the footsteps of John Elway and Eli Manning?

The Heisman Trophy winner, national champion and consensus No. 1 pick in next month's draft said Tuesday at the NFL scouting combine that he'd have no qualms playing in Cincinnati, which owns the top choice.

"Yeah, I'm not going to not play," the LSU star quarterback replied when asked if he would report to the Bengals should they select him No. 1 overall on April 23 in Las Vegas. "I'm a ballplayer. Whoever picks me, I'm going to go show up."

Burrow, who grew up in Athens, Ohio, and initially attended Ohio State, said he'd love to play professionally in his home state.

"Yeah, absolutely. It's 2 hours, 15 minutes from my house," Burrow said. "I could go home for dinner if I wanted to."

Burrow said on Dan Patrick's radio show last month that it was important for him to keep winning in the NFL and that while he wanted to be the first overall pick, "you also want to go to a great organization that is committed to winning. Committed to winning Super Bowls."

The Bengals haven't won a Super Bowl since entering the league in 1968.

Those comments sparked speculation that Burrow was skeptical about the Bengals.

“The only thing I’ve said is that I just didn’t want to be presumptuous about the pick,” Burrow said Tuesday. "That’s why I’ve been non-committal because I don’t know what’s going to happen. They might not pick me. They might fall in love with someone else. You guys kind of took that narrative and ran with it. There has never been anything like that from my end."

So, no reservations about playing for the Bengals.

"I'll play for whoever drafts me," Burrow said. "I'm just not going to be presumptuous about what they want to do. It's the draft. You guys have been covering it for a long time. You never know what's going to happen."

So, he's all-in on Cincinnati should the Bengals call his name on draft night?

Elway was the top overall selection in the 1983 draft, the vanguard of the greatest quarterback class in NFL history, but he didn't want to play in Baltimore and the Colts traded him to Denver, where he won two Super Bowls as a player and another as an executive.

Something similar transpired in 2004 when Manning was selected first overall by the San Diego Chargers but was quickly traded to the New York Giants, where he twice beat Tom Brady in the Super Bowl.

Elway spent four years searching for Peyton Manning's replacement in Denver before landing Drew Lock, so this marks the first offseason since 2015 that he isn't spending a lot of time on the QB prospects such as Burrow.

Instead, he's looking at the deep class of wide receivers that punctuate this year's rookie class.

Elway already has a Pro Bowl receiver in Courtland Sutton and a rising star tight end in Noah Fant. But nowadays teams have to load up at wide receiver and this year brings a wealth of talented pass catchers to choose from.

"Oh, I think this is one of the best groups since Odell's group," Colorado wide receiver Laviska Shenault said in comparing this year's crop to the one in 2014 that featured first-rounders Odell Beckham Jr., Sammy Watkins, Mike Evans, Brandin Cooks and Kelvin Benjamin.

"I think we're talented across the board," Shenault said. "I think we check a lot of boxes. I think this class is going to do great things. It's definitely going to be a legendary class."

Other highlights on a busy first day at the combine:

Burrow won't participate in on-field drills at the combine, but he is enjoying the process and the interviews. He jokingly tweeted he was considering retirement when his hand size was measured at a smallish 9 inches at the combine.

"I didn’t have a lot of fumbles or anything like that, so I just tried to make a little joke about it," Burrow said.

New Carolina Panthers coach Matt Rhule said he's "unbelievably excited to get a chance to work with Cam" Newton, the team's QB who's recovering from a foot injury that sidelined him last season. “I'm excited to get him healthy. Obviously that's the No. 1 goal for us.”

Rhule wouldn't commit to Newton being his starter if he's healthy, however.

“I probably won't say about anybody that they'll be a starter. Especially my first year, I'll try to be really disciplined about not promising things to certain guys,” Rhule said. “I'll just say that I really want him on the team and I really want him to be healthy. I know when Cam is healthy, who he is and the type of player that he is.”

Andy Reid is basking in the glow of his first Super Bowl title in his 366th game as a head coach in the NFL.

"It's sunk in. You only have a short time to enjoy that and you got to move on. That's where we're at," Reid said. “We took a little time off after the game, after the parade. Then we dove right back in and got busy and we're still doing that. Maybe some day when we are are out of the game, you can look back and say we looked pretty good. Now we're buckling down and making sure we take care of business.”

For the second time in four years, Kyle Shanahan is dealing with the aftermath of a fourth-quarter meltdown that cost his team a Super Bowl title.

“Every time we have a tough loss, it's a grieving process you have to go through,” he said. "It's disappointing, especially how much you go through. That's life. You deal with it. No one died. But we do have to grieve it. Right now, I think our team is made of the right stuff. I think it's important to our team and our guys to win and that's the type of guys we want in our building."

The Rams and Broncos left most of their assistant coaches home although they did bring their scouts to Indy.

"When we first decided that, we were going to wonder if anybody even noticed, but then the Rams spilled the beans because they copied us," Broncos coach Vic Fangio said. “I just felt, and John (Elway) agreed with my suggestion, that our time this week would be better spent back in the office. What the guys are doing all this week is just watching college tape Monday through Friday, every minute they're there. I think it's a much better environment to do that.”

Fangio said he'll re-evaluate after he sees how this experiment goes.

“It's a one-year trial kind of like OPI-DPI instant replay," he said.

By the way, Elway, who's on the NFL's competition committee, said the future of the pass interference challenge that was implemented last season on a trial basis won't be decided until just before the league's annual meeting in Palm Beach, Florida, March 29-April 1.