Chiefs could have Smith-Schuster back from injury for Rams 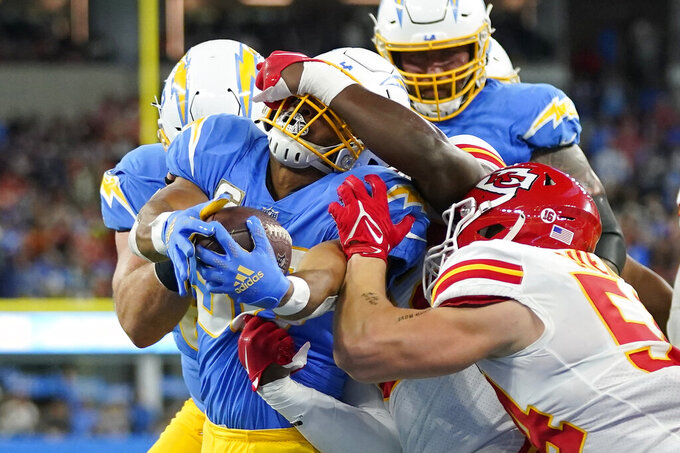 Los Angeles Chargers running back Austin Ekeler, left, scores a touchdown as he is face masked by Kansas City Chiefs linebacker Nick Bolton as linebacker Leo Chenal, right, tries to stop him during the first half of an NFL football game Sunday, Nov. 20, 2022, in Inglewood, Calif. (AP Photo/Jae C. Hong)

KANSAS CITY, Mo. (AP) — The Chiefs could have wide receiver JuJu Smith-Schuster back for this weekend's game against the Los Angeles Rams after he returned to practice Wednesday for the first time since landing in the concussion protocol two weeks ago.

Chiefs coach Andy Reid said that Smith-Schuster would need to get through a workout to officially clear the protocol, but signs point toward him being available Sunday. And that would be a major boost for a Chiefs offense missing wide receiver Mecole Hardman and potentially Kadarius Toney, who missed Wednesday's practice with a hamstring injury.

“Hopefully everything goes well with the protocol and stuff like that, he's ready to go,” Chiefs quarterback Patrick Mahomes said. “To have that energy on the sideline — he's a great player and a great teammate, and you always want to have those guys back in the huddle.”

Right guard Joe Thuney missed practice Wednesday with an ankle injury, though Reid said it's getting better. Safety Juan Thornhill worked out despite a calf injury and cornerback Jaylen Watson despite an ailing hand.

The Chiefs also made a series of roster moves, putting running back Clyde Edwards-Helaire on injured reserve with a high ankle sprain; they activated offensive lineman Lucas Niang to the 53-man roster after he spent the start of the season on the PUP list; and they signed tight end Kendall Blanton to the practice squad after an injury to Jordan Franks.

The decision to put Edwards-Helaire on IR comes shortly after the 2020 first-round pick ceded the starting job to seventh-round draft pick Isiah Pacheco. The Chiefs also have Jerick McKinnon in the backfield, though he's primarily a threat in the pass game, and veteran Ronald Jones II could be active for the first time Sunday.

“There's a chance he plays. I mean, a legitimate chance,” Reid said, “but within that he has to make sure he has all the protections down, the timing of the runs. Those are the things we look at. But he's been working at it.”

Smith-Schuster wound up missing only last week's 30-27 win over the Chargers after a vicious helmet-to-helmet shot from Jacksonville safety Andre Cisco the previous week left him laying motionless on the Arrowhead Stadium turf.

Smith-Schuster, who signed a one-year prove-it deal with Kansas City, has been more productive as he became more familiar with Mahomes and the offense. He caught five passes for 113 yards and a touchdown against Buffalo, seven for 124 yards and a score against San Francisco and 10 for 88 yards against Tennessee before getting hurt.

Justin Watson led the Chiefs with three catches for 67 yards against the Chargers last Sunday. Skyy Moore had the best game of his rookie season with five catches for 63 yards. The only other wide receiver in their depleted group to catch a pass was Marquez Valdes-Scantling, who had an 18-yard grab to show for his four targets.

The performance by Moore, a second-round draft pick, was perhaps the most encouraging of them.

“He’s been struggling at times but you know what? It never put him in a dark place,” Chiefs offensive coordinator Eric Bieniemy said. “We always knew exactly what he can do. He just needed that opportunity to just go out there and shine.”