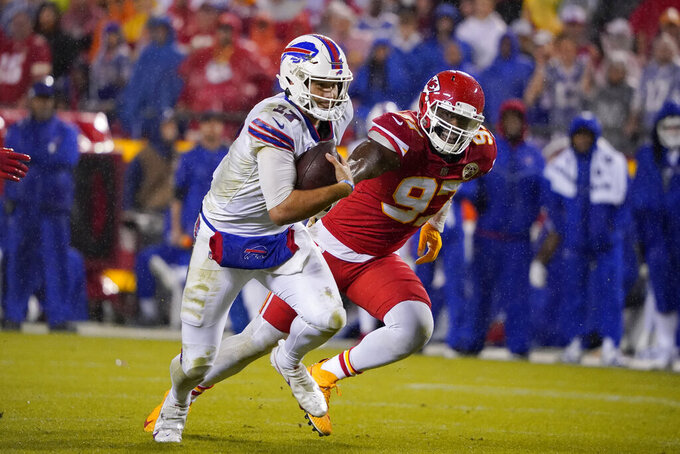 The All-Pro safety was tailing a play late in the first half Sunday night against Buffalo when Bills quarterback Josh Allen heaved a pass down the sideline. It soared over Mathieu's head, then right over that of safety Daniel Sorensen, landing in the hands of tight end Dawson Knox for a 53-yard touchdown reception.

Mathieu put his hands on the sides of his helmet in disbelief — an image that summarized their weather-delayed, defensive-deficient 38-20 loss to the Bills on Sunday night in a rematch of their AFC championship game.

“I mean, honestly just beating ourselves,” Mathieu said. “If you look back at it, the Ravens game — miscommunication, blown coverages. The Chargers game, the same thing. And tonight. I think most of the explosive plays were guys running wide open down the field. We're going to practice that. Coach and teach that and find a way to dig deep.”

That touchdown pass to Knox wasn't the first blown assignment by Sorensen, either. He also blew a tackle on Devin Singletary on second-and-10, watching him go for nine yards and nearly a first down, and the pass coverage on Stefon Diggs on a 61-yard reception later in the first half.

All of which must have made the hour-long lightning delay at the break seem like an eternity.

The rest of the Chiefs defense was nearly as bad. They watched the Kansas City offense turn the ball over four times without forcing one of their own. They gave up 315 yards through the air, 121 on the ground and 8.1 yards per play.

None of it should have been too surprising.

The Chiefs entered the game second-to-last in the NFL in total defense and scoring, and they were dead last in allowing 6.9 yards per play. And lest anyone think they are bad at one thing, consider this: They gave up 251 yards rushing to the Ravens a few weeks ago, then gave up 358 through the air in last week's game in Philadelphia.

It didn't help matters Sunday night that they played without Chris Jones, their best pass rusher, who had been ineffective the last couple weeks while nursing a wrist injury. Or that cornerback Charvarius Ward was out with a quad injury.

The problems facing defensive coordinator Steve Spagnuolo are a whole lot bigger than a couple injured players, though.

Some of it can be traced all the way to the top.

The Chiefs haven't selected a defensive player in the first round since 2015, when they selected long-departed cornerback Marcus Peters. Their second-round picks have been misses — defensive end Tanoh Kpassagnon in 2017 and Breeland Speaks the following year are also long gone, and Willie Gay Jr. has yet to be productive.

So the Chiefs have been forced to rely on players such as Sorensen, an undrafted free agent who has managed to cling to the bottom of the roster for years, and linebacker Ben Niemann, another heavily relied upon undrafted player.

The lack of investment in the defense has been evident all season.

It showed up again Sunday night.