Chiefs rookies report for training camp unlike any other 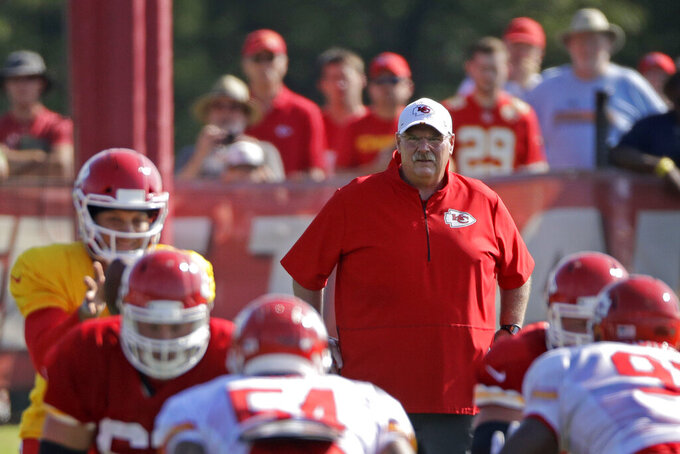 FILE - In this Monday, July 29, 2019, file photo, Kansas City Chiefs head coach Andy Reid watches a drill during NFL football training camp in St. Joseph, Mo. This was supposed to be the day that a bunch of wide-eyed rookies reported for their first training camp with the Kansas City Chiefs, lugging televisions and fans and other comfort items into the dormitories at Missouri Western State University. Instead, they were tested for COVID-19 and then sent home.(AP Photo/Charlie Riedel, File)

KANSAS CITY, Mo. (AP) — This was supposed to be the day that a bunch of wide-eyed rookies reported for their first training camp with the Kansas City Chiefs, lugging televisions and fans and other comfort items into the dormitories at Missouri Western State University.

Instead, they were tested for COVID-19 and then sent home.

The Chiefs began the intake process for first-year players Monday after the NFL gave them the go-ahead along with the Houston Texans, their opponent in the season opener Sept. 10.

But it could be quite a while before they get on the field: All players must test negative twice before they are admitted to the facility, then they will spend a couple of days doing the more routine physicals and getting their equipment sorted out.

“That could take you into four days here,” Chiefs coach Andy Reid said on a Zoom call Monday. “There's a point where we'll be able to have the guys lift and meet with them and do a potential walk-through with them.”

Like all NFL teams, the Chiefs did their entire offseason program remotely because of the pandemic. That means late this week or early next week could be the first time that first-round pick Clyde Edwards-Helaire, second-round pick Willie Gay Jr. and the rest of their draft class and rookie free agents meet with the coaching staff on the practice field.

It won't be at Missouri Western, either. The Chiefs are one of a handful of teams that still sequester themselves away from home for part of camp, but the virus has caused those teams to join the rest of the NFL in working out at their facilities.

The Chiefs have two full-size grass fields, a smaller field of artificial turf, a full-size turf field indoors and the use of Arrowhead Stadium just across the parking lot at their disposal. And it sounds as if they will use them all.

“We could have a ton of social distance, more than we have with our football team," Reid said. "It's all set up with monitors and everything else. Then the testing, these guys are going to be tested often. It'll be good that way. There's a responsibility for coaches and players to make sure we handle ourselves right when we're away from it. We are still keeping as much social distance as we can. It's a contact sport but when there's no contact we're going to keep our distance.”

Reid knows that the Chiefs and Texans will be supplying a blueprint for the rest of the league, which can have rookies report as early as Tuesday with veterans following July 28.

But he also understands that the NFL as a whole has an opportunity to show the general public the importance of proper safeguards in tamping down the virus spread.

“We’ll have our masks set up and do all the things — wash our hands — all those little fundamental things to stay on top of that,” he said. “Our staff has done a phenomenal job setting everything up to try to be COVID-safe the best we can.”

The Super Bowl champions are fortunate in that they return 20 of 22 starters — and 22 players that started at least one game — from the team that ended a 50-year championship drought in February. That means they are unlikely to lean too heavily on rookies that will have had little face-to-face work with coaches by the time the regular season begins.

Edwards-Helaire is expected to be the biggest contributor after a dazzling season at LSU last year. But he'll start out behind Damien Williams on the running back depth chart, taking some of the pressure off him. He also will have the luxury of Super Bowl MVP Patrick Mahomes under center and an armada of playmakers, including tight end Travis Kelce and wide receivers Tyreek Hill and Sammy Watkins, to share in the offensive load.

Gay could also make an immediate impact for a defense that was vastly improved last season, but that struggled at times to stop the run. The athletic linebacker out of Mississippi State also is expected to have a significant presence on special teams.

The NFL and players union are still discussing some elements of training camp, but Reid said he expects it to take about eight days before players are ready to take the field. That becomes 10 days to two weeks with days off.

“Once we get through physicals and COVID testing, then we'll just take it from there,” he said. “There will be another ramp-up for about a week where you might be able to put these padded shirts on. You get into the new CBA rules. But that's what we know at this point. It seems like a solid plan. It allows guys to ramp up and get where they need to be.”