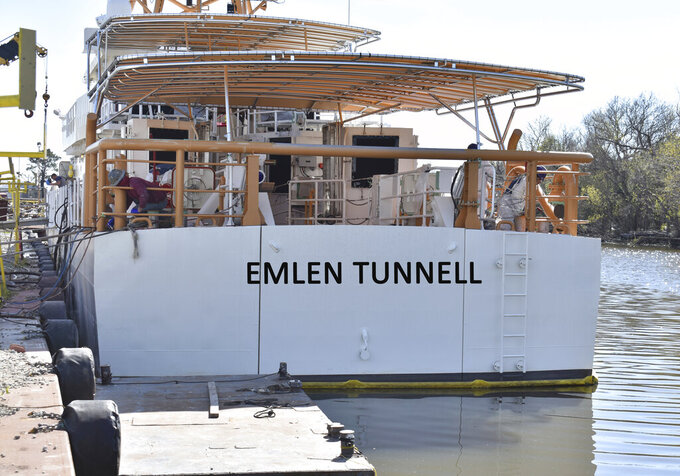 Before he became the first Black player inducted into the Pro Football Hall of Fame, Emlen Tunnell served in the Coast Guard during and after World War II, where he was credited with saving the lives of two shipmates in separate incidents.

Now, a Coast Guard cutter and an athletic building on the Coast Guard Academy campus are being named in honor of the former NFL defensive back, who died in 1975, as the service aims to highlight his little-known story and its own efforts to do better when it comes to race and celebrating diversity.

“I think it's important, because you have a teachable moment with young people when you talk about a guy like Emlen Tunnell,” Coast Guard Academy football coach C.C. Grant said. “They need to understand what he did, what he went through and what kind of a person he was.”

Tunnell was the first Black player signed by the New York Giants and later played for the Green Bay Packers. But not much was known about his Coast Guard service until 2008, when Cmdr. Bill McKinstry recognized Tunnell's name on the back of photograph showing a Coast Guard basketball team from the late 1940s.

His research uncovered a remarkable service career that Tunnell, who had been a steward's mate, had downplayed.

In April 1944, Tunnell was unloading fuel and explosives from a cargo ship in Papua New Guinea when it was hit by a Japanese torpedo. Tunnell used his bare hands to beat out flames that had engulfed a shipmate, suffering burns in the process. Two years later, while stationed in Newfoundland, Tunnell jumped into 32-degree Fahrenheit water to save another man who had fallen from the USS Tampa.

Given the context of what a Black steward's mate was expected or even allowed to do during that time in American history — largely restricted to duties like keeping the dishes on the ship clean — his accomplishments are all the more remarkable, McKinstry said.

“If you look at the pictures of him in uniform, he is the one African American in a sea of other people,” McKinstry said. “It is so important that we take a look at these trailblazers, just like Mr. Tunnell and we honor them, because of all things they faced in laying the groundwork for where we are today in making a better future.”

In 2011, the Coast Guard posthumously awarded Tunnell the Silver Lifesaving Medal. The cutter, currently under construction in Louisiana, is tentatively scheduled to be commissioned in October. The Coast Guard Academy plans to open the $3.5 million Emlen Tunnell Strength and Conditioning Center in September.

Tunnell played college football at Toledo before the war and after the war — he enlisted from 1943 to 1946 — continued his collegiate career at the University of Iowa, suffering a serious neck injury. But after leaving college in 1948, he hitchhiked from his home on Pennsylvania to New York for a tryout with the Giants.

He ended up playing 14 seasons in the NFL and when he retired as a player, he held league records with 79 interceptions, 1,282 interception return yards , 258 punt returns and 2,209 punt return yards. He then became a scout and one of the league's first Black assistant coaches, helping fully integrate both the Giants and the Packers, said David Lyons, an author who is writing a biography of Tunnell.

He died of a heart attack at the age of somewhere between 50 and 53 — his birth records were not clear.

He was the first Black man and the first defensive specialist to be enshrined in Canton. But he never gained the fame of contemporaries in other sports, such as Jackie Robinson, because he played at a time before football was widely televised or popular — and because of his humility, Lyons said.

“Emlen was a great Giant as a player, coach and scout," Giants co-owner John Mara said. “More importantly, he was a wonderful human being, which is why he was the most beloved person in our organization throughout his time with us. Vince Lombardi traded for Emlen in Green Bay because he knew Emlen would be vital in establishing a championship culture.”

"He brought those attributes to the Coast Guard, the Giants and the Packers, so this recognition is most fitting,” he said.

Tunnell's cousin, Yvonne Gilmore Jordan, said Tunnell endured racism, such as not being welcomed at hotels and restaurants with his white teammates. He was forced to sit out a Giants exhibition game in 1951 in Alabama, because the organizers would not allow Black players, Lyons said.

But Gilmore Jordan, 82, said her cousin endured those indignities by being kind to everyone and making jokes about his situation.

“You wouldn't think he was humble, because he looked very flashy and he was handsome, but he was really a very humble person,” she said. “He didn't ever let it get him down, he really didn't.”

The Coast Guard coach Grant, who is Black, said naming a cutter and a building on campus after Tunnell not only honors his memory, but also is another step in showing that the Coast Guard and its academy are committed to celebrating diversity.

Last June, the academy was criticized in a report from the Department of Homeland Security's inspector general for failing to properly address complaints of racial harassment on campus. The complaints investigated included episodes in which cadets used racial epithets, posed with a Confederate flag and watched and laughed at a blackface video in a common area.

“We just need to keep taking steps to make sure that every player, every cadet, every coach, every person of color here feels like they belong and they feel like they are being included and their voice is heard here on campus," Grant said.