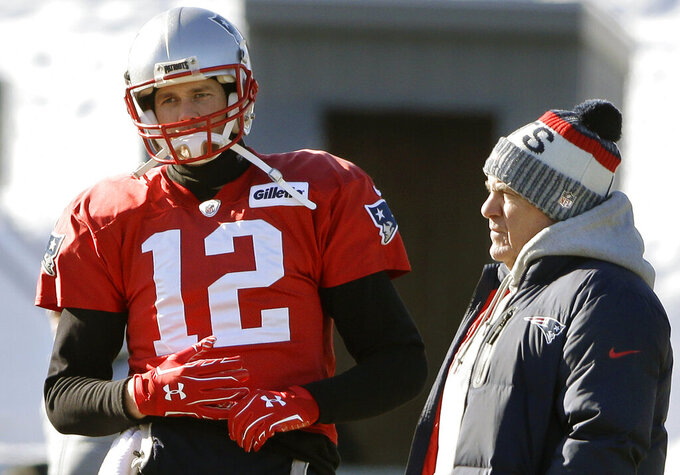 Tom Brady’s return to New England will surely be a massive lovefest, at least up until the moment he lines up under center Sunday night for Tampa Bay. With good reason, because there’s a lot to celebrate for the greatest quarterback of his time and the legacy he somehow keeps writing at the age of 44.

Everyone knows about the six Super Bowl rings for the Patriots and the late-game comebacks so numerous they’re hard to count. Brady also won 219 regular-season games for New England and was 30-10 overall in the playoffs, with 73 touchdown passes.

Along the way, he and coach Bill Belichick transformed the Patriots into a juggernaut the likes of which the NFL has never seen. Brady’s numbers are so impressive that he’ll be a first ballot Hall of Famer, assuming, of course, he ever decides to retire.

But while he gets well-deserved accolades for 20 seasons of spectacular work in New England, let’s not forget some other numbers.

At least five footballs softened by taking some air out of them in the 2015 AFC championship game against Indianapolis. A four-game suspension for Brady for his part in deflating them, and a $1 million fine and loss of two draft picks for the Patriots.

No, it probably won’t get mentioned on the NBC telecast because it doesn’t fit the narrative. Sunday’s game is a moment to celebrate a remarkable run with one team and one coach, not to dwell on the mistakes made along the way.

Like it or not, though, Deflategate is part of Brady’s legacy. It always will be, even though he steadfastly denies the allegations that led to his suspension.

It may not matter to New England fans, who for the most part believe their quarterback was unjustly punished to begin with. But it needs to be remembered, just like all the winning last minute drives and the Super Bowl wins.

The league suspended Brady after a 243-page report from investigator Ted Wells said two former equipment managers were involved in letting air out of the balls and that Brady “was at least generally aware” of the scheme.

In upholding the suspension, commissioner Roger Goodell noted that Brady destroyed his cell phone right about the time he met with Wells to answer questions about the deflated footballs. Goodell said Brady did so “even though he was aware that the investigators had requested access to text messages and other electronic information that had been stored on that phone.”

No, there was no smoking gun linking Brady to the deflation. He wasn’t caught with a needle and a bag of footballs behind the grandstands that day in Foxborough.

But there was enough circumstantial evidence for the NFL to come down — and come down hard — on the parties involved. Footballs don’t just suddenly deflate, especially when those in possession of the opposing team kept all their air.

Brady and the Patriots would go on to trounce the Colts in the game, leading 17-7 at half before the deflation was discovered, and winning 45-7. A few weeks later, Brady and Belichick celebrated as they won their fourth Super Bowl together, this one over Seattle.

Two years later, they would win the Super Bowl again, after Brady missed the first quarter of the season while serving his suspension. New England owner Robert Kraft thumbed his nose at Goodell, calling the win “unequivocally the sweetest” of all the team’s championship wins.

No single incident should define Brady’s career, of course, and Deflategate barely registers anymore when it comes to evaluating his incredible success. Winning six Super Bowls in New England and adding another in Tampa Bay while playing well into his 40s is what Brady will be remembered for, and he's done things no other quarterback can even hope to achieve.

Indeed, the most puzzling thing about Brady being involved in deflating game balls is that he seemed to feel he needed help to win. He didn’t, and if anyone thinks otherwise all they have to do is take a peek at the three Super Bowl rings he’s won since that year.

Just remember that even the greats aren’t necessarily perfect.