Column: Draft cements the marriage of Las Vegas and NFL 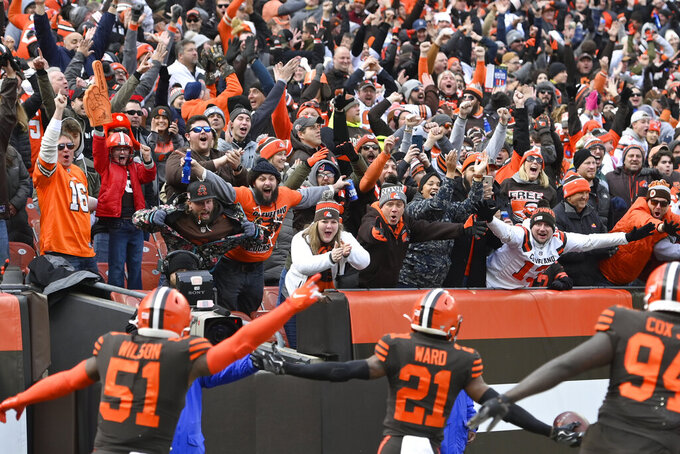 FILE - Cleveland Browns cornerback Denzel Ward (21) celebrates his touchdown with fans during an NFL football game against the Cincinnati Bengals, Sunday, Dec. 8, 2019, in Cleveland. The Cleveland Browns are betting on betting. The team announced a long-term partnership Tuesday, April 26, 2022, with Bally's that will make the gaming leader the official sports betting partner of the NFL team. As as part of the agreement, Bally's will have a branded lounge at FirstEnergy Stadium. (AP Photo/David Richard, File)

LAS VEGAS (AP) — The NFL brings the traveling circus that is its draft to a city where nothing — including 300-pound football players posing with showgirls and circus clowns above the Bellagio hotel fountains — is too outlandish.

As the draft begins Thursday, the marriage between the league and the gambling town it demonized for so long is nearly complete, with only a Super Bowl in 2024 remaining to formally complete the partnership.

The masses who will gather to see where their team might be heading in the next year will find the usual draft-day theatrics amid the bright lights of the casinos. Commissioner Roger Goodell will be on hand to announce and greet the first-rounders — dressed in their best suits and new team hats — and everyone watching will party like their team has just made the playoffs.

Interestingly enough, in a city built on betting, there will be little of it on the draft itself — and little at all on draft day. And, no, it’s not because the NFL objected to the idea of fans screaming in glee because they got good odds on the No. 5 pick.

Blame it on the caution of Nevada gambling authorities, who have never liked the idea of allowing betting on anything other than actual sporting contests at the sportsbooks that line the Strip. While other states new to sports betting offer more to bet on, Nevada has allowed bets on the draft only since 2017 — and all bets that include the name of a player must be made at least 24 hours before the draft.

Also, good luck finding a bookie willing to take more than a couple of hundred bucks on an event where inside information could potentially give a bettor a big edge.

“It might be my least favorite event to book,” said Jay Kornegay, a longtime oddsmaker who runs the Westgate SuperBook. “We’ve only done it a few years, but we haven’t fared well on it at all.”

That's largely, Kornegay said, because the so-called sharps in the past have gotten tips on picks before bookies themselves found out — the one thing every sportsbook operator fears most.

The guess is that, even in Las Vegas, betting on the draft isn’t the top priority for most of the tens of thousands of fans who will gather over three days for the annual spectacle. They’re there mostly to see who their team lands that might change its fortunes, and to be part of a scene that is becoming increasingly familiar since the NFL decided to take the draft on the road in 2015.

More than 600,000 showed up in Nashville in 2019 for the biggest draft party ever. Last year, Cleveland hosted a smaller but still respectable crowd of 140,000 over three days.

What happens in Vegas, though, will be tough for any future site to match. A city long used to hosting big events won’t have any trouble making this a glittering spectacle.

The future stars of the NFL will be introduced on a stage adjacent to the Caesars High Roller observation wheel, where each night free concerts will feature acts like Weezer, Ice Cube and Marshmello. The red carpet walk will take place on a stage built over the spectacular fountains of the Bellagio resort, where performers from Cirque du Soleil and Blue Man Group will also do their thing.

There will even be a pop-up sportsbook on site, though fans will have to be content with betting on baseball and the NBA playoffs because they won't be able to bet on the number of quarterbacks taken in the first round.

Indeed, the draft highlights how the NFL and Las Vegas are intertwined so tightly that it’s easy to forget the Supreme Court ruling that opened the path to legalized sports betting across the nation came just four years ago.

At that point, the NFL wouldn’t even allow players inside casinos for events. Now fans not only can bet on their team but go inside a casino and play a slot machine emblazoned with their team's helmet.

The hypocrisy of the NFL for so many years about sports betting remains head shaking, though there was nothing surprising about how the league embraced it once the floodgates opened.

Caesars, the de facto sponsor of the draft, is a prime NFL sponsor and one of three gambling companies that jumped on board when the league added sports betting as a sponsor category. There are sportsbooks being built at NFL stadiums and there isn't an NFL game that goes by without reminders to viewers about the point spread or odds on either team winning.

It’s easy money for the NFL. But it’s also payback for a city that helped build the league to what it is today by offering easily understandable point spreads for years that were used by fans and their favorite illegal bookies across the nation.

Now Las Vegas and the NFL are joined together for good in the common pursuit of the fan dollar.

The only real surprise is how normal it all seems.