Confident Jets aim to go from worst to first on defense 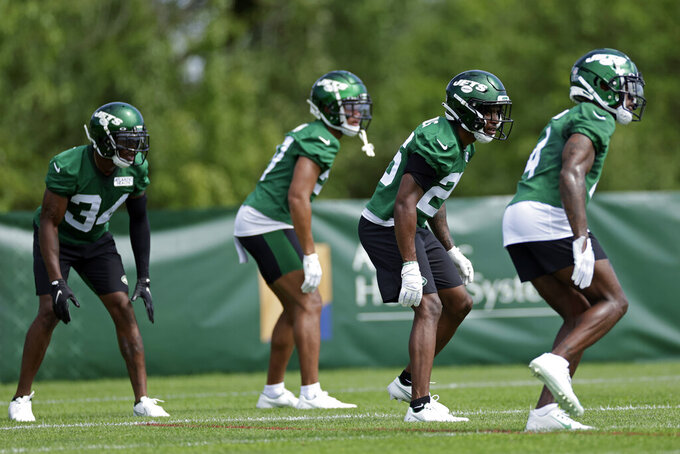 FLORHAM PARK, N.J. (AP) — Sheldon Rankins is not one to sugarcoat things or mince words. Like, ever.

So when the New York Jets defensive lineman was asked what he expects from the defense, he was straight-up honest.

“I think the expectations, to a man, have to be (to) be the best defense in the league,” Rankins said after practice Wednesday. “If we look at anything else or if we put any other goal out there, we’re selling ourselves short.”

Sounds great, of course. But this is also a defense that finished last out of 32 teams in total defense and scoring defense last season. The Jets were also near the bottom of the league in pass defense (30th) and run defense (29th).

So going from worst to first in one season might be some big-time wishful thinking, no?

“What’s the point of showing up to the race if you’re going to say, ‘Third is cool?’" Rankins said. "So for us, we want that target on our back. We want that challenge. We want to put that out there because it gives us something to go out there and chase every day.

“It’s easy to just say you want to be good. You know, that’s relative — what are you comparing it to? What is your barometer of what you’re trying to judge that against? But to say you want to be the best, everybody knows what that means.”

It's a mindset that has been adopted throughout the defense. The players talk about it regularly, especially those on a defensive line that is perhaps the team's biggest — and deepest — strength this season.

That's 17 players in camp on the defensive line, making for some tough competitions — and decisions for the coaching staff.

“We have a plethora of really good D-linemen,” coach Robert Saleh said. “The shame of it all is you’re probably going to end up having to release NFL players. That’s a good thing, though, at the same time with regards to the roster.”

It's an improved bunch, at least on paper, on both sides of the ball.

Lawson, who signed last season to be the Jets' primary pass rushing force, is back from a ruptured Achilles tendon that sidelined him all season. General manager Joe Douglas also added Martin and Thomas to help up front, along with drafting both Johnson and Clemons.

The Jets seriously upgraded their secondary in the offseason by signing cornerback D.J. Reed and safety Jordan Whitehead, and drafting Sauce Gardner with the No. 4 overall pick.

Kwon Alexander was signed last Friday to give the linebacker group another veteran playmaker to go along with C.J. Mosley and Quincy Williams.

“Oh, it’s going to be scary,” Williams said about the athleticism of the group. "For real, for real.”

Confidence is clearly very high for the Jets a week into training camp — and the defense fully intends on carrying that out on the field when the games begin.

Anyway, Rankins says, why shouldn't they feel this way? And then displaying his broad range of sports knowledge, the 28-year-old D-lineman used an Olympics track and field analogy to send his point to the finish line.

“For the people racing Usain Bolt, it must've sucked every time showing up, knowing you were going to come in second,” Rankins said. "But at the end of the day, nobody showed up thinking that. You know, the Tyson Gays, the Yohan Blakes, those guys showed up expecting to beat Usain Bolt. And if they didn’t, hey, listen, we’re going to line up to try it again.

“And that’s how we look at it. We’re going to go out there every day and expect to be the No. 1 defense in this league. And we’ll let the chips fall where they may.”

NOTES: QB Zach Wilson had by far his best day of camp — and on his 23rd birthday. He completed all eight of his passes in team drills, including a TD to Tyler Conklin. Wilson also had a 2-point conversion toss to Elijah Moore. “It’s the red zone periods that have been the sticking point for him,” Saleh said. “And today he was fast, he was deliberate, got rid of the ball, got to his second read on the one to Elijah Moore. I thought he did a really nice job.” ... RB Michael Carter returned to practice a day after being held out with an ankle issue. ... RB Ty Johnson (hamstring) and K Greg Zuerlein (toe) didn't practice. ... Curry (hamstring) missed a second straight practice. ... RB Tevin Coleman (illness) and rookie TE Jeremy Ruckert (foot) were activated from the non-football injury list.