Damon Arnette vows it's his time in second season with Vegas 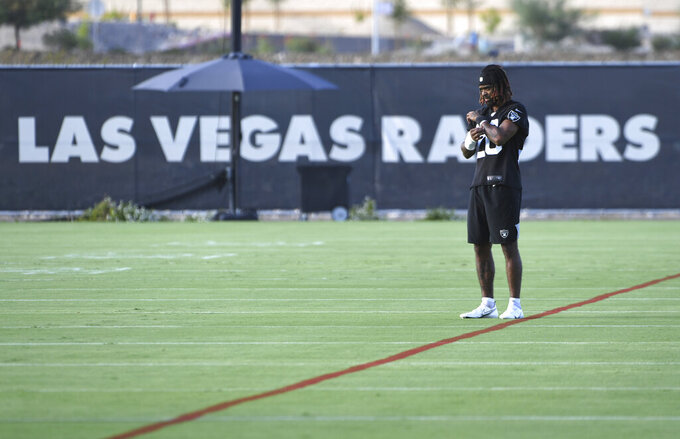 HENDERSON, Nev. (AP) — Looking back on a difficult rookie season, Las Vegas Raiders cornerback Damon Arnette refers to a song he wrote while riding on the team bus after the season finale in Denver.

Arnette, the 19th overall pick in the 2020 draft, disappears into his own thoughts while repeating a hook line to “My Time,” believing it depicts the upcoming season with the Raiders after playing just nine games last year: “New Year’s resolution is to do it on my time.”

Arnette fractured his thumb before camp last year and said he dislocated it during the team’s Week 3 game in New England and required surgery. He also dealt with a wrist injury, suffered two concussions and endured a severe case of COVID-19 last season.

“That did something to me internally, but the coaches and players have been nothing but supportive,” Arnette said during an interview with The Associated Press. “They stuck behind me through the disappointing rookie season. They never lost faith in me.”

Now, with an added 20 pounds of muscle and feeling much healthier than he did last summer — both mentally and physically — Arnette said he’s ready to prove it’s his time and is prepared to compete for a starting role within the deep Raiders secondary. There are 11 active cornerbacks or safeties who entered training camp with three years or less of NFL experience, and coach Jon Gruden and first-year defensive coordinator Gus Bradley have said all along the best talent will be on the field, regardless of experience.

The former star at national powerhouse St. Thomas Aquinas High School and second-team all-Big Ten selection at Ohio State said he is used to battling among the best.

“Competition is always fun — that’s when I play my best,” said Arnette, who finished his rookie campaign with 25 tackles (21 solo) and one tackle for loss. “That’s when the best comes out of me, when I’m up against competition and when I’m not just given a spot. It just means more, and people respect you more.”

Arnette is proud of the strides he’s made the past six months, something that hasn’t been lost on his older teammates.

“I love Damon, he’s a really good kid,” defensive end Maxx Crosby said. “I’m looking forward to him getting out there being healthy and playing to his full potential. He just had some unfortunate things going on, but I know he’s been working on himself as a person and working every single day."

Arnette also believes he’s arrived at training camp with a higher football IQ after admittedly playing recklessly as a rookie, knowing he abandoned discipline on the field for an overzealous approach that led to his concussions. Which is why, he said, for the next few weeks his focus will be on finishing plays, wrapping up opponents, keeping his head out of the initial contact, knowing when to go for the ball, and knowing when to leave certain plays alone.

“I gotta play smarter,” Arnette said. “I was just out there wild. I was out there always excited every play just trying to put somebody on their (butt) every play, whether they were bigger than me or not. And if they were bigger than me, that’s when I went harder and I did lead with my head when I really didn’t have any business even being on the tackle. That was a learning experience.”

Gruden was enthusiastic this week when discussing Arnette with reporters.

“He’s a big part of us moving forward,” Gruden said. “He was an incomplete performer for us last year, but he’s as good a corner as we have talent-wise on this team.”

Upon hearing Gruden’s comments, Arnette paused momentarily before revealing an appreciative and humbler side.

“It reassures me how he feels about me, and I feel like I owe him and the organization and my teammates for last year,” Arnette said. “It makes me feel good inside, but it also puts gas on the flame that I already have burning inside of me. I don’t want to let them down.

“I appreciate Raider Nation, but he’s the one who drafted me, him and (GM Mike) Mayock. So everything I’m doing right now is for my family and my teammates and my coaches.”