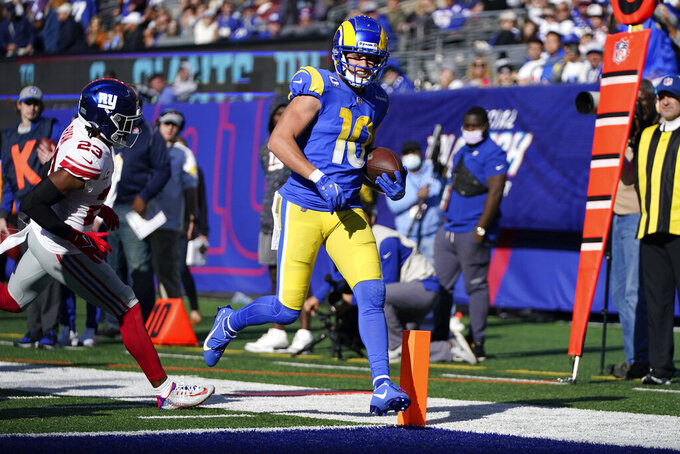 THOUSAND OAKS, Calif. (AP) — When Sean McVay called out his Los Angeles Rams for starting slowly in what would end up being a 38-11 rout of the New York Giants on Sunday, it could have been dismissed as a way to keep their attention with another losing team on deck.

Except McVay might actually have a point, as the Rams were held scoreless in the first quarter for the third time in their past four games.

“The enemy has a say as we all know, but I think there were some things execution-wise, and then I’m annoyed with myself on some decisions,” McVay said. “I think we can be in some better spots.”

After getting out to fast starts in their first two games, scoring 17 points in the opening quarter against Chicago and Indianapolis with new quarterback Matthew Stafford directing opening drives that ended in touchdowns, the Rams (5-1) have scored just 10 points since. That production came in a Week 4 loss to Arizona, where Stafford threw an interception to blunt Los Angeles’ early momentum.

Otherwise, the issues that plagued the Rams in the first quarter against the Giants reflected lingering concerns. Running back Darrell Henderson Jr. had two carries that netted a single yard, putting added stress on Stafford and the offensive line to generate production through the air. Stafford was sacked twice, both on third down, as the absence of balance gave an edge to New York’s pass rush.

But a home game against Detroit this week should give the Rams a chance to play up to their potential, as the Lions (0-6) have allowed 24 points in the first quarter. And wide receiver Cooper Kupp said it’s not the worst thing to have parts of their game to improve on, even as the wins keep on coming.

“I think it does speak to the standard we have as a team, as an offense, what we’re supposed to do, and I think we try to live it out everyday being process-oriented over results,” Kupp said.

When Stafford gets in a rhythm, the Rams’ aerial game is a thing of beauty. He was 22 of 28 passing for 251 yards and four touchdowns with an interception, relying primarily on Kupp as his main option. With another four completions covering at least 25 yards, big plays continue to come in bunches with Stafford at the helm.

Henderson and Sony Michel continue to be effective in closing out games, combining for 120 yards rushing on 30 carries.

However, McVay will have to give them more touches in the first half as the season goes on, if only to create more deep ball chances off play action as opponents recalibrate to defend Stafford.

Safety Taylor Rapp had two interceptions that the Rams offense was able to turn into touchdowns. Knee injuries kept Rapp out of the lineup at different times last year, giving then-rookie Jordan Fuller a chance to seize a starting job. But Rapp and Fuller are showing good chemistry this year, giving the Los Angeles secondary some much-needed stability amid a spate of cornerback injuries.

Special teams coordinator Joe DeCamillis’ group continues to struggle in his first season in charge. Penalties were a problem against the Giants, with two holding calls erasing gains on kick and punt returns and offsetting personal fouls wiping out a successful fake punt by Johnny Hekker.

Rookie CB Robert Rochell was shaken up in the fourth quarter but seems to be OK, which should allow the Rams to avoid another shakeup on the back end. Backup TE Johnny Mundt sustained a knee injury that McVay feared is serious.

It’s all about quarterback reunions, as Stafford faces the Lions for the first time after playing 12 seasons with the team that drafted him first overall in 2009. Goff went through plenty of highs and lows during his five years with the Rams before being traded, and it could be reflected in his reception from fans in Inglewood, California.