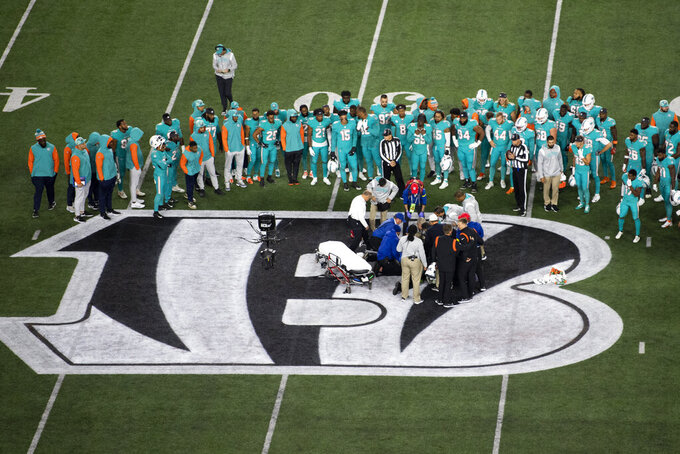 Teammates gather around Miami Dolphins quarterback Tua Tagovailoa (1) after an injury during the first half of an NFL football game against the Cincinnati Bengals, Thursday, Sept. 29, 2022, in Cincinnati. (AP Photo/Emilee Chinn)

Tagovailoa, who has been in the concussion protocol since Sept. 29, returned to practice in a limited capacity, though he will not play Sunday against the Minnesota Vikings.

“We just miss his personality. He's a guy that we rely on," Dolphins coach Mike McDaniel said.

The coach said there is a “scenario” where Tagovailoa could be medically cleared this week, but the QB will take things slowly, working out and throwing individually.

During the media viewing portion of practice, Tagovailoa could be seen stretching, laughing with coaches and teammates and throwing the football next to rookie quarterback Skylar Thompson.

Thompson will start Sunday against the Vikings as Tagovailoa and Teddy Bridgewater advance through the concussion protocol.

Tagovailoa suffered a concussion in the first half of a Thursday night game against the Cincinnati Bengals and had to be stretched off the field and taken to a hospital.

He had not practiced since and did not travel with the Dolphins for last Sunday's game, a loss to the New York Jets.

Four days before the Cincinnati game, Tagovailoa took a hard hit against the Buffalo Bills and appeared disoriented when he got to his feet. He was taken to the locker room and evaluated for a concussion. After he was examined and no signs of head injury were found under the NFL's protocol, Tagovailoa returned to start the third quarter, prompting an investigation by the NFL Players Association into the handling of his injury.

Last Saturday, the NFL and NFLPA agreed to make changes to the league’s concussion protocol, adding language addressing abnormality of balance and stability to its list of symptoms that would keep a player from returning to a game.

Bridgewater, who exited last week’s game against the Jets because of the league’s new concussion rules, worked individually with trainers Wednesday and could return to limited football activities Thursday.

If Bridgewater is cleared from the protocol this week, he will back up Thompson Sunday.

Thompson entered last week’s game against the Jets after Bridgewater took a hard hit on the Dolphins’ first offensive snap. Thompson completed 19 of 33 passes for 166 yards, no touchdowns and an interception.

McDaniel said he will likely decide whether to activate quarterback Reid Sinnett from the practice squad as a third gameday option later this week.