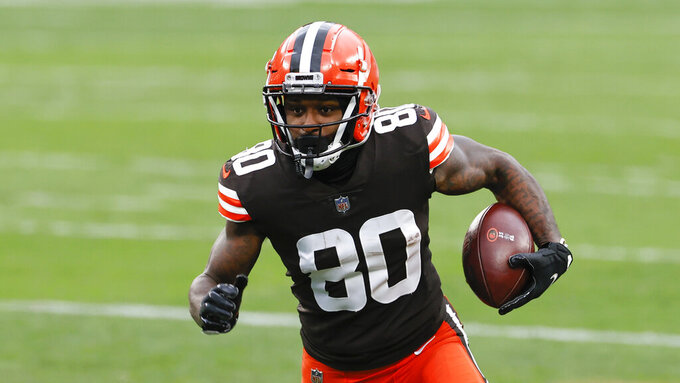 FILE - In this Nov. 1, 2020, file photo, Cleveland Browns wide receiver Jarvis Landry plays against the Las Vegas Raiders during the second half of an NFL football game, in Cleveland. The Browns will try to earn a playoff spot without four wide receivers, including star Landry, their starting middle linebacker and his replacement due to COVID-19 protocols. But despite the six players being out, an NFL spokesman said Cleveland's game at the New York Jets will be played as scheduled on Sunday, Dec. 27. (AP Photo/Ron Schwane, File)

Dwayne Haskins gets his second consecutive start for Washington with quarterback Alex Smith out again because of a right calf injury.

Haskins got the nod against the Carolina Panthers less than a week after being fined $40,000 and losing his captaincy for violating COVID-19 protocols.

With the NFC East title potentially on the line, Washington is also without top receiver Terry McLaurin because of a nagging ankle injury, but gets rookie running back Antonio Gibson back from a two-game absence with turf toe.

Carolina’s Christian McCaffrey is out for a sixth consecutive game, but the Panthers will have defensive end Brian Burns despite missing practice time this week with a knee injury.

Chargers wide receiver Keenan Allen will not play because of a nagging hamstring injury. Allen, who is second in the AFC with 100 receptions, suffered the injury during the Dec. 13 game against Atlanta. He tried to play four days later at Las Vegas but was extremely limited.

Defensive end Joey Bosa is also out because of a concussion and shin injury, and Denver will be without Pro Bowl linebacker Bradley Chubb because of an ankle injury he suffered in a Dec. 19 loss to Buffalo.

Philadelphia receiver DeSean Jackon is active against Dallas after missing two months with an ankle injury. Cowboys running back Ezekiel Elliott is active after missing a game because of injury for the first time in his career last week. The two-time rushing champion has been battling a calf issue.

Each team already had a starting linebacker ruled out: Duke Riley (biceps) for Philadelphia and Leighton Vander Esch (ankle) for Dallas. Vander Esch’s injury could result in Sean Lee making the first start of his 11th season.

The Seattle Seahawks have made defensive tackle Damon “Snacks” Harrison inactive against the Los Angeles Rams.

Harrison posted to social media on Sunday morning indicating he would be leaving the Seahawks following a report from NFL Network that he had asked for his release.

Harrison being inactive against the Rams comes as the Seahawks welcome defensive tackle Bryan Mone back from injured reserve following a lengthy stint because of an ankle injury.

The Rams were without rookie running back Cam Akers, who had already been ruled out with an ankle injury. Akers is the Rams leader in yards rushing with 591 on the season.