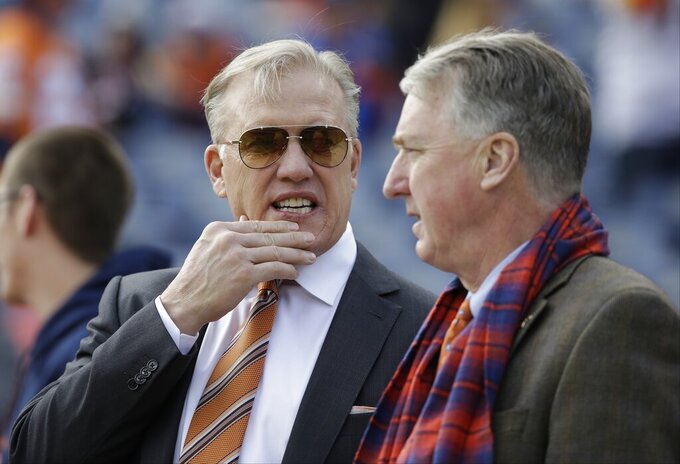 FILE - In this Sunday, Jan. 1, 2017 file photo, Denver Broncos general manager John Elway, left, stands with Broncos President and CEO Joe Ellis, right, before an NFL football game against the Oakland Raiders in Denver. The Denver Broncos' new general manager will join an organization embroiled in a family ownership feud and will work in the shadow of John Elway, whom team president Joe Ellis described as "the most important and impactful person" in franchise history.(AP Photo/Jack Dempsey, File)

ENGLEWOOD, Colo. (AP) — The Denver Broncos’ new general manager will join an organization embroiled in a family ownership feud and will work in the shadow of John Elway, whom team president Joe Ellis described as “the most important and impactful person” in franchise history.

Even so, Ellis said Tuesday he’s not worried about those factors repelling top-flight candidates to take over a team that’s gone 32-48 since winning Super Bowl 50 five years ago.

Ellis insisted “this is an attractive job” for an aspiring GM who would have final say on the draft, free agency and the roster but would have to run the especially consequential decisions past Elway, who is staying on as president of football operations while shedding his GM duties after 10 years.

Ellis said the new GM will be given every resource to compete, whether it’s Brittany Bowlen who ends up as controlling owner, as the team’s trustees prefer, or the $3 billion franchise is ultimately sold, as favored by some of late owner Pat Bowlen’s other children.

“Now look, we haven’t been successful lately, I get it. My head’s not in the sand,” Ellis said. “But we certainly have the resources; that’s not an excuse and we’ll make that clear to every candidate.”

Ellis said he and the other two trustees will wait for a July 12 trial in Arapahoe County District Court before determining whether to put the team up for sale.

Two of Bowlen’s children, Beth Bowlen Wallace and Amie Klemmer, are challenging the trust’s validity, and last month Wallace called for a “smooth and timely transition” to new ownership that would lead to the lawsuit being dropped.

The NFL established a new rule in November requiring each team to have a designated “controlling owner,” but Ellis said the league realizes the litigation is slowing down that process in Denver.

“I know the league will want us to reach resolution as soon as we can. But the trial is going to have to happen first and it will have to verify and validate Pat’s trust and our ability to execute it,” Ellis said.

Ellis said he likes the new power structure that will have the new GM and coach Vic Fangio both reporting to Elway, who will step away from the daily grind of the demanding gig.

“That makes some sense because John’s football acumen is — while I know people question some of the performances of the team and that reflects on John — I believe he knows what it takes to win,” Ellis said.

“As for being under the shadow of John, I don’t worry about that,” Ellis added. “I’ve had a lot of discussions with John Elway over these 10 years about where our organization stands and how we’re performing, and John’s got a really good grasp of where we stand from a 50,000-foot level and that will continue, and I know that he won’t meddle and he won’t get in the way.”

The arrangement is only for 2021, the final year of Elway’s contract, although Elway said he’d be open to continuing in his new role beyond this year.

Ellis is taking a wait-and-see approach.

“Yeah, I’m looking at this very short-term right now,” he said. “I haven’t thought much past that. I know John will always be part of the Denver Broncos. He has spent his whole life here since the day he left Stanford and this community — I shouldn’t speak for him — but I know this community means a lot to him.

“I know the Broncos mean a lot to him and he will always be a Denver Bronco and he’ll always want to be a part of it in some form or fashion. I don’t know what that is today. I don’t know that John knows what it is today. We’ll talk through that,” Ellis said. “But for now our eyes are laser-focused on bringing in the right general manager and turn a corner and go in a new direction in some respects that will help us get better.”

Ellis has reached out to several potential candidates but confirmed only the one he’s received permission to interview: Champ Kelly, the Bears’ assistant director of player personnel, who spent eight years in the Broncos’ personnel department and four years with Fangio in Chicago.

Although Elway or Fangio have said they’d like to see Von Miller, Justin Simmons and Shelby Harris stick around, the new GM will have his say.

The front-office shakeup also might put quarterback Drew Lock’s starting job in jeopardy, along with that of his play-caller, offensive coordinator Pat Shurmur, even though Fangio said his entire coaching staff is safe.

Fangio’s own job appears safe despite a 12-20 record, similar to the 11-21 mark that got predecessor Vance Joseph fired.

That’s because Fangio will join Elway and Ellis in leading the search for the new GM, and it’s inconceivable that the new hire would then turn around and jettison Fangio.