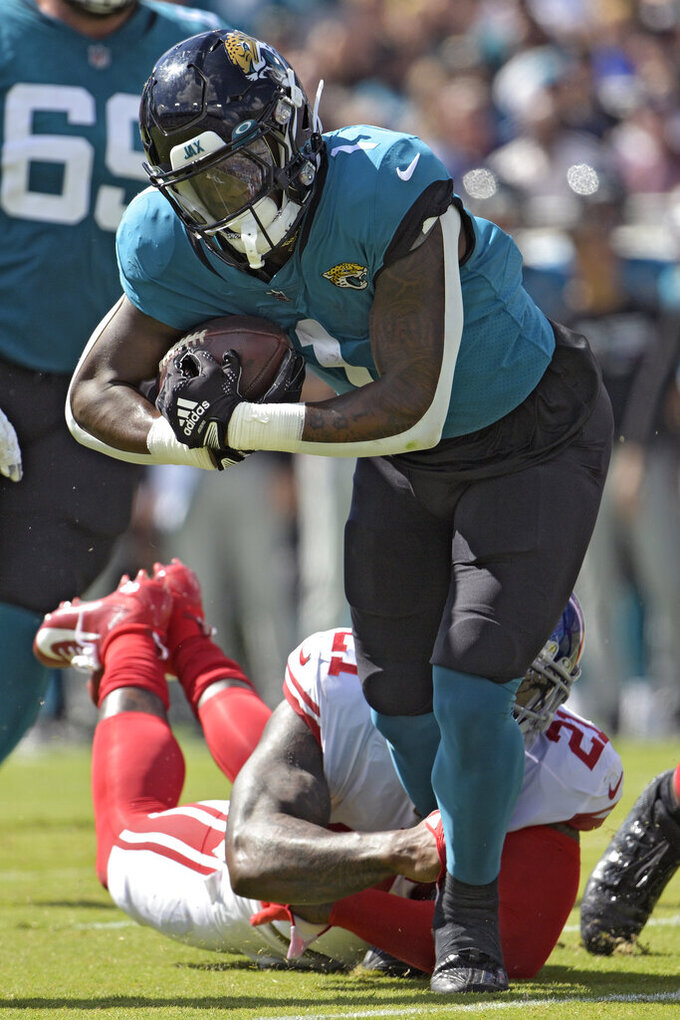 Receiver Marvin Jones, who has never lost a fumble in his 11-year professional career, walked Etienne through how to better grip and secure the ball. Their exchange came in the locker room more than half an hour after Jacksonville’s fourth consecutive loss, a 23-17 nail-biter to the New York Giants.

The game came down to the final play, with the Giants stopping receiver Christian Kirk a yard shy of the end zone. But Etienne’s fumble was one of several avoidable mistakes that propelled the Giants (6-1) to their first win in Jacksonville (2-5) in four tries.

“I feel like I could have played much better, feel like I left a lot of plays out there,” Etienne said. “It really put a damper on that."

Jones took it upon himself to give Etienne some tips while trying to help the second-year pro get over the feeling of letting down the team.

“It’s great because he’s been there,” Etienne said. “He was just telling me it’s a marathon, not a sprint. Just letting me know to never stop believing in yourself."

Etienne was on his way toward a potential touchdown late in the second quarter when he allowed the ball to hit his knee and bounce into the end zone. The Giants recovered for a touchback and then drove for a field goal, a 10-point swing in a tight game.

“When you see the end zone as a football player, your eyes just get so wide,” Etienne said. “That’s where you want to be. You’ve got to quiet your mind.”

It was an unfortunate gaffe and helped offset what could have been a breakout performance for Etienne, a second-year pro who missed all last season with a foot injury. Etienne ran 14 times for a career-high 114 yards and scored the first touchdown of his career.

Of course, he probably should have had a pair of scores. He also slipped on a trick play, resulting in an incomplete pass from Kirk, and picked the wrong lane on a third-down screen pass that forced Jacksonville to settle for an early field goal.

“Just ready for next week and trying to right my wrongs,” Etienne said.

The Jaguars will play a “home game” at Wembley Stadium in London against Denver (2-5) on Sunday.

The Jaguars are finding success on third down. They were 6 of 13 against the Giants and have converted nearly 46% on the all-important down the last three games. They rank fifth in the AFC and 10th in the NFL in third-down conversion rate.

Trevor Lawrence is a big reason for Jacksonville’s rise. He’s mobile, accurate and has the arm to fit passes into tight windows. He has the franchise looking to finish above 41% on third down for the first time since 2009.

Jacksonville’s pass rush has become almost non-existent. No. 1 pick Travon Walker sacked Daniel Jones in the third quarter — the rookie’s first since Week 1 — but that was one of just three quarterback hits for the Jaguars. And the defense’s latest lackluster performance came against an offensive line that lost two starters in the first half.

It also came on the heels of a game in which Jacksonville barely touched Indianapolis’ Matt Ryan. Jacksonville has 11 sacks, which is tied for 26th in the league.

Kirk caught seven passes for 96 yards against New York, better production than his last three games combined. He had six receptions for 95 yards in the previous three weeks. It’s clear that the Jaguars need to get Kirk, one of their top playmakers, involved.

Running back James Robinson didn’t get a carry, an indication he had fallen out of favor with Jacksonville’s new coaching staff. He was traded a day later. A person familiar with negotiations said the Jaguars shipped Robinson to the New York Jets on Monday for a conditional late-round draft pick. The person spoke to The Associated Press on condition of anonymity because the deal was not finalized.

Robinson still needs to pass a physical, and coach Doug Pederson said Monday that Robinson was dealing with “lower-body issues mostly in his knees right now.” Robinson, however, wasn't on the injury report last week and didn’t seem to get hurt during his 12 snaps against the Giants.

Starting CB Shaquill Griffin (back) is expected to return this week.

.500 – Jacksonville is 4-4 in London, including a victory against Miami last year at Tottenham Hotspur Stadium.

Find a way to end another skid. This is Jacksonville’s 13th losing streak of four or more games since owner Shad Khan bought the franchise in 2012.