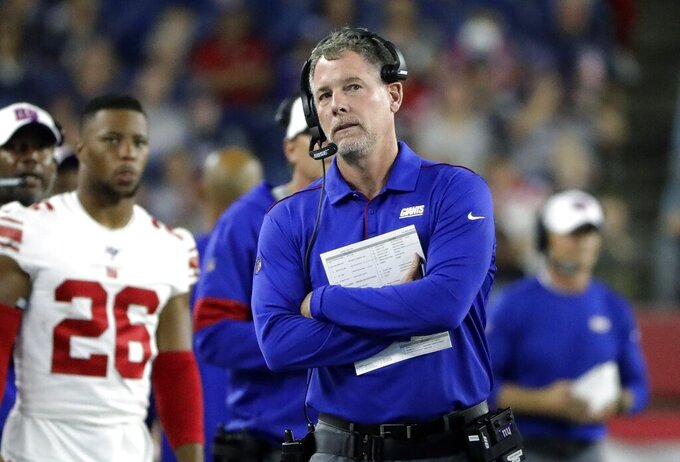 EAST RUTHERFORD, N.J. (AP) — There's been a lot of time spent in the New York Giants training camp deciding when rookie quarterback Daniel Jones will get a chance to play this season.

Much will depend on how Eli Manning plays and whether the Giants can be competitive in their second season under Pat Shurmur.

However, winning may depend more on the play of the defense in its second season under James Bettcher. It starts Sunday against the NFC East champion Cowboys in Dallas.

The Giants allowed 412 points last season (5-11). They lost eight games by seven points, including five by three points or less. The defense allowed the winning points to be scored four times within the final 1:12.

There've been a lot of changes in the offseason. Perennial Pro Bowl safety Landon Collins signed with the Redskins as a free agent. Linebacker and leading sacker Olivier Vernon was traded to Cleveland. Inside linebacker B.J. Goodson fell out of favor and was recently shipped to Green Bay.

Safety Jabrill Peppers was acquired in the Odell Beckham Jr. deal, and safety Antoine Bethea and linebacker Markus Golden were signed as free agents. Tackle Dexter Lawrence II and cornerback DeAndre Baker were drafted in the first round, while linebacker Ryan Connolly and defensive backs Julian Love and Corey Ballentine were taken in later rounds.

"I think we're all waiting and we're anxious to see what we can do in a 60-minute football game," Bethea said. "Obviously, in preseason you get glimpses here and there, but you really don't get the full thing. Going on the road, a hostile environment for our first test, it will be good for our defense."

While the defense played well in the preseason, it had a bad habit of getting off to slow starts. The Jets and Sam Darnold raced down the field for a touchdown in the preseason opener and the Bears' second team offense drove against the Giants' top unit before settling for a field goal.

Bettcher likes what he's seen in camp. This group has worked hard and gets annoyed when questioned about last year.

The big question will be whether the 3-4 front can stop the run and put pressure on opposing quarterbacks. New York gave up an average of 118.6 yards rushing last season and finished with a paltry 30 sacks.

Lawrence is a big body in the middle, but the Giants are hoping to keep teams guessing by moving him and tackles B.J. Hill and Dalvin Tomlinson up front.

"I can't tell you 100 percent as we sit here today who's going to be the sack leader, the disruptive player," Bettcher said. "To me, I kind of like that, because there is a little bit of unknown for people that are prepping for us. There's a lot of guys that have something to go play and prove and establish themselves. I think it's going to be exciting for me as I watch it from my position to see how it unfolds."

NOTES: Right tackle Mike Remmers practiced fully Friday and should be ready for Sunday. The veteran missed Wednesday's practice because of an illness and a back problem. He was limited Thursday. "I feel great, ready to go," Remmers said Friday ... Shurmur plans to dress two quarterbacks against Dallas, Manning and Jones, the No. 6 pick overall in the draft. Veteran Alex Tanney will be inactive. ... Rookie WR Darius Slayton (hamstring) and TE Garrett Dickerson (quad) have been listed as out.