Give Shurmur credit for making change from Manning to Jones 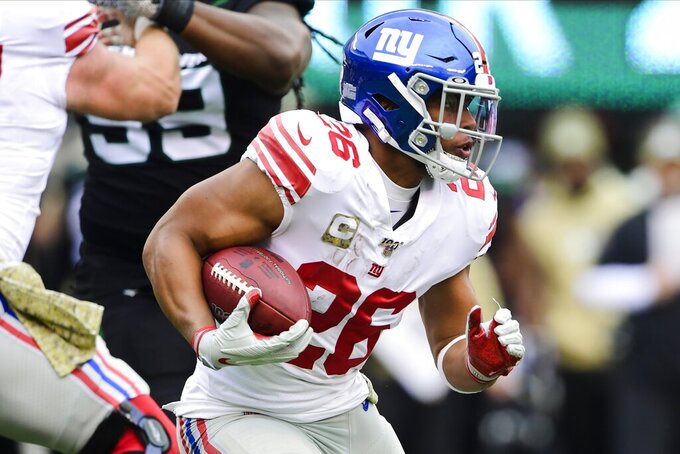 EAST RUTHERFORD, N.J. (AP) — With six games left in his second season as coach of the New York Giants, Pat Shurmur doesn’t have a lot to show for his tenure.

His record is 7-19 and the Giants (2-8) are going into their bye week on a six-game losing streak. If they lose one more, it will guarantee a third straight losing season. Also very likely are a third straight year out of the playoffs, and seven out of eight overall out of the postseason since winning the Super Bowl in February 2012.

Co-owner John Mara has not talked about the team with the media since training camp so his thoughts about its struggles and the future of Shurmur and general manager Dave Gettleman are uncertain.

The previous time he spoke with the media, Mara had said he wanted to feel positive about the team’s future after its final game this season.

Mara will eventually talk about the team again and probably vent a little since he hates losing. People might lose jobs.

Before that happens, there are a couple of things to be said about Shurmur after 10 games with a young team.

The 54-year-old former offensive lineman has kept the locker room together despite the losing. Even more important, he had the guts to sit two-time Super Bowl MVP Eli Manning after two losses to start the season and make the quarterback switch to Daniel Jones, the sixth pick overall in the draft.

There is no doubt Jones has made more than his fair share of mistakes over the past eight games as a starter. His 16 turnovers since becoming the starter are unacceptable. His is learning though and for the first time in more than a decade the Giants know they have a replacement for Manning on the roster.

It’s another Eli, but this one has wheels to go along with a good arm and keen mind.

“I think he’s been extremely patient with me and supportive of me. I’ve been up and down, I’ve played well at times and not so well at times,” Jones said. “He’s continued to support me and continued to coach me hard and give me the points of emphasis or the things that I need to be looking at closer. I think that’s been a huge help for me. Like I said, his experience coaching quarterbacks, his experience coaching offense has been awesome for me.”

Jones has impressive numbers. The 22-year-old Duke product has completed 187 of 297 passes for 1,984 yards and 15 touchdowns. His 208 yards rushing is second best on the team behind Saquon Barkley, who has 402 on three times as many carries.

“He has made some mistakes and that is going to come with a rookie quarterback, but he also has made some phenomenal throws, phenomenal plays,” center Jon Halapio said. “It’s things you want to see out of a No. 6 draft pick. He is doing well and managing the game experience. I’m excited for him. I have been a big Daniel Jones fan since he got here.”

The problem for Shurmur is Jones isn’t the only young guy making mistakes.

Cornerback DeAndre Baker, the third of the team’s three first-round draft picks this spring, has struggled. Linebacker Lorenzo Carter and defensive tackle B.J. Hill are not living up to expectations in their second season and Barkley, the 2018 NFL Offensive Rookie of the Year, has struggled since sustaining a high ankle sprain in the third game.

Even the older guys have messed up, particularly on the defense. The team though is playing hard.

Barkley intends to keep on playing until he can’t.

“I feel like myself,” he said. “I would love to be going for 100 yards every game, I would love to be doing the things I was doing last year. I don’t like the fact that I was able to have 1 yard against the Jets, a great team, respect to them. I feel like when you see me get in open space I still was making people miss.”

If Jones stops turning the ball over and Barkley returns to his form of a year ago and everyone else stops making mistakes, maybe the final six games will be different for the Giants.