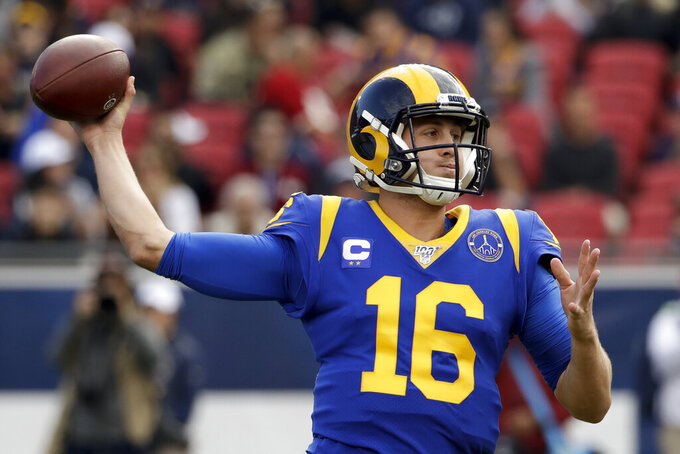 Floyd and Robinson agreed to join the Rams as free agents several weeks ago, but the announcements of their deals were delayed because they hadn't been able to complete their physical exams because of the pandemic.

Goff agreed last year to a four-year contract extension with an NFL-record $110 million guaranteed. The extension doesn't begin until the 2021 season, but Goff agreed to restructure the deal's money distribution to create breathing room for the Rams.

“I don’t see why not,” Goff said this month. "It doesn’t change anything for me, and it helps the team out.”

Los Angeles is stretched near the limits of the salary cap even after releasing star running back Todd Gurley, trading receiver Brandin Cooks and losing several key players in free agency. In the past two years, the Rams have handed out the biggest contracts in NFL history for a quarterback, a running back and a defensive player.

Floyd joins the Rams after four seasons with the Chicago Bears, where he played under new Rams defensive coordinator Brandon Staley. He is expected to help out with pressure from the edge after the Rams lost Dante Fowler in free agency and released Clay Matthews to save money.

Robinson spent the past four seasons with the Detroit Lions. The Rams signed him as a probable replacement for longtime defensive tackle Michael Brockers, but the two will play together this season after Brockers returned to Los Angeles when his free agent deal with the Baltimore Ravens fell through over concerns about an ankle injury.

The Rams didn't have a pick in the first round of the current draft after trading it to Jacksonville for star cornerback Jalen Ramsey last season.