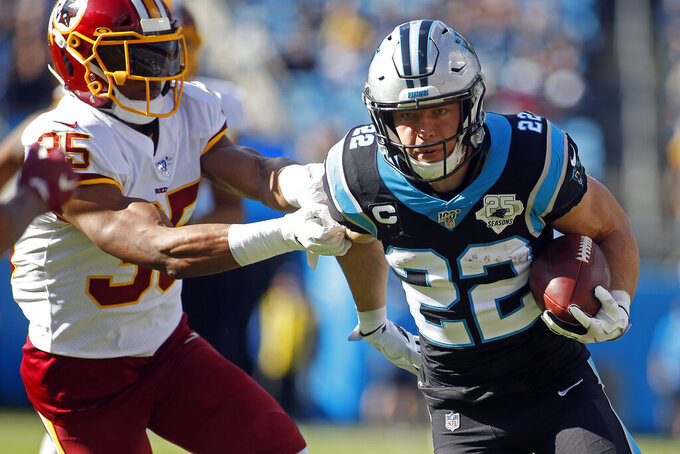 CHARLOTTE, N.C. (AP) — The Washington Redskins have struggled all season to run the ball and score points.

But veteran running back Adrian Peterson believes the Redskins have finally found “the right recipe” with a two-pronged rushing attack, one they used to overpower the Carolina Panthers on Sunday.

Derrius Guice racked up 129 yards and two touchdowns on the ground, Peterson ran for 99 yards and a score and the Redskins made a late goal-line stand to secure a 29-21 victory over the Panthers for their second straight victory.

The Redskins piled up 248 yards rushing and scored a season high in points.

“Guice and I talked throughout the game,” Peterson said. “We have a signal if we need each other to come in. Especially if that guy’s rolling, we’ll let him spin.”

Guice, who had only 74 yards rushing and no touchdown in his entire NFL career coming in, averaged 12.9 yards per carry against a Carolina defense that came into the game ranked 27th in the league against the run.

“I’ve always had confidence,” said Guice, who tore the ACL in his left knee last year as a rookie. “I’ve just had bad luck, so I haven’t been able to show it.”

“I want him to be successful,” Peterson said. “That’s what he needs. I’m always rooting him on. I’m in his corner, and we can do this together.”

“I’m not worried about my future,” Rivera said after the game. “I’m worried about this football team. We have a game coming up on Sunday.”

The Redskins spotted the Panthers a 14-0 lead after quarterback Kyle Allen opened the game 8 of 8 passing for 106 yards with touchdown passes to wide receivers Curtis Samuel and D.J. Moore on Carolina’s first two possessions.

“They got us schematically early in the game,” said Redskins linebacker Jon Bostic. “We switched up some of our calls and played some things differently with leverage. Nothing complicated, but sometimes it’s just being in a better call.”

Then, after most of the Carolina fans had left the stadium, the Panthers executed a perfect onside kick with Jermaine Carter recovering near midfield to give Allen one more chance. The second-year QB moved the Panthers to the 1-yard line, but Washington stopped Carolina on four straight downs with Chris Odum sacking Allen after a 23-yard loss and Nate Orchard recovering the loose ball giving the Redskins their first win here since 1998.

Both Odum and Orchard were signed to the active roster earlier this week.

“It’s about making a play when it matters,” said Allen, who has lost five of his last six starts after winning his first five.

This was the fourth time this season the Panthers have reached an opponent’s 3-yard line needing a touchdown for the tying or go-ahead score, but come away with nothing with the game on the line.

As in the previous three, it was McCaffrey who was stopped short of the goal line — this time on first and second down in the final seconds. The Panthers tried to throw on third and fourth down but Allen eventually was sacked and fumbled, ending the drive.

“That’s hard to take,” Rivera said. “It’s a game of inches, and inches weren’t on our side this time.”

The loss all but eliminates the Panthers from playoff contention in the NFC, leaving them 3 ½ games behind the Vikings in the race for the second wild-card spot.

“The most disturbing thing is that we have a great team,” said Panthers wide receiver Jarius Wright.

Redskins linebacker Ryan Anderson was ejected after delivering a helmet-to-helmet hit on tight end Greg Olsen. The Panthers announced Olsen has entered the concussion protocol and he did not return. Olsen appeared to tuck his head while approaching contact when Anderson came flying in and hit him straight on with his helmet. Olsen remained on the field for about a minute after the hit and the crowd booed relentlessly as replays were shown on the scoreboard.

Redskins: Redskins returner Trey Quinn left the game in the second quarter with a concussion after taking a shot to the head from DeAndrew White while going low to field a punt. Quinn didn’t call for a fair catch, but White was flagged for a helmet-to-helmet hit. ... Right tackle Morgan Moses left the game with a back injury and linebacker Montez Sweat injured his quadriceps.

Panthers: Defensive tackle Gerald McCoy (ankle) and linebacker Brian Burns (back) missed portions of the game with injuries, but both returned.

Redskins: Visit the Packers on Sunday.