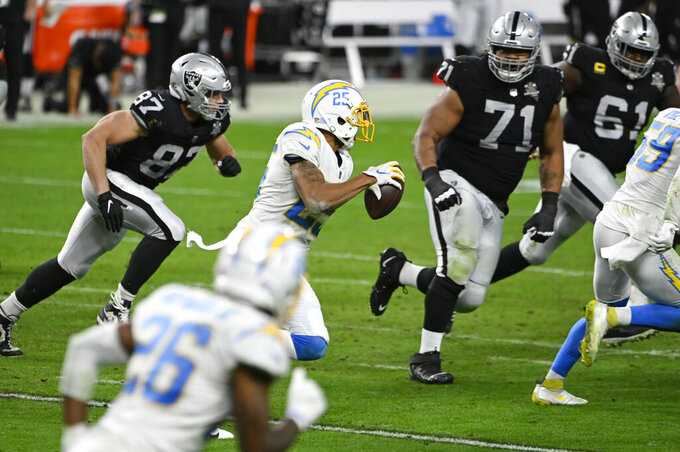 Los Angeles Chargers cornerback Chris Harris (25) runs after making an interception against the Las Vegas Raiders during the second half of an NFL football game, Thursday, Dec. 17, 2020, in Las Vegas. (AP Photo/David Becker)

COSTA MESA, Calif. (AP) — Chris Harris Jr. did everything during his nine seasons playing cornerback for the Denver Broncos, including winning a Super Bowl and being voted an All-Pro.

Everything except play against them.

That will change when Harris, now in his first season with the Los Angeles Chargers, faces the Broncos for the first time Sunday.

“I can’t really describe the feeling, what I’m gonna feel like,” Harris said Wednesday. “Just try to go out there and compete, try to get our team a win over here. It’s gonna be good to see those people over there with the Broncos. There are a lot of great people in the organization, definitely helped out my career and got me to this point where I’m at now, so it’s gonna be definitely great to see those people.”

A foot injury prevented Harris from making his return to Denver in Week 8, when the Chargers (5-9) gave up a touchdown pass with no time remaining to lose 31-30 to the Broncos (5-9). But the delay hasn’t dampened his excitement for seeing so many friends and colleagues again. Harris admitted the chance to stay in the AFC West and play the Broncos every season was a factor in how he chose a new team in free agency.

Harris has remained in touch with Broncos linebacker Von Miller, cornerback A.J. Bouye and left tackle Garett Bolles, among others, since signing a two-year contract with the Chargers in March. Harris and Miller have already spoken this week, but that’s likely to be the only contact before game day, even though Miller has been sidelined all season.

“A lot of those guys are like my little brothers, man,” Harris said. “Like I said, it was a brotherhood over there, and it just happened I had to go to the dark side.”

Despite being limited to seven games because of injury, Harris has quickly formed similar bonds with his new team. Wide receiver Keenan Allen had plenty of respect for Harris as they had faced off nine times as division foes. Getting to see how Harris approaches the game every day has only increased that admiration.

“His knowledge for the game is amazing,” Allen said. “He knows his concepts, he knows his routes, he knows his zones, he knows a lot about the game, and he still has that competitive edge that he had when he was with the Broncos.”

But spirit doesn’t always translate to team success. After reaching the playoffs in each of his first five seasons, each time as division champion, Harris hasn’t been back since, and the Chargers won’t end that drought this season.

However, Harris has been trying to impart a winning mentality to his younger teammates. He sees the 30-27 overtime victory against the Las Vegas Raiders last week, which ended a nine-game losing streak in the division, as a potential turning point.

“Every week you have a new opportunity to show what you can do,” Harris said. “And when you’re winning like that and you’re going through those division titles, things like that, yeah, you want to take advantage of them and you want to embrace those opportunities, embrace the moment. But it was a big step for us last week to break that AFC West kind of curse that we had . . . so that was a good step for us last week to knock off (Las Vegas) and to break that.”

For the Chargers to get consecutive wins in the division for the first time since sweeping the Raiders in 2018, Harris will have to help contain an offense he knows all too well. He sees the turnovers that have hindered Broncos quarterback Drew Lock, but Harris also knows how powerful the passing game can be when wide receivers Jerry Jeudy and Tim Patrick and tight end Noah Fant are rolling.

Harris will also have to manage his emotions given his relationship with the Broncos, something defensive coordinator Gus Bradley recognizes might be more important this week than understanding scheme and tendencies.

“Whenever you do that, whenever a team you’re with for so many years and then you come back and you’re playing ’em, you’d like to say, ‘You know what, we’re focused on what we need to do.’ But there’s times when you, you know, maybe away from the building you think about it and there’s thoughts that come to your mind, maybe just your experiences there,” Bradley said.

Harris wants to treat it like another game, “but I might have a little bit more this week, for sure,” he said.