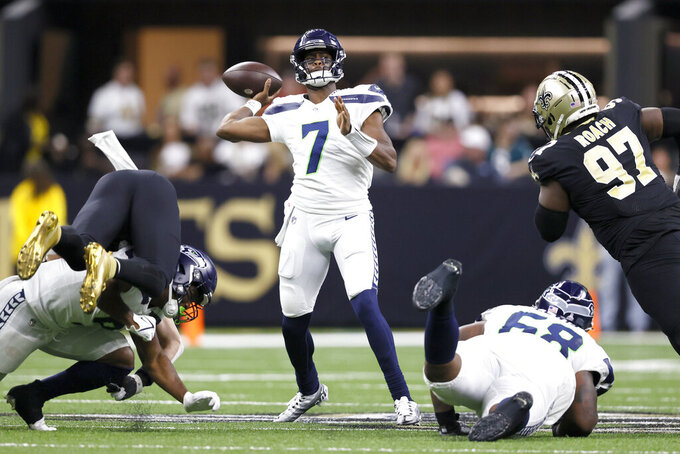 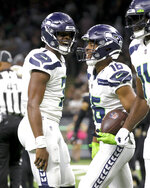 “Look, I just work here and do what they ask,” the 32-year-old Hill said with a grin after one of the most memorable days of his unconventional, six-year, NFL career.

Hill ran for three touchdowns, including a 60-yarder in the fourth quarter, and threw for another score, and New Orleans snapped a three-game skid with a 39-32 victory over the Seattle Seahawks on Sunday.

“My mindset is that, ‘Man, I’m going to take advantage of every opportunity,’" Hill said. "I felt like I was going to get more opportunities this week and so I did my part to make sure I was prepared.”

Hill completed the only pass he’s attempted this season for a 22-yard score to fellow tight end Adam Trautman. His other running TDs went for 8 and 9 yards.

In past seasons, Hill has been a backup and fill-in starter at QB, but also has lined up at a variety of skill positions and played on special teams. This season, he's remained a special teams regular and has had the bulk of his production on offense intermittently lining up under center for designed QB runs — even though he's listed at a tight end.

Against the Seahawks, he rushed for 112 yards on nine carries.

“His performance today, it's hard to match — all the stuff that he can do and all the stuff he was able to do to help us,” said Saints quarterback Andy Dalton, who started his second straight game for the injured Jameis Winston. “He's special.”

Alvin Kamara returned from his rib injury and provided New Orleans (2-3) a boost with 103 yards rushing and 91 yards receiving, highlighted by his 54-yard gain on a screen pass.

“We really wanted to get him going and there's a lot of explosive plays from him,” said Dalton, who completed 16 of 24 passes for 187 yards with one TD pass and one interception.

The game was marked by big plays and dramatic momentum swings. There were six lead changes, five touchdowns that spanned 35 or more yards and even 56-yard field goals by each team.

Geno Smith's exceptional first season as starter for Seattle (2-3) continued, but was not enough to overcome a defense that has allowed at least 27 points four times, including 39 or more twice.

“We had our chances and all kinds of opportunities to get it done and too many things went wrong,” said Seahawks coach Pete Carroll said, who noted his particular displeasure with New Orleans’ 235 yards rushing on a day when the Saints’ passing game was bound to be hampered by the absences of receivers Michael Thomas (foot) and Jarvis Landry (ankle).

”We knew their offense was going to be built around Alvin Kamara and Taysom Hill," Carroll said. "They ran it down our throat and that’s unacceptable.”

Smith passed for 268 yards and three scores, hitting DK Metcalf for a 50-yard TD and Tyler Lockett for touchdowns of 35 and 40 yards.

The Seahawks took a 32-31 lead when Kenneth Walker rushed for a 69-yard TD. But the Saints went back in front for good on Hill's long run shortly after.

“We know that we have a talented roster and we just made some silly mistakes that caused us to lose some football games,” Hill said, lavishing praise on the offensive line. “This was a game where everybody was playing really well and we were doing the right things.”

Hill is just the third NFL player since 1970 to rush for 100 yards and three TDs while also passing for a score in a game, according to ESPN Stats and Information. The others were LaDainian Tomlinson in 2005 and Miami's Ronnie Brown in 2008. Hill also became the first Saints since Archie Manning in 1977 to rush for three TDs and pass for one in a game.

Three touchdowns were set up by fumbles or a turnover on downs.

The first came when Seattle punter Michael Dickson rolled right to make a rugby-style kick, but aborted and was tackled at his own 13, setting up Hill's second TD run.

“We were just changing the launch point. It was something we had been working on in practice for a long time," Carroll said. "It got really cloudy upfield like we don’t expect it to and he felt like he had to duck and he was hesitant to kick the ball.”

Saints: Olave appeared to be briefly knocked unconscious when he his head was slammed into the turf during his TD catch and he did not return. Cornerback Marshon Lattimore had an abdomen injury in the fourth quarter. Return specialist Deonte Harty left with a foot injury.