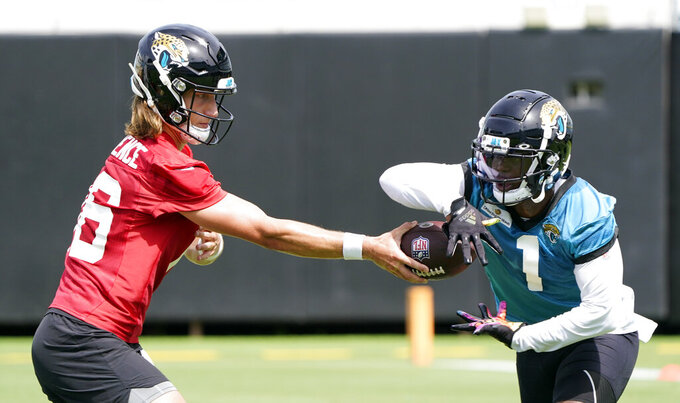 JACKSONVILLE, Fla. (AP) — Travis Etienne had several regrets about having to sit out his rookie season. He longed for the camaraderie, the competition and the chance to play in the NFL, his main goal since he was a kid growing up in Jennings, Louisiana.

There was one bright spot, though.

“If there was any year to miss, I missed a great one,” he said.

Etienne was a spectator for one of the most tumultuous coaching tenures in NFL history, a debacle that once again made the Jacksonville Jaguars a leaguewide laughingstock. He had a front-row seat for most of the shenanigans that got coach Urban Meyer fired after 13 games and countless missteps.

The former Clemson star and the 25th overall pick in the 2021 draft suffered a Lisfranc injury to his left foot in the team’s second preseason game last August and had season-ending surgery. He was “kind of lonely” while rehabbing by himself for much of the season. But the end result made it worthwhile: an earlier-than-expected return.

Etienne opened organized team activities this week full speed, cleared to do anything and everything, and could be a huge addition to an offense in need of more playmakers.

“Everybody’s been anxious for him to get back, including myself,” Lawrence said. “He’s looked great. He adds a lot of versatility for us, really explosive. We’re all pumped to have him back.”

Etienne was one of the most dynamic playmakers in college football history. He led the country with 55 runs of 20 or more yards between 2017 and 2020, rushing for 2,053 yards and 21 touchdowns on those big plays and averaging 37.3 yards a touch.

He became the Atlantic Coast Conference’s all-time leading rusher during his four years at Clemson, leaving school with 4,752 yards on the ground and ranking 28th in NCAA Division I history.

The Jaguars had hoped to use him as a matchup nightmare, a running back who could be effective out of the backfield, in the slot or from a wideout position. His NFL debut ended up getting delayed a year when he hurt his foot at New Orleans.

“It had to be the first 48 hours after surgery,” Etienne said. “I can vividly remember I was in a hotel and I had my foot up on a pillow, and it fell down. Oh my God. That had to be the worst pain ever. It was like, ‘The meds don’t work.’”

He couldn’t do much of anything for six weeks, so immobilized that his mom essentially moved in.

“It definitely was hard mentally. I didn’t realize it then, but I kind of was in a depressed state just not being able to do the things I love to do and just go outside,” he said. “It was just really weird and I really didn’t realize how much it took a toll on me. But having my mom there, she kind of helped me stay in tune with myself and not let me lose myself.”

Etienne is in a much better state of mind these days. Not only does he have a new head coach in Doug Pederson — “I’m excited to see what the future has for us” — he’s running, cutting, jumping and no longer feels the screw still drilled into his footbone.

“I think I will take it out,” he said. “I could leave it there forever. Most guys leave it there, and it never bothers them. But I just don’t want to be 40 years old with a screw in my foot."