Jags waiting to see something incredible from their 'Hulk' 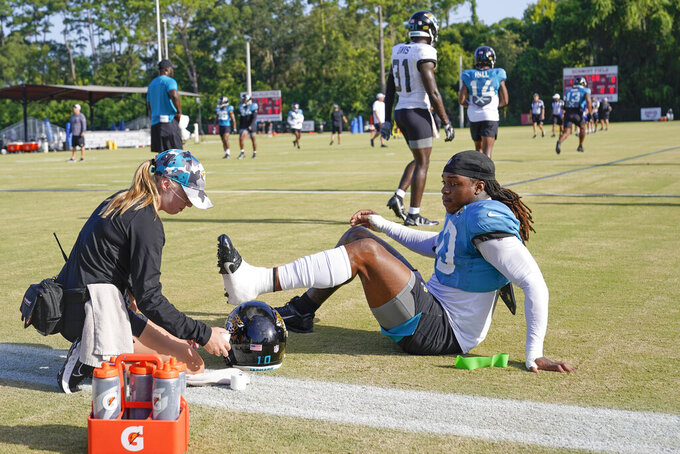 JACKSONVILLE, Fla. (AP) — Jacksonville Jaguars receiver Laviska Shenault is scheduled to make his preseason debut against Pittsburgh on Saturday night. It might also serve as an audition for the rest of league.

That’s because Shenault, a second-round draft pick in 2020, is far from a lock to make the Jaguars’ roster.

Despite catching 121 passes for 1,219 yards and five touchdowns during his first two NFL seasons, the former Colorado standout nicknamed “Hulk Viska” because of his physique is now in a tight position battle that’s essentially down to four guys vying for two spots. Shenault, Jeff Cotton, Tim Jones and Laquon Treadwell have two remaining exhibition games to impress a new coaching staff and state their case to make the team behind starters Christian Kirk, Zay Jones and Marvin Jones.

For Shenault, it’s his third head coach, third offensive coordinator and third receivers coach in as many years.

“In this game of football, excuses are the No. 1 no-no,” Shenault said. “At the same time, it has been a long two years and a lot of different things have happened. But we’re focused on this year. There’s a lot of high hopes, a lot of great things, a lot of great motivation. The vibes are up.”

Shenault’s stock, however, is down.

A hamstring injury slowed him during voluntary workouts in the spring and again early in training camp. And that’s an issue for a specialty receiver whose role has been tweaked to be roughly eight to 10 plays a game following the offseason additions of Kirk, Zay Jones and tight end Evan Engram.

Shenault lacks the speed to be a typical X or Z wideout or to be much of a threat out of the backfield, a la San Francisco’s Deebo Samuel. So the Jags have specific plays for the 6-foot-1, 220-pounder who’s at his best breaking tackles in space.

“The one thing the world knows is that when that ball’s in his hands, he turns into a different guy,” Jaguars receivers coach Chris Jackson said. “You can call that a running back style. To me, it’s just a physical style of play, and he wants that ball in his hands.

That still might not be good enough in Jacksonville, which also has a roster spot reserved for versatile receiver/dynamic kick returner Jamal Agnew and plans to feature second-year running back Travis Etienne in the team’s upgraded passing attack.

But he also led the team in drops with eight and was the subject of trade rumors after Jacksonville spent nearly $60 million guaranteed to land Kirk, Zay Jones and Engram in free agency.

“It’s part of life. It’s part of this game. I’m here to get better,” Shenault said. “I like hearing the bad stuff about me. It makes me work harder. I’m not one of those guys that like can’t see social media or it might affect me. I want to hear it. It makes me better.”

Shenault hired a speed coach in the offseason and tweaked his workout routine to focus less on lifting and more on movement. He has two preseason games – as well as a couple of joint practices in Atlanta next week – to convince the Jaguars he deserves a roster spot.

“Trying to get back to myself,” he said. “It’s a big year. There’s a lot of different things going on, but that’s definitely the way you’ve got to look at it for sure.”