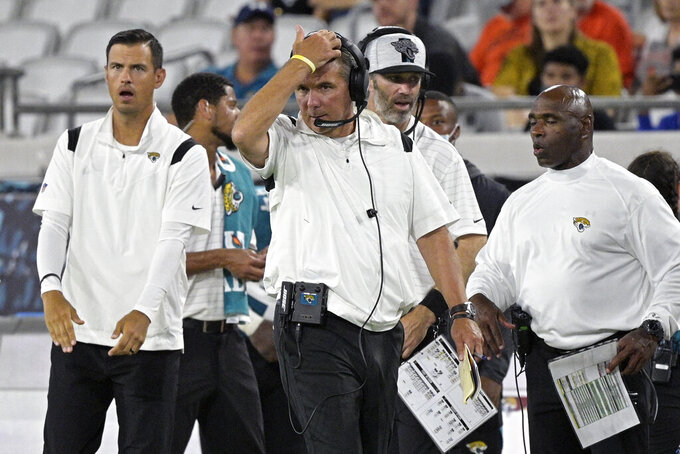 Limited snaps for starters. Significantly fewer plays than in college. Vanilla game plans because veteran assistants don’t want to show too much.

It’s been an adjustment for the longtime college coach who is making the jump to the NFL following another brief retirement.

And it didn’t sit well while Meyer watched his Jaguars struggle in a 23-13 loss to Cleveland in their exhibition opener.

The Jaguars play at New Orleans on Monday night, and Meyer expects more from that side of the ball.

The Jaguars managed 302 yards in a game that opened with Jacksonville’s starters going against Cleveland’s second- and third-team units. Jacksonville had 120 yards and no points at halftime, including just 85 yards from its first-team offense led by rookie quarterback and No. 1 overall draft pick Trevor Lawrence.

The outcome was even more lopsided than the final score considering the Browns failed to convert a fourth-and-6 play from the 6 in the second quarter and gave up a touchdown with 26 seconds remaining.

Offensive coordinator Darrell Bevell acknowledged having “some conversations” with Meyer about potential tweaks this week, but he quickly added “we’ll see what happens in the game, basically.”

“It wasn’t unexpected,” Bevell said. “I kind of felt the game would go a certain way. We were asking the guys to do certain things. I thought they played well in some areas. There’s obviously some things we can do better. The protection of the quarterback is a major emphasis for us.”

Jacksonville certainly doesn’t want to get Lawrence hit or hurt in a somewhat meaningless exhibition. Lawrence admittedly held the ball too long on several throws. He completed 6 of 9 passes for 71 yards in two series. He was sacked twice, including on his first play. He also recovered his own fumble on the 7-yard loss.

“I think the whole game experience for him was a really important part for him to have,” Bevell said. “He’s just had NFL training camp, NFL OTAs, so that was his first opportunity to get in there where actually those guys could tackle it, right? So that really changes the dynamic of it. And so he’ll continue to get better each and every time that he goes out there.”

Although Meyer hasn't proclaimed Lawrence the starter for Monday's game, he said the former Clemson star should play more against the Saints. Coach and quarterback are both still adapting to several subtle changes from college to the pros, including the speed of the game and the reduced number of plays.

“When you’re only talking about 60 plays, three hours of football, that’s a big change for a lot of players and coaches,” Meyer said. “You only get a couple of drives a half. In college, you’re (getting) 80, 90 plays a lot of times, so every play has to count, every drive has to count.”

NOTES: The Jaguars activated S Daniel Thomas from the COVID-19 list and waived CB Luc Barcoo. Thomas had been the player on Jacksonville's COVID list.