Jaguars' Smith questions outrage over decision to step away 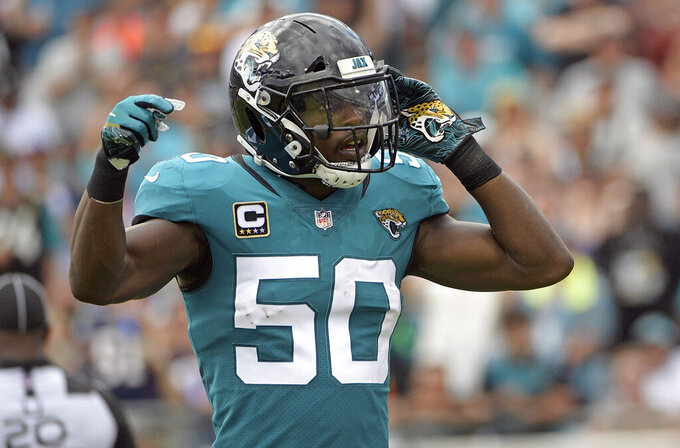 JACKSONVILLE, Fla. (AP) — Jacksonville Jaguars linebacker Telvin Smith wants everyone to "stop going crazy" because he is stepping away from football for the 2019 season.

Smith, the team's leading tackler the last two years, posted a video on his Instagram story Saturday in which he questioned the outrage over his decision.

"Why is it so crazy I want to step away from the game?" Smith said. "Y'all just chill. Everything's solid, you feel me? Stop going crazy. It's getting aggravating. You feel me? Football ain't everything. Y'all better wake the (expletive) up."

It was Smith's first public comments since announcing in a letter Thursday that he is temporarily walking away from the game to "get my world in order."

Smith's decision surprised the Jaguars and caused speculation about his health, his family and his future with the franchise.

The speedy, undersized linebacker has missed just four games in five seasons, including two games during his Pro Bowl season in 2017 because of a concussion. He has 586 tackles, nine interceptions, 7½ sacks and five forced fumbles.

Smith had been skipping voluntary workouts and declined to return calls from coaches and team officials. General manager Dave Caldwell seemed to sense something was amiss with Smith during the NFL draft, saying "we'll see" when asked whether he expected Smith to be on the roster this fall.

The Jaguars have added six linebackers in the past two months, including signing former Green Bay starter Jake Ryan in free agency and drafting Murray State's Quincy Williams in the third round.

Smith signed a four-year, $45 million extension in October 2017 that included $20 million guaranteed. He restructured that deal in March 2018, turning an $8 million roster bonus into a signing bonus, which allowed the team to create extra cap space.

He is due to make $9.75 million this season but would receive nothing if he stays away.