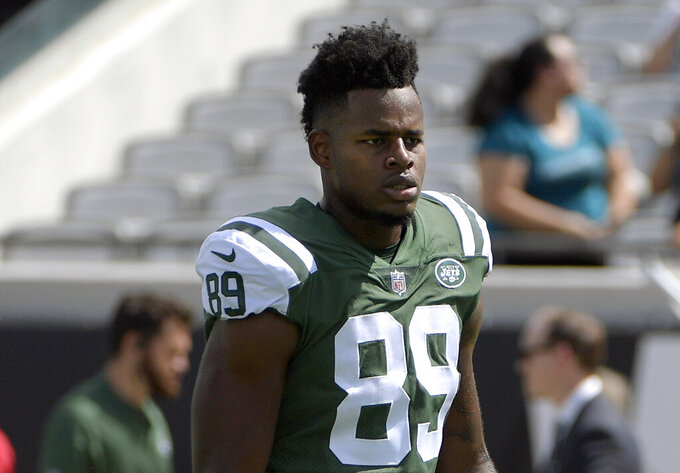 FILE - In this Sept.30, 2018, file photo, New York Jets tight end Chris Herndon warms up before an NFL football game against the Jacksonville Jaguars in Jacksonville, Fla. Herndon has been suspended without pay by the NFL for the first four regular-season games for violating the league's substance abuse policy. Herndon pleaded guilty in January to driving while intoxicated in New Jersey in June 2018. (AP Photo/Phelan M. Ebenhack, File)

Herndon pleaded guilty in January to driving while intoxicated in New Jersey in June 2018. The incident occurred about a month after he was selected by the Jets in the fourth round of the NFL draft out of Miami.

Herndon is eligible to participate in offseason and preseason practices and games. He can return to the Jets' active roster on Oct. 7. Herndon could still appeal the NFL's decision in an attempt to get the suspension reduced.

New Jersey State Police said Herndon was driving his Nissan Armada when he crashed into a Toyota Land Cruiser that was towing a trailer carrying another vehicle. When troopers arrived, they arrested Herndon on suspicion of DWI and took him to a nearby state police barracks for an alcohol breath test. The test revealed a blood-alcohol level over New Jersey's limit of .08, according to State Police Sgt. Lawrence Peele.

Neither Herndon nor the 76-year-old driver was seriously injured. NFL Network reported that a woman who was at the scene later claimed she was injured and that contributed to the suspension being longer than the typical two games for a first-time offender. Commissioner Roger Goodell can dole out additional discipline when determining suspensions if he determines there were aggravating circumstances involved.

A municipal judge in Rockaway Township, New Jersey, suspended Herndon's driver's license for 90 days in January and fined him $639.

The loss of Herndon for four games is a big blow to the Jets, who expect the tight end to be a major part of the offense this season. He finished with 39 receptions for 502 yards and four touchdowns, including catching passes for scores in three straight games.

New York currently also has veterans Eric Tomlinson and Daniel Brown and fourth-round pick Trevon Wesco at tight end, but all three are known mainly for their blocking skills. The Jets could look to add a pass-catching tight end during training camp to fill in for Herndon at the beginning of the regular season.