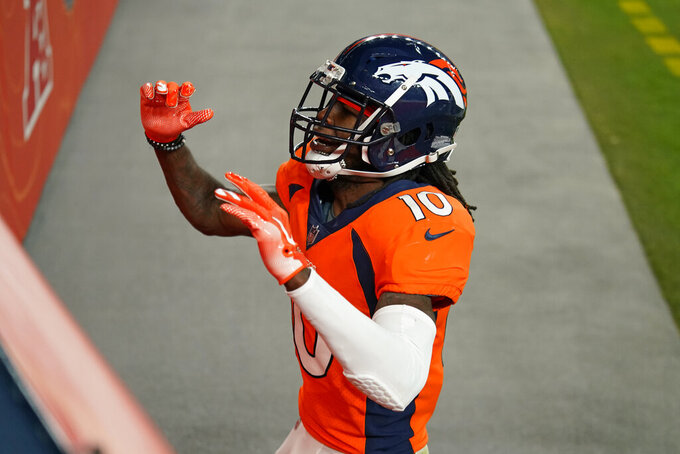 Denver Broncos wide receiver Jerry Jeudy (10) celebrates after scoring a 92-yard touchdown against the Las Vegas Raiders during the second half of an NFL football game, Sunday, Jan. 3, 2021, in Denver. (AP Photo/Jack Dempsey)

ENGLEWOOD, Colo. (AP) — Jerry Jeudy says he’s working on his hand-eye coordination and doing exercises to strengthen his grip ahead of some offseason work with his quarterback so he can cut down on the dropped passes that plagued him his rookie season.

Just who will be throwing those passes to the Broncos wide receiver was the subject of some musing during Jeudy’s media tour for Old Spice.

Denver safety Kareem Jackson, who played with Deshaun Watson in Houston in 2017-18, said in a recent interview with TMZ Sports that he’s had conversations with the Texans’ disgruntled quarterback and that Watson expressed that “Denver is a place that he’s interesting in landing.”

Watson has requested a trade and the Texans say they're not interested in dealing him.

“It would be exciting to have Deshaun Watson there” in Denver, Jeudy told ESPN radio. “You know he’s a great quarterback. He’s had a great career at Houston. We are looking forward to a decision.”

Jeudy also told The Associated Press that Broncos incumbent starter Drew Lock “is a great quarterback” and that he was eager to work with him in the coming months to establish a better rhythm heading into the 2021 season.

Lock’s standing as the Broncos starter has been the subject of speculation in Denver following a so-so second season and the hiring of new general manager George Paton.

Paton, according to the Dan Patrick Show, offered Lock to Detroit along with the ninth overall pick in the NFL draft for QB Matthew Stafford before the Lions dealt Stafford to the Rams for Jared Goff in a blockbuster deal.

Asked about the trade rumors swirling around Lock, who led the league with 18 turnovers last season, Jeudy said on a Zoom interview from Florida, “That’s not in my situation to be handling, but I feel like Drew is a great quarterback.”

“As of right now, I ain’t hear nothing but that he is my quarterback and I’m ready for next season so we can do better and be better than we were last year,” added Jeudy, who partnered with Old Spice to promote the brand’s #ThisOrThatSBLV Challenge on TikTok.

Regarded as the best route runner to come out of college in at least a decade, Jeudy proved his hands weren’t nearly as ready for the NFL.

He had two crucial drops in a season-opening loss to Tennessee and dropped a half dozen passes in a 19-16 loss to the Chargers in Week 16.

Coach Vic Fangio said he hoped that would be a “defining moment” in his career and Jeudy responded with a season-high 140-yard game against the Raiders in Week 17 that included a 92-yard TD that was the longest pass play in the league in 2020.

Catching passes from his quarterback ahead of any offseason program is the next step in Jeudy’s wide receiver rehab and something nobody in the league was allowed to do last year because of the coronavirus pandemic.

“Oh yeah, just getting ready for the offseason, just knowing each other’s tendencies, getting the timing down pat, it’s going to help us a lot during the regular season,” Jeudy said. “The only thing I really need to work on is my hands. I feel I had too many drops that led me to a lot of missed opportunities.”