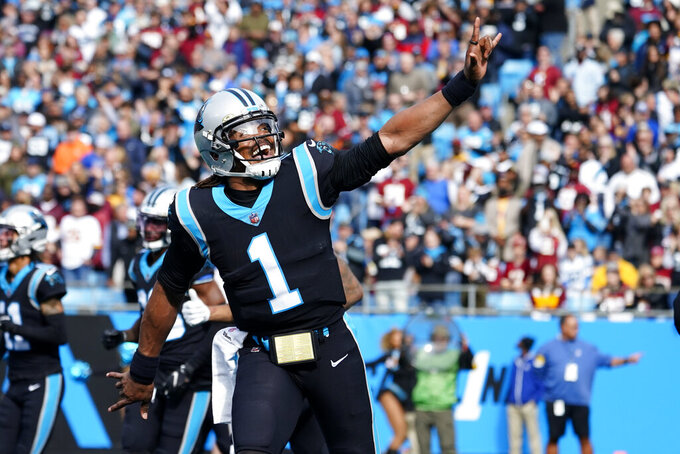 Carolina Panthers quarterback Cam Newton celebrates after a touchdown pass against the Washington Football Team during the first half of an NFL football game Sunday, Nov. 21, 2021, in Charlotte, N.C. (AP Photo/Jacob Kupferman)

The Latest from Week 11 of the NFL (all times EST):

The Arizona Cardinals now have sole possession of the league’s best record.

Colt McCoy stepped in for the injured Kyler Murray and threw for 328 yards and two touchdowns as the Cardinals won 23-13 at Seattle. Arizona’s victory improved the NFC West-leading Cardinals’ record to 9-2.

Murray was missing a third straight game due to an ankle injury.

In other late-afternoon games, the Kansas City Chiefs beat the Dallas Cowboys 19-9 and the Cincinnati Bengals beat the Las Vegas Raiders 32-13.

Arizona shared the league’s best record with the Green Bay Packers and Tennessee Titans at the start of the day. Both the Packers and Titans lost Sunday to fall to 8-3.

Cowboys wide receiver CeeDee Lamb won't return to Dallas' game with the Kansas City Chiefs and is being evaluated for a possible concussion.

Lamb was going up for a pass to the end zone in the closing seconds of the first half that Charvarius Ward ultimately picked off. Lamb was helped by trainers to the locker room at halftime and didn't return to the sideline for the second half.

Earlier in the game, Cowboys running back Zeke Elliott appeared to tweak his right ankle while getting tackled out of bounds. He only missed a handful of plays before returning.

Travis Kelce and Clyde Edwards-Helaire have touchdown runs to give the Kansas City Chiefs a 16-3 halftime lead over the Dallas Cowboys in a matchup of division leaders.

The other late-afternoon games have the Arizona Cardinals leading the Seattle Seahawks 13-6 at halftime and the Cincinnati Bengals leading the Los Angeles Raiders 13-6 in the third quarter.

Three division leaders fell to teams that opened the day with losing records in a surprising round of early-afternoon games.

The NFC North-leading Green Bay Packers lost 34-31 to the second-place Minnesota Vikings on Greg Joseph’s 29-yard field goal as time expired. Jonathan Taylor scored five touchdowns as the Indianapolis Colts rolled to a 41-15 triumph at Buffalo. And the Houston Texans intercepted four Ryan Tannehill passes to win 22-13 on the road against the AFC South-leading Tennessee Titans.

Buffalo’s loss caused the Bills (6-4) to fall out of first place in the AFC East. The Bills now trail the New England Patriots (7-4), who won 25-0 in Atlanta on Thursday.

Quarterback Justin Fields has been ruled out for the rest of the Chicago Bears' game with the Baltimore Ravens.

Fields was seen walking to the tunnel after the first drive of the second half. Bears officials later said the rookie first-round pick from Ohio State had a rib injury.

Andy Dalton has taken over at quarterback for the Bears, who lead the Ravens 7-6.

Arizona Cardinals quarterback Kyler Murray has ben ruled inactive for Sunday’s game against Seattle due to an ankle injury.

It’s the third straight game Murray has missed. Colt McCoy is expected to start despite being questionable with a pectoral injury.

Murray did some light work throwing on the field before the game but was not testing the ankle extensively. The Cardinals have their bye next week before playing at Chicago in Week 13.

Arizona already had ruled out starting wide receiver DeAndre Hopkins due to a hamstring injury.

Starting cornerback D.J. Reed was out for Seattle with groin and knee injuries. Sidney Jones was expected to start in his place. Safety Jamal Adams was active despite being listed as questionable due to a groin injury.

Indianapolis Colts running back Jonathan Taylor has matched an NFL record by scoring a touchdown and gaining at least 100 yards from scrimmage in an eighth consecutive game.

After scoring a career-best three times in the first half against Buffalo, the second-year pro reached 100 yards from scrimmage on the Colts' first drive of the third quarter. He currently has 81 yards rushing and two catches for 19 yards.

The only other NFL players to score a touchdown and gain 100 yards from scrimmage in eight straight games are former Colts running back Lydell Mitchell and LaDainian Tomlinson. Mitchell's streak spanned the 1975-76 seasons. Tomlinson accomplished the feat in 2006.

The Chicago Bears are going with Andy Dalton at quarterback after prized rookie Justin Fields headed toward the locker room with a rib injury in the third quarter against the Baltimore Ravens.

Fields was seen walking to the tunnel after the first drive of the second half. Bears officials say he's questionable to return.

Dalton, who started the first two games before a knee injury in Week 2 against Cincinnati, came in with 8:46 left in the third quarter and quickly threw a 60-yard touchdown to Darnell Mooney on a short pass to give the Bears a 7-6 lead.

Slay intercepted Trevor Siemian’s pass and returned it 51 yards for a touchdown to give Philadelphia a 27-7 lead over the New Orleans Saints late in the second quarter.

Slay has three touchdowns in his last four games. He returned two fumbles for TDs in the previous three games.

The Tennessee Titans have inducted the the two men who oversaw the franchise’s relocation from Houston to Nashville and took the team to its lone Super Bowl into their Ring of Honor.

Controlling owner Amy Adams Strunk honored Jeff Fisher and the late Floyd Reese on Sunday at halftime of the Titans' game against the Texans, the team that replaced the former Oilers in Houston. The late Bum Phillips was inducted into the Ring of Honor earlier this season.

Reese remains the winningest general manager in franchise history with 11 playoff berths in his tenure. He spent 21 years with the team starting as a position coach. He hired Fisher as head coach, drafted 203 AP NFL co-MVP Steve McNair, Eddie George and Jevon Reese. Fisher still is the winningest coach with 147 victories and two AFC championship games. Fisher had only four losing records in 16 full seasons and is the franchise’s only coach to win 13 games in a season. Fisher did that three times.

With heavy rain at Nissan Stadium, the ceremony was held with Fisher and his family and Reese’s family under a tent behind the seats in one end zone on the concourse. After a video played in tribute to both men, Fisher stepped to a microphone and said the penalty on the Titans that ended the first half wasn’t intentional grounding.

The Titans also had approximately 60 former players back for their annual alumni weekend. Kearse was the game’s honorary 12th Titan.

Houston has a 12-0 advantage over Tennessee at halftime. The Texans have lost their last eight games. The Titans have the league’s longest winning streak at six straight.

Tyrod Taylor ran for a touchdown, and Ka’imi Fairbairn has kicked two field goals. Taylor’s TD run was Houston’s first on the road since Sept. 19 in a loss at Cleveland that started this skid.

The Titans tried to drive for points before the end of the first half. But Ryan Tannehill threw the ball away, and officials ruled intentional grounding. That ended the first half with only four seconds remaining.

Cam Newton has thrown for a touchdown and run for a score as he plays at Bank of America Stadium for the first time since returning to the Carolina Panthers.

Newton celebrated a 24-yard touchdown run by racing out to the Panthers logo at midfield and doing his Superman impersonation, pretending to rip open his jersey.

The 32-year-old quarterback helped the Panthers take a 14-7 lead over the Washington Football Team in the second quarter.

It’s the second straight game in which Newton has run and thrown for a touchdown since signing a one-year, $10 million incentive-based contract to rejoin the team that drafted him No. 1 overall in 2011.

Jacksonville Jaguars safety Rayshawn Jenkins has been ejected in the second quarter for throwing a punch against the San Francisco 49ers.

Jenkins and 49ers receiver Jauan Jennings started grabbing and pushing each other after a third-down run that lost yardage. Jennings’ helmet came off on the play, and Jenkins threw a punch that got him immediately disqualified.

It was the second mistake for Jenkins in the game. He was flagged for holding on a third-and-5 play that ended in a sack. The Niners got a new set of downs and went on to kick a field goal to cap a 20-play, 87-yard drive that took a little more than 13 minutes.

Cousins hit Adam Thielen on a third-and-goal pass for a touchdown to cap a 78-yard drive. Forty-seven of those yards came on penalties against the Packers.

All-Pro safety Tyrann Mathieu has been added to the Kansas City Chiefs’ injury report with a knee injury against the Dallas Cowboys and appears unlikely to play Sunday.

The Chiefs added Mathieu to the injury report about three hours before the opening kickoff. He hadn't appeared on the injury list at all this week, indicating that he was a full participant each day in practice.

Mathieu missed Kansas City's season opener after testing positive for COVID-19, but he has started every other game for the AFC West-leading Chiefs. He has 46 tackles along with two interceptions and is crucial in helping to set the defense each play.

If he’s unable to play Sunday, the Chiefs would turn to Daniel Sorensen and Armani Watts alongside Juan Thornhill.

Indianapolis Colts running back Jonathan Taylor has scored on a 3-yard run to extend his touchdown streak to eight games.

It’s the NFL’s longest active streak and ranks as the third-longest in team history, one behind Lydell Mitchell, who enjoyed a nine-game run spanning the 1975-76 seasons. The Colts’ record for most games with a TD rushing is 11, set by Lenny Moore spanning the 1963-64 seasons.

Taylor has 35 yards rushing already. He's in position to extend his streak of games with a touchdown and 100 yards from scrimmage to eight, which would tie the NFL record held by Mitchell and LaDainian Tomlinson.

Indianapolis' Jonathan Taylor has taken over the NFL yards rushing lead by gaining 3 yards on his opening carry in the Colts' game against the Buffalo Bills.

The Green Bay Packers will be without several key players for their game Sunday at Minnesota.

Quarterback Aaron Rodgers is in the lineup, but he’s playing with a toe injury. Running back Aaron Jones (knee) and outside linebacker Rashan Gary (elbow) are both out, leaving the Packers without their leading rusher and top pass rusher.

Left tackle David Bakhtiari (knee) has yet to be cleared to return. Wide receivers Allen Lazard (shoulder) and Malik Taylor (abdomen) are also inactive for this game against the Vikings. Taylor also is Green Bay's kick returner.

The Vikings have safety Harrison Smith and center Garrett Bradbury back from a two-game absence due to COVID-19. Bradbury, however, didn't get his job back. Mason Cole gets another start at center.

Vikings cornerback Patrick Peterson is also active missing three games to a hamstring injury. Linebacker Anthony Barr is back on the field after sitting out last week with a knee injury.

The Vikings do have two key players out for the season: defensive end Danielle Hunter and tight end Irv Smith Jr. Defensive tackle Michael Pierce remains out with an elbow injury, missing his sixth straight game.

Baltimore Ravens quarterback Lamar Jackson won’t be playing Sunday against the Chicago Bears due to an illness.

He’s not the only quarterback who’s been declared inactive for the early games. Detroit’s Jared Goff won’t play against the Cleveland Browns as he deals with an oblique injury.

Jackson’s illness apparently means that Tyler Huntley will start for the Ravens against Chicago. Tim Boyle will make his first NFL start for the Lions with Goff out.

Goff got hurt last week in a tie against the Pittsburgh Steelers and didn’t practice this week. His status remains uncertain for Thursday’s Thanksgiving game against Chicago.

The 27-year-old Boyle spent the previous three seasons as Green Bay’s No. 2 quarterback behind Aaron Rodgers. He had a solid training camp with Detroit but broke his thumb, underwent surgery and was on injured reserve until Friday.