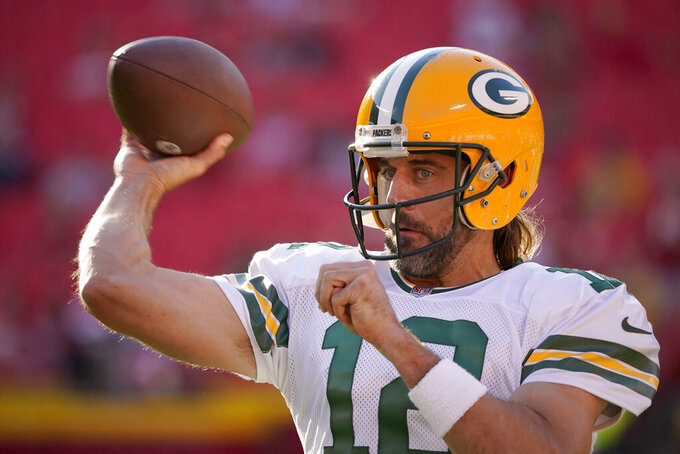 FILE - Green Bay Packers quarterback Aaron Rodgers warms up before the start of an NFL preseason football game between the Kansas City Chiefs and the Green Bay Packers, Thursday, Aug. 25, 2022, in Kansas City, Mo. The Packers’ chances of continuing that uncanny level of success will depend on how fast reigning MVP quarterback Aaron Rodgers develops chemistry with his new group of receivers. (AP Photo/Ed Zurga, File)

GREEN BAY, Wis. (AP) — Davante Adams might not be the only notable receiver missing when the Green Bay Packers open their season.

Allen Lazard hasn’t practiced this week due to an ankle injury, leaving his status uncertain for Sunday’s game at Minnesota. That means the Packers and MVP quarterback Aaron Rodgers could be without their top returning receiver as they adapt to life without Adams, the two-time All-Pro who was traded to the Las Vegas Raiders in March.

“He got stepped on last week, so that’s where we’re at with him,” Packers coach Matt LaFleur said Wednesday.

Veterans Randall Cobb, Sammy Watkins and Amari Rodgers and rookies Christian Watson, Romeo Doubs and Samori Toure are the other receivers on Green Bay’s roster. The Packers also have Juwann Winfree and Travis Fulgham on the practice squad.

None of them caught more than 28 passes last season.

“I don’t think (Lazard) needs a lot of practice to be ready to go, so we’ll see how the week progresses,” Aaron Rodgers said.

With or without Lazard, the progress of Green Bay’s passing game figured to be a major story early in the season because of Adams’ absence.

Then again, the Packers have thrived in these circumstances before.

The Packers won each of the seven games Adams missed because of injury over the past three seasons as Rodgers consistently found ways to adjust, whether throwing three touchdown passes to tight end Robert Tonyan in a victory over Atlanta in 2020 or finding Cobb in the end zone twice in a triumph at Arizona last season.

Rodgers also has a history of success against the Vikings, though Adams played a major role in many of those wins. Rodgers has thrown 13 touchdown passes and no interceptions in his past four matchups with the Vikings. Eight of those touchdowns went to Adams.

Green Bay’s receivers believe they can produce even if they’re not at full strength Sunday.

“Our confidence is still high,” said Doubs, a fourth-round pick from Nevada. “Allen Lazard, regardless of if he plays or not, he’ll still push us the same way as he would if he was playing. We all understand it’s just a next-man-up mentality.”

Complicating matters is the uncertainty surrounding Green Bay’s offensive line with David Bakhtiari and Elgton Jenkins recovering from knee injuries. They were limited in practice Wednesday and would be the Packers’ starting tackles if healthy.

“There’s going to be young guys suited up, for sure, whether or not those guys play,” Rodgers said of the offensive line. “And we don’t have like that swing veteran tackle that we’ve had in years past or older veteran, a Lucas Patrick-type guy, so expecting those young guys to be ready to go if their number gets called.”

Patrick signed with the Chicago Bears after starting 28 games for the Packers over the past two seasons.

But the biggest issue on offense is how the young receivers will respond.

The rookies’ biggest test comes Sunday as they open their careers with a division game on the road. They got at least a taste of what to expect last week when the Packers conducted a practice with conditions as close as possible to actual game situations.

“Obviously it’s a little different,” Rodgers said. “The speed is amped up. They felt the other day, I think, what me in a game-like situation is like — my energy, the expectation, the tempo with which we play at.

“Look, they know what the expectations are. We’re not going to put them in positions to not be successful, but there’s going to be opportunities for them when they get out there to make plays, and I’m confident they’re going to make the plays that are available.”