Lefty QB Tua Tagovailoa a rarity in the right-handed NFL 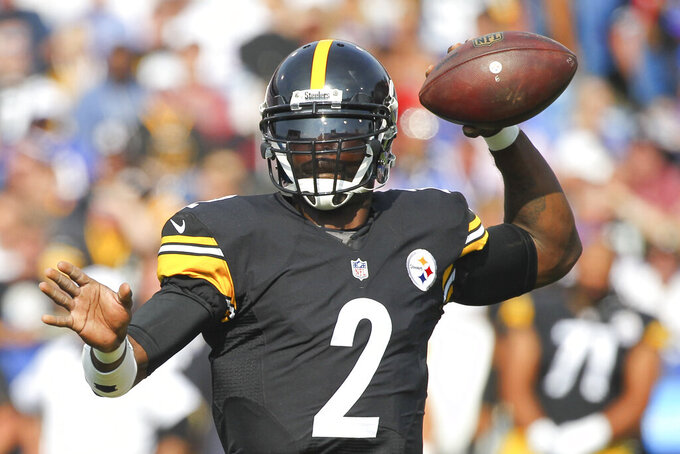 FILE - In this Aug. 29, 2015, file photo, Pittsburgh Steelers quarterback Michael Vick (2) passes against the Buffalo Bills during the first half of a preseason NFL football game in Orchard Park, N.Y. There's been fewer than three dozen left-handed QBs in the league's 100-year history, and of the 116 quarterbacks who threw a pass in the NFL over the last four seasons, every single one of them was right-handed.(AP Photo/Bill Wippert, File)

When Tua Tagovailoa signed his rookie contract with the Miami Dolphins, the left-handed quarterback from Alabama didn’t have to worry about smudging his signature.

He signed the documents with his right hand.

Yes, the NFL’s latest lefty QB is a natural right-hander, one whose father, Galu, turned him into a (sometimes) southpaw in his youth.

“My dad was the only lefty in our family and he wanted me to be a lefty as well, so he switched the way I threw,” explained Tagovailoa, who still eats, writes and golfs right-handed but shoots baskets and throws footballs with his left.

“I don’t think I would be here if I was a righty,” said Tagovailoa. “Because I know I’m only good with my left hand throwing the ball.”

That makes Tagovailoa an oddity in the NFL, where a left-hander hasn’t started at quarterback since 2015, when Dallas’ Kellen Moore threw for 435 yards in a Week 17 loss to Washington.

Since then, 116 quarterbacks have thrown a pass in the NFL, and all of them were right-handed.

The last lefty to throw a TD pass wasn’t even a quarterback but a wide receiver: the Cowboys' Dez Bryant threw a 25-yard strike to Jason Witten in 2016 against Detroit.

Fewer than three dozen southpaws have played quarterback in the NFL’s 100-year history, something that irks Steve Young, the most decorated left-handed QB and the first to reach the Hall of Fame, 11 years before Ken Stabler’s posthumous induction in 2016.

“There’s something wrong from a statistical standpoint,” Young said, noting that with 10% of the general population being left-handed, every year there should be a half-dozen lefties among the league’s 64 or so quarterbacks.

“And we’ve never been 10%,” Young said. “I can never remember six of us at one time. It was Boomer Esiason, myself, Mark Brunell, Jim Zorn early on. I can think of four or five, never six at one time, ever. Later on, Michael Vick.”

Now, lefties are lucky there’s even one of them.

“I will never say a kid is left-handed so he can’t play in the National Football League,” Steelers GM Colbert said. “That would be a naive statement. That would never concern us whatsoever.”

Added 49ers coach Kyle Shanahan: “A good thrower is a good thrower. I would say it’s probably a coincidence, probably less pool to choose from.”

The bias certainly doesn’t begin in the pros.

Even the experts are stumped over what's caused this paucity of southpaws.

“I usually have an answer or can dance around a lot of things,” Vikings GM Rick Spielman acknowledged. “That one, I have no answer to.”

“I don’t have an answer,” either, added Broncos GM John Elway, who did offer a guess: he wonders if all the good lefty QBs are becoming pitchers instead.

“Those lefties that can throw heat are pretty coveted,” said Elway, himself a minor league farmhand (as a right-handed outfielder) in the Yankees system the summer before beginning his Hall of Fame NFL career.

“If I could be a left-handed pitcher and throw in the 90s and play major league baseball, that’s a pretty good gig,” Jaguars coach Doug Marrone said. “I don’t have anyone 300 pounds running at me trying to take me down.”

“I could never have been a major league pitcher, I couldn’t have even been a college pitcher. But I could play quarterback,” Young said. “A small percentage of quarterbacks can pitch in the major leagues. Or even pitch in college. Quarterbacking and pitching don’t necessarily go hand in hand.

“So, the only thing I can go with is that coaches don’t want to coach lefties.”

He was an incoming freshman at Brigham Young in 1981 when the Cougars’ offensive coordinator, Doug Scovil, pulled him aside and told him bluntly that he didn’t coach left-handed quarterbacks, so he’d better move to safety.

Scovil soon left, however, to become the head coach at San Diego State.

“Luckily, or I was done,” Young said. “I was cooked. I was playing defensive back with Tom Holmoe.”

Not long after Scovil left, QBs coach Ted Tollner spotted Young throwing beautiful spirals at practice and asked him why he wasn’t under center.

So, Young went back to throwing passes, not defending them, “and nobody else ever said a word about me being a lefty.”

He’s certain, however, that kids are still told if they’re left-handed they can’t play quarterback.

“No one would admit it, but I think there must be enough people who don’t want to coach them,” Young said.

Sure, the ball spins and tails in the opposite direction out of a lefty's hand, but so what?

“It was kind of weird at first,” said Broncos rookie receiver Jerry Jeudy, who played with Tagovailoa at Alabama. “After three catches or so, you get used to it real fast.”

Being such a scarcity, lefty QBs actually have an advantage because opponents aren’t accustomed to facing offenses that have had to flip the playbook on its vertical axis, Young suggested.

“Our teams in San Francisco were always ‘left-handed’ because I was left-handed,” Young said. “And I think there’s a slight advantage because no one else shows up with a left-handed quarterback and such comfort coming out left, rolling left, left-to-right formations. And so for a defense, it was just different.”

Recently, teams haven't needed have to change the makeup of their offensive line to accommodate a lefty, either. With so many elite edge rushers, right tackles have become just as valued as left tackles, the traditional blindside protectors.

“You’ve got to have two elite tackles anyway,” Brunell said.

That’s one more reason Young insists it’s foolhardy to consider lefties a liability — at any level.

And he’s eager to watch Tagovailoa go out and prove that.