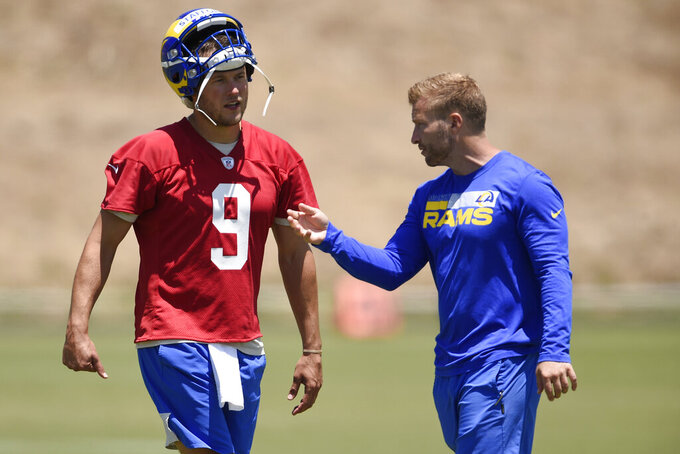 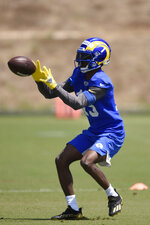 “I about froze up,” Jones recalled Wednesday with a laugh. “I was like, ‘Bro, this is Aaron Donald!’”

It's still early in the Rams' offseason program, but Jones hasn't yet had a conversation with his famous new teammate. Los Angeles drafted Jones to be a key component in a defense that finished No. 1 in the NFL last season, so he's been busy learning the playbook and adjusting to his new responsibilities.

Eventually he'll work up the nerve to talk to Donald, too.

“I didn't want to fanboy him at first, so I've kind of tried to stand back from AD,” Jones said. “But it's coming. I want a one-on-one, full conversation with him.”

Donald and the Rams would love to be talking about solid contributions from their modest rookie class this fall after another offseason in which they lost more veteran talent than they added. And though Los Angeles didn't make a first-round pick for the fifth consecutive year, its top two choices could have significant responsibilities.

Jones is a candidate to play in the middle of the Rams' defense from the start after holding a similar role at South Carolina, where he impressed the Rams' coaches with his leadership and tenacity.

Los Angeles has lacked a consistently healthy, high-volume tackler in the middle of their 3-4 defenses in recent seasons, and Jones fit the Rams' profile for the job so well that they surprisingly used a third-round pick on him.

With their top pick in the second round, the Rams also raised eyebrows by drafting Tutu Atwell, the speedy Louisville receiver whose modest size scared off some suitors. Although Los Angeles had signed DeSean Jackson just five weeks earlier, coach Sean McVay said the Rams wanted another fast wideout who will force defenses to respect quarterback Matthew Stafford's ability to throw deep.

Atwell has already impressed fellow receiver Robert Woods and other teammates with his confident swagger on the practice field — “It's a Miami thing,” Atwell said, mentioning his hometown with a grin.

And while he will have to work for playing time at a position already featuring Jackson, Woods, Cooper Kupp and Van Jefferson, Atwell is hoping to contribute right away as a punt returner.

“I'm excited to play on the (offense) and in a special teams role,” Atwell said. “Punt returning would be a big deal for me. It would actually help me. It would be a great spot for the team. I'm just excited and ready to take over the job and do what I have to do. ... It will be a nice (opportunity) for me to just get back there and do what I do best."

Nsimba Webster returned punts with middling success for the Rams last season, and Kupp occasionally helped out. Webster and Kupp were back with Atwell catching punts together during the special teams portion of the Rams' practice Thursday, and McVay said he won't choose his first-string returner until much closer to the season.

McVay also wants Atwell to concentrate on the offensive aspects of his job. Although the Rams “are loaded at the receiver position,” as Woods said earlier this week, Atwell could play a significant role for the offense, particularly if the 34-year-old Jackson struggles to stay healthy again.

“He's come out here and he's done a good job trying to pick things up,” McVay said of Atwell. “There's a lot of information that we've thrown at him in a short amount of time, but you can definitely feel that speed. We've got a lot of guys that are potential candidates to be punt returners for us, and we've got a long time to figure that out, but I've been pleased with Tutu so far.”

NOTES: McVay said the Rams will hold training camp at UC Irvine again this year with fans in attendance. Rookies report on July 25, and veterans will start July 27. ... Los Angeles will hold joint practices during the preseason with the Las Vegas Raiders and the Dallas Cowboys. ... The Rams have signed former Titans CB Kareem Orr, who spent the past two seasons contributing sparingly for Tennessee. ... Players who didn't participate in Thursday's voluntary practice included Jackson and Donald, but McVay said he is pleased with the attendance at the offseason workouts.