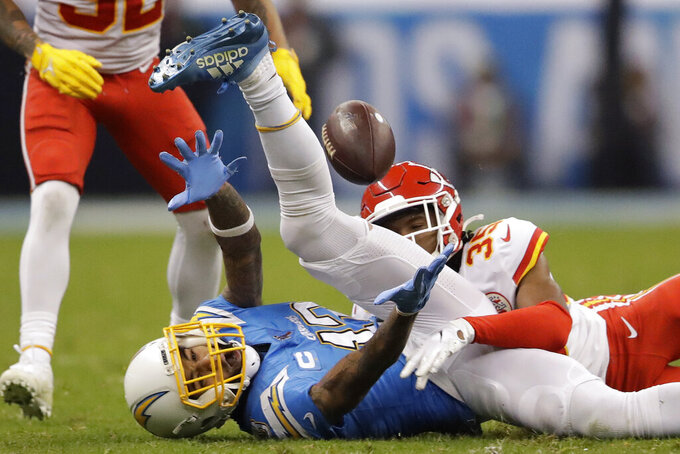 MEXICO CITY (AP) — Nearly everything about this Monday night game felt foreign to Patrick Mahomes and the Kansas City Chiefs, from the gasp-inducing altitude of raucous Azteca Stadium to the struggles of their powerhouse offense.

Mahomes loved the experience, but didn’t love how his offense played. The Chiefs’ defense picked it up time and again, culminating in the final pick that sent them all back home as winners.

“We kept that confidence all game long,” Mahomes said. “We knew that someone was going to make a play to win the game.”

Daniel Sorensen snared Philip Rivers’ fourth interception at the goal line with 18 seconds to play, and the Chiefs stayed on top of the AFC West with a 24-17 victory over the Los Angeles Chargers.

Mahomes passed for 182 yards and hit Travis Kelce for his only touchdown, while LeSean McCoy and Darrel Williams rushed for touchdowns as the Chiefs (7-4) hung on to win the fourth regular-season NFL game played in Mexico despite being held to 310 yards of offense. They also survived a few problems with Azteca’s grass field and a one-sided first half favoring the Chargers (4-7), who racked up 312 yards without a touchdown.

After throwing his second interception of the season in the first half, Mahomes led two sharp scoring drives in the third quarter with help from Kelce, who caught seven passes for 92 yards. Mahomes also led the Chiefs with 59 yards rushing while his defense — which had only six interceptions all season coming into Mexico City — held Los Angeles to eight points in the second half.

But the win still wasn’t assured until Sorensen grabbed Rivers’ underthrown pass to Austin Ekeler at the goal line to secure the Chiefs’ 10th win over Los Angeles in 11 meetings.

“I was real proud of our defense for the job that they did,” Chiefs coach Andy Reid said. “Four takeaways, so for the guys that intercepted the football and then helped create the turnovers, I'm proud of those guys.”

Rivers passed for 353 yards during his first four-interception game since November 2016 for the Chargers, whose playoff hopes are nearly dead after five losses in seven games. Keenan Allen caught his first TD pass since Week 3 in the third quarter, but the Chargers had three inept drives in the scoreless fourth quarter.

On the Bolts’ last gasp, Mike Williams made a spectacular 50-yard catch with 44 seconds to play. Los Angeles reached the Kansas City 14 before Rivers’ final mistake.

“He went out and he gave it his all,” Chargers coach Anthony Lynn said of Rivers. “He made some mistakes, and he understands that. But I thought he did some good things and put us in positions where we did move the ball down the field.”

Rivers, who turns 38 next month, has thrown seven interceptions in the Chargers’ last two games, giving him 14 this season — more than every quarterback in the NFL except Jameis Winston.

“It's a football game,” Rivers said. “If you could just pick and choose and never throw them ever, I would choose to throw zero. But it's hurting us right now. I just need to cut them out.”

One year after the NFL called off a game at Azteca Stadium on short notice because of poor field conditions, these teams played an entertaining game in the 7,200-foot elevation and on the Azteca grass, which yielded several significant divots from sharp stops or changes of direction.

The Rams and Chiefs were scheduled to play here last season, but severe damage to the turf field compelled the NFL to relocate the game to Los Angeles on six days’ notice.

Azteca removed its hybrid turf and installed natural grass this year, and the field had been untouched since Club América’s last home soccer game Nov. 2. The grounds crew came onto the field at halftime and during timeouts in the second half to attend to the worst spots.

The NFL and the stadium still threw an impressive party for 76,252 of Mexico’s football-loving fans, who packed the arena and mostly supported the Chargers, the nominal home team.

Although the teams spent less than 48 hours in Mexico’s capital city, the NFL has deep roots among fans around the country. Commissioner Roger Goodell met Monday with Mexican President Andrés Manuel López Obrador while the league and the federal government are considering extending the Mexico game series beyond its current deal through 2021.

Tyreek Hill left the field with a right hamstring injury after the Chiefs’ second offensive series, although it didn’t appear to be caused by the turf. The speedster watched the second half from the sideline.

Tyrann Mathieu’s 35-yard interception return set up McCoy’s 6-yard TD run for the game’s first touchdown in the second quarter. After Williams scored on the Chiefs’ opening drive of the second half, Mahomes hit Kelce with a picture-perfect 23-yard TD throw on the next drive.

Rivers and Allen answered with a TD connection late in the third quarter and a 2-point conversion. The two-time Pro Bowl receiver improbably hadn’t caught a TD pass since Week 3.

Chiefs: Along with Hill, RB Damien Williams was lost to a rib injury and safety Jordan Lucas went out with a shoulder injury. ... Center Austin Reiter was evaluated for a concussion but returned.

Chargers: LT Russell Okung missed his second straight game with a groin injury. ... Allen went down hard on the final play of a drive in the second quarter but returned.

Chiefs: A bye week followed by an important visit from the Oakland Raiders on Sunday, Dec. 1.

Chargers: After a bye week, a trip to face the Denver Broncos on Sunday, Dec. 1.

By Julie Watson 29 minutes ago
By Stephen Whyno 3 hrs ago
By Dennis Waszak Jr. 18 hrs ago
By Tom Withers 19 hrs ago
By Kristie Rieken 23 hrs ago