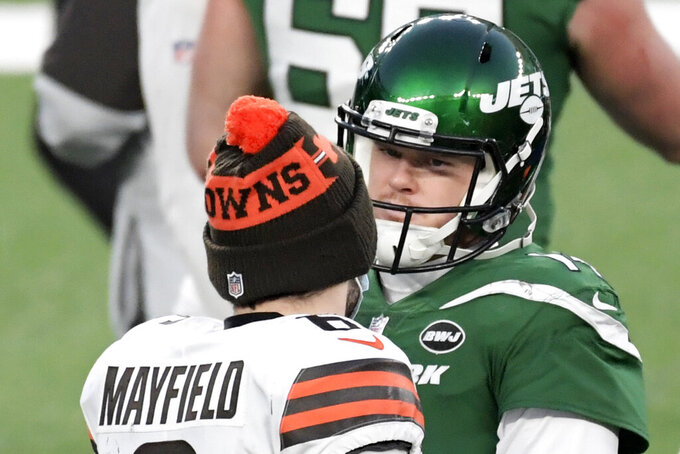 FILE - New York Jets quarterback Sam Darnold talks with Cleveland Browns quarterback Baker Mayfield (6) after the Jets defeated the Browns 23-16 in an NFL football game Sunday, Dec. 27, 2020, in East Rutherford, N.J. The Carolina Panthers now have two of the top three overall picks from the 2018 NFL draft on their roster. The big question is which one of them will start for them this season at quarterback. (AP Photo/Bill Kostroun, File)

LAST YEAR: The Panthers endured their second straight five-win season under coach Matt Rhule, leaving him on the hot seat as he enters his third season. Simply put, this is a must-win season for Rhule. Carolina again struggled with poor offensive line play and the inability to find stability at the quarterback position in 2021 as the offense ranked near the bottom of the league, prompting the Panthers to hire coordinator Ben McAdoo. Carolina started the offseason attempting to acquire QB Deshaun Watson. But after losing out to Cleveland in the QB sweepstakes, the Panthers traded for former Browns signal-caller Baker Mayfield. The No. 1 overall draft pick in 2018 will compete for a starting spot with Sam Darnold once the team arrives at training camp.

CAMP NEEDS: General manager Scott Fitterer said the Panthers will continue to look to upgrade the roster, looking at defensive tackle and defensive end as the biggest needs. Carolina needs to replace Reddick's double-digits sacks and impactful plays — and that won't be easy. The defense is still young and talented but the offense needs to take a big step forward.

KEY CAMP COMPETITIONS: Aside from figuring out who'll be the team's starting quarterback, the Panthers have to settle on a starting five on the offensive line. The assumption has been that first-round pick Ikem Ekwonu will step in and start right away at left tackle, but the team remains high on second-year player Brady Christensen. Christensen does have the ability to move inside and play guard, which seems the more likely scenario. One potential breakout player is second-year wide receiver Terrace Marshall Jr.

EXPECTATIONS: The Panthers aren't predicted to do much, but if Mayfield is able to play mistake-free football, they will have a chance to compete in the NFC South. Carolina has some valuable playmakers in wide receiver D.J. Moore and Robbie Anderson, as well as 2019 All-Pro running back Christian McCaffrey. McCaffrey has struggled with injuries the past two seasons but when healthy is one of the most dominant players in the league.