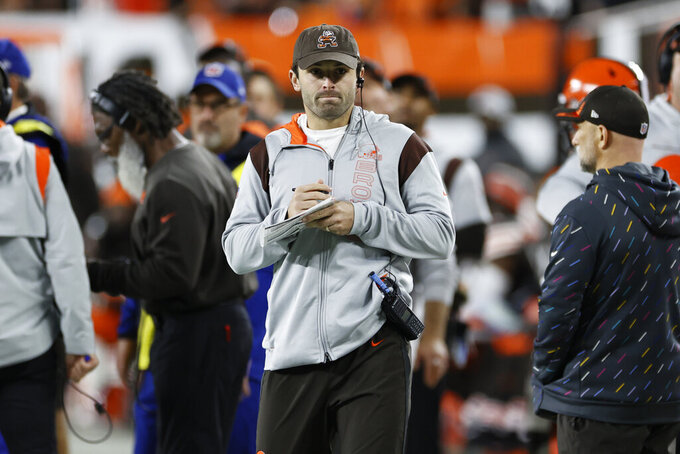 BEREA, Ohio (AP) — Baker Mayfield isn't healthy enough to practice, and he may not be much closer to playing either.

The Browns' quarterback sat out Monday's workout because of a troubling shoulder injury and there are early signs pointing to Mayfield missing this week's home game against the rival Pittsburgh Steelers.

Mayfield's dealing with a torn labrum and fracture in his non-throwing shoulder and was inactive Thursday night, when the Browns started backup QB Case Keenum and beat the Denver Broncos.

Browns coach Kevin Stefanski didn't provide much of an update on Mayfield's condition or status other than to say "he's feeling better” after sitting Thursday and following a long weekend to rest.

Stefanski would not comment on if the Browns are considering a move to injured reserve for Mayfield. If he's placed on IR, Mayfield would have to miss at least three games.

Stefanski has not yet ruled out Mayfield for the Steelers (3-3), who are coming off their bye week. He added that facing Pittsburgh and its solid defense, led by star linebacker and sack specialist T.J. Watt, will have no bearing on whether Mayfield plays.

"We will just defer to the medical staff,” Stefanski said.

Last week, an MRI revealed the fracture in Mayfield's humerus bone — the long bone that runs from the shoulder to the elbow — raising questions about whether he should be playing with the risk of doing more damage.

The 26-year-old had already been dealing with the labrum tear and fraying, which has caused severe pain and swelling and forced him wear a stabilizing harness. Mayfield will almost certainly have offseason surgery to address the injury.

Mayfield had insisted last week he wouldn't miss any games, but a lack of mobility in his arm convinced him to end his streak of 53 consecutive starts.

With the shortened week, there wasn’t time for Mayfield to get ready for the Broncos. Now the Browns may take a cautious approach and have him sit again to see if added treatment and rest will make things better.

Stefanski sidestepped a question about whether another week off would benefit Mayfield.

“I would probably be speaking out of turn if I spoke to that," Stefanski said. "That is really a medical type of thing. I would just tell you, I am listening to all of the people that have the degrees, and we will go with what they tell us.”

Stefanski wasn't sure if he would know by Wednesday's practice whether Mayfield can return.

“We'll see,” he said. "It's hard to say how it's going to play out. I'm not in the prediction business. There are a lot of things I want. We just have to work through all of it, and the quarterback position really is no different than any of these other positions where guys’ availability you might not know Wednesday — and you might not know Friday.”

Keenum, who hadn't started since 2019 for Washington before he was called upon last week, threw a touchdown pass and ran for a critical first down in the Browns' 17-14 win over the Broncos. He completed 21 of 33 passes for 199 yards and a 90.3 passer rating.

The Browns (4-3) have confidence Keenum can lead them until Mayfield's ready.

“We didn’t feel any drop-off,” said left tackle Jedrick Wills Jr. “Case is a veteran guy. He’s probably played in more games than I have my whole career. So there’s no drop-off. Everything felt very smooth, ran the offense smooth.”

The Browns did get some positive news as running back Nick Chubb practiced for the first time since missing his second straight game with a calf injury. Starting right tackle Jack Conklin also returned from a knee injury that kept him out two games.

“He's feeling good. He's continuing to get rehab,” Stefanski said. "I think he's excited to get back out there. We will see how it goes over the next couple days and see if he can.”

NOTES: CB Denzel Ward (hamstring), DE Jadeveon Clowney (ankle/chest/knee) and WR Donovan Peoples-Jones (groin) rode stationary bikes and worked to the side as the Browns practiced indoors because of rain.