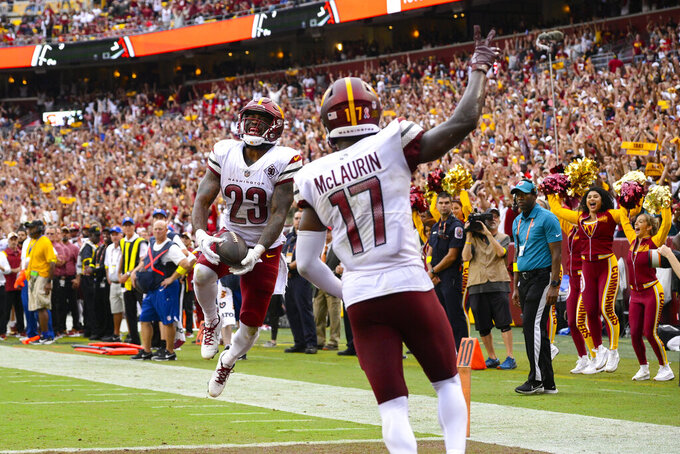 ASHBURN, Va. (AP) — Acquiring quarterback Carson Wentz was just one part of the Washington Commanders' plan to open up the offense.

Drafting Jahan Dotson in the first round, along with getting receiver Curtis Samuel and Logan Thomas back from injuries, is expected to give Wentz plenty of options to work with. Wentz completing TD passes to Dotson, Samuel and recently extended top wideout Terry McLaurin in a season-opening victory against Jacksonville showed the best of what this offense could be. The Detroit Lions are up next in Week 2.

“We’re very versatile, and I think that’s what makes us have the ability to do some really good things,” Wentz said after his four-touchdown, two-interception performance. "(The game) showed a little bit of who we are and what we can do: running the ball, spreading teams out, underneath taking shots and hopefully we can keep getting better at it.”

Five different players had at least one carry, and seven caught a pass from Wentz, who also targeted three others in spreading the ball around. This is how it was supposed to be last year before Samuel's groin injury derailed his season, and it's exactly what coach Ron Rivera and offensive coordinator Scott Turner envisioned.

“If we can spread it and keep it spread, it spreads the defense and then we’ll see some plays happen,” Rivera said Monday. “We’ll be able to use the underneath passing game. We can throw it over the top. Those are the things that happen when you can spread the ball and they just don’t focus in on one guy.”

If there's one guy to focus on, it's McLaurin, and the Jaguars limited him to one catch for 9 yards before Wentz connected with him on a 49-yard touchdown. The presence of Samuel outside, Dotson in the slot and tight ends like Thomas and rookie Armani Rodgers makes it difficult on opponents.

“We just got a lot of talent,” Thomas said. "Sometimes you can just double a guy and completely take him off, and if you do that, you’re allowing three other guys, four other guys to be able to run down the field, too, and cover. That’s tough. That’s tough on any defense.”

Rivera is happy with Turner and defensive coordinator Jack Del Rio and how they handled some adversity.

“The biggest thing I said more so than anything else was sticking to the game plan, sticking to what we had worked on and practiced," Rivera said. “Not trying to force anything to happen.”

The run defense needs some adjustments after the Jaguars averaged 6.8 yards a carry, and it could've been worse if they didn't lean so heavily toward the pass. The Lions rushed for 181 yards in their season-opening loss to Philadelphia.

“You just want to be more consistent," Commanders defensive tackle Jonathan Allen said. “It wasn’t terrible at all, but from my point of view, any time you give up a run of 10, 15 yards, that’s something you wish you can have back, so there’s definitely room for improvement there.”

Running back Antonio Gibson, a college receiver who almost lost his starting job, is back as a versatile threat; he ran for 58 yards and catching seven passes for 72 more. The offense can be even deeper when rookie Brian Robinson Jr. returns after recovering from gunshot wounds, but for now Gibson is the guy and showed he can still handle that load.

Second-year linebacker Jamin Davis is still working on some of the intricacies of pro football, and while Rivera liked what the 2021 first-round pick did against the run, it was noticeable when running back Travis Etienne got wide open for what should have been a touchdown.

“I thought his overall play was pretty solid,” Rivera said. “We put him in a couple of tough positions, and they got the better of us. But that’s something we have to look at as coaches. We've got to make sure we’re helping him and being able to put him in a better position.”

Rookie defensive tackle Phidarian Mathis tore the meniscus in his left knee and is scheduled to undergo season-ending surgery, according to a person with knowledge of the injury. The person spoke to The Associated Press on condition of anonymity because the team did not reveal a diagnosis for Mathis.

“It’s tough whenever you have a young like that go down so early in the season," Allen said. "We’re going to be fine. We’ve been through this before. We have players who are going to step up and play well. And, for me, it’s just I feel bad for him having to go out so early in his career.”

Allen left late in the game against the Jaguars with a groin injury and underwent an MRI he called precautionary. “I’m feeling good, he said. ”Nothing to worry about.”

47 — Years since a Washington quarterback threw four touchdowns in Week 1 before Wentz. That was Billy Kilmer in 1975, and Sonny Jurgensen in 1968 is the only other player in franchise history to do so.

Try to slow down the Lions, who scored 35 points in their loss to the Eagles. Detroit opened as a 1 1/2-point favorite on FanDuel Sportsbook.