Panthers' defense had attitude, edge in Week 1 win over Jets 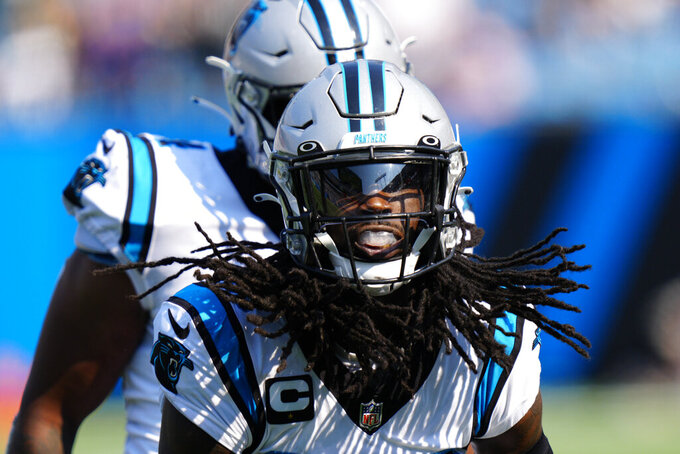 While it may be a bit early to make any grand proclamations after a 19-14 win over a New York Jets team coming off a 2-14 last season and starting a rookie quarterback, the defense certainly played with a nasty edge and swagger.

The Panthers held the Jets scoreless in the first half, limiting them to 82 yards.

Carolina finished with six sacks and 10 quarterback hits on Zach Wilson, while holding the Jets to 45 yards rushing on 17 carries. The Panthers allowed two Wilson TD passes to Corey Davis in the second half.

'We have some great guys up front," said Reddick, who had 1 1/2 sacks. “From the edges to the interior. Even our rotational pieces. Guys that are real dogs and can get after it. That’s what we put out there on the field.”

Six players were in on sacks, a balance the Panthers lacked last season.

“It’s not putting all the pressure or attention on one person — that they can slide to or double-team,” said Brian Burns, who led the Panthers last season with nine sacks. “Having that split between everybody that got sacks today, it’s a great thing.”

What was most notable was the energy and attitude the defense brought. Burns, Jeremy Chinn, Shaq Thompson and rookie Jaycee Horn are setting the tone, playing with an attacking, aggressive attitude.

“The strategy was to hit (Wilson) a lot, be in his face a lot, disguise, try to confuse him," Burns said. "That was the basic strategy. Make his first game hell. That was pretty much what we had coming in.”

If there were any doubts about how Christian McCaffrey might hold up after missing 13 games last season due to injury, those were put the rest on Sunday. McCaffrey ran for 98 yards on 21 carries and caught nine passes for 89 yards in the win. When asked if he can continue with getting 30 touches every week, McCaffrey responded, “Yeah, I'm ready to roll.” As well as McCaffrey played with the ball in his hands, his best play might have come when he picked up a block on a defensive lineman who had broken through the line, allowing Sam Darnold to complete a 57-yard touchdown pass to Robby Anderson. “It’s my job if I see (someone coming) in the A-gap or B-gap, especially on those shot plays, I have to help,” McCaffrey said.

Carolina's offensive line is going to have to improve its pass protection or it will struggle against better teams. Despite the win, the Panthers allowed eight hits on Darnold, many coming at the start of the third quarter when Carolina had a 16-0 lead and a chance to bury the Jets. Right guard John Miller didn't play after testing positive for COVID-19, but he could be back for Week 2.

Shaq Thompson is the veteran leader of the defense and the linebacker was all over the field making big plays. Thompson made 10 tackles, a sack, an interception and three pass breakups. Before the game it was announced that Thompson had changed his jersey number from 54 to 7, which is what he wore at the University of Washington where he played both linebacker and running back.

Ryan Santoso made two short field goals but missed an extra point on Sunday, drawing a loud moan from the home crowd. Santoso won the job after Joey Slye struggled during the preseason. Slye was picked up by the Houston Texans and made all three field goal attempts and all four extra points on Sunday. It's evident that coach Matt Rhule doesn't completely trust Santoso yet, as he passed up on a 51-yard field goal attempt in the first quarter by electing to punt from the Jets 33-yard line. Rhule said he made the decision because the defense was playing so well in the first half.

Panthers nickel back Myles Hartsfield injured his wrist in the second half and Rhule said it “could be significant.” Juston Burris moved to nickel back for the rest of the game. A.J. Bouye is projected to be the team's nickel back but he is serving a two-game suspension to start the season.

1 — Robby Anderson only caught one pass on Sunday against his former team, but it was a big one: A 57-yard TD reception that gave the Panthers a 9-0 lead. Anderson capped the big score by pretending to fly like a jet around the end zone.

The Panthers are back home Sunday against the Saints, a team that has dominated Carolina in recent years, winning eight of the last nine matchups. But the Saints no longer have Drew Brees at quarterback, so this could be the start of a new era — though Jameis Winston had a career day against Green Bay on Sunday.

The Panthers were 1-5 against the NFC South last season.