Patriots not quite back yet after another early playoff exit 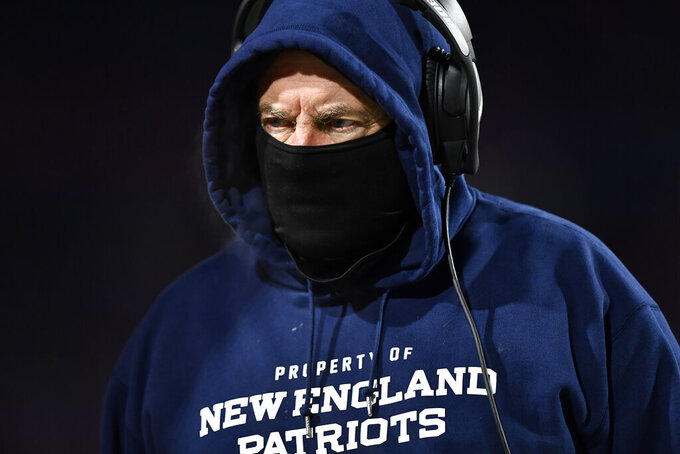 FOXBOROUGH, Mass. (AP) — Talk of a resurgence by the New England Patriots this season appears to have been a bit premature.

A 10-win season following a 7-9 finish in 2020 would be a sign of progress for almost any other NFL team. Yet, for a franchise that has grown accustomed to making deep postseason runs, the quick exit from the playoffs is a signal there’s still much work to do.

The Patriots started 2-4 before winning seven straight games and climbing to the No. 1 seed in the AFC in early December. It had echoes of what they routinely did on their way to six Super Bowl championships and nine conference titles during Tom Brady’s 20-year tenure.

It was all a mirage.

During the seven-game streak the Chargers were the only team the Patriots beat at full strength. Their losses against teams with winning records — Miami, Tampa Bay, Buffalo, New Orleans, Indianapolis and Dallas — also showed something about their vulnerabilities on both sides of the ball, despite each of those games being close.

Their narrow Week 13 win at AFC East champion Buffalo to cap their win streak was also exposed as fool’s gold following their 47-17 blowout wild-card loss to the Bills. It was New England’s most lopsided loss in the playoffs during coach Bill Belichick's tenure, and second straight wild-card round exit following their home loss to Tennessee to end the 2019 season.

“We had our ups and downs in the season, slower start, some higher points in the middle of the season, and didn’t finish the way that we wanted to,” coach Bill Belichick said. “I think we need to, and we’ll go back, and take a longer view of just everything.”

The Patriots now enter the offseason as a team still very much in transition two seasons after Brady’s departure. Yet there is hope his long-term replacement is already in their locker room.

Rookie quarterback Mac Jones at times made a case he could be the future in New England, leading all rookies in passing yards (3,801) and touchdown passes (22). But he needs development after throwing seven interceptions over his final five games, along with more explosive receivers to throw the ball to.

Jones does have a solid foundation to build on as the only quarterback selected in the first round of the 2021 draft to qualify for the playoffs.

“For me, obviously I was a rookie and I played like that sometimes and I shouldn’t have, and I can play better and that’s my goal this offseason is just to advance and bring the guys along with me,” he said. “I know we have a lot of progress to make and I’ll just feel more comfortable with anything you do a second time around: schedule, routine, everything.”

Special teams captain Matt Slater, the team’s longest-tenured player, said these past two seasons have been a dose of reality he’s never had to deal with in his 14 seasons.

“What we’ve experienced here, to have the runs that we’ve had, the expectations for this football team, no one else in the league has done that. That’s not reality,” he said. “I think perspective is important. So, you look at what happened last year and the regression we had to get back to this point. I think certainly we should be proud of that. But the other edge of that sword tells us that the expectations and the demands are high here and the standard is never going to change.”

While changes will be afoot this summer, don’t expect a coaching change to be one of them.

Asked whether he intends to keep coaching for what would be his 23rd season in New England, the 69-year-old Belichick was emphatic.

“I would say that would be accurate,” he said.

The Patriots’ defense ranked second in the NFL allowing 17.8 points per game during the regular season and got a huge boost from linebacker Matt Judon, a free agency addition who led the team with 12 1/2 sacks.

But they struggled throughout the year defending the run, giving up 124 yards per game, ranking 22nd.

Veteran defensive linemen Lawrence Guy and Davon Godchaux, another free agency pickup, had solid seasons. Rookie Christian Barmore also showed productivity. Adding depth around them, though, will be a focus this summer.

As much leadership as Slater has provided during his New England tenure, he might have played his final NFL game. The two-time All-Pro and 10-time Pro Bowl selection flirted with free agency for the first time following the 2020 season before signing a two-year deal. But he’ll turn 37 before the start of next season.

He said he’ll take time before making a decision.

"I’m closer to the end, we all know that. I’ll pray about it and make a final decision and have some conversations,” he said. “I just want to make sure I express gratitude to the people I owe it to, and take time to be reflective and thankful not only for the experience this year, but throughout the entirety of my career.”