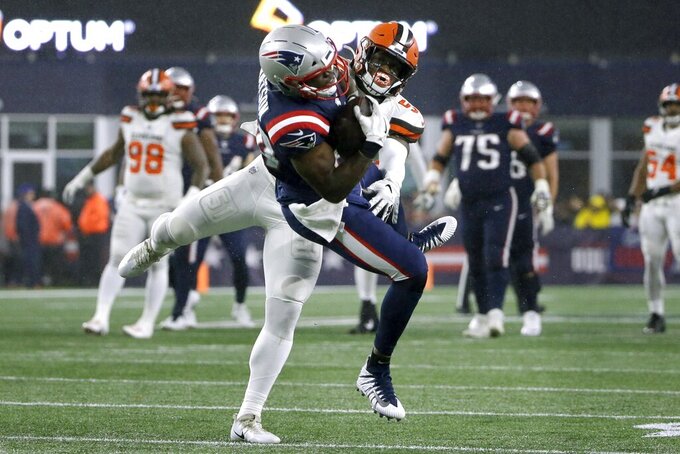 FOXBOROUGH, Mass. (AP) — As a veteran of 16 NFL seasons who spent two of those years with the Baltimore Ravens, Ben Watson is well versed in the hard-nosed history of that team.

"It was an impression that was made upon me playing against those guys when I was here," the 38-year-old tight end, who is in his second stint in New England, said Wednesday.

"Playing against them several times here as a Patriot (from 2004-2009), even in Cleveland playing against them two times a year (from 2010-2012) and then obviously being there in the building, there's definitely a lot of pride that comes from how they play defense. And again, you look at this organization, a tough, smart team, they do a lot of those same things there."

After missing the 2016 season with a torn Achilles suffered in the preseason, Watson returned in 2017 to lead the Ravens in receptions with 61 for 522 yards and four touchdowns while appearing in all 16 games.

On Sunday night at Baltimore, he will suit up against the Ravens (5-2) for the Patriots (8-0) in a matchup of AFC division leaders.

When he looks at the 2019 Ravens, Watson sees the legacy of past Baltimore defenses that featured Ray Lewis, Ed Reed and Terrell Suggs.

"You see a lot of guys who learned under those players," Watson said. "That mentality is passed down. That mentality is something unique to the city of Baltimore but also to the organization. They pride themselves in playing really tough, hard-nosed defense. Those guys aren't there, but the head coach (John Harbaugh) is obviously still there and just the mentality is there that they want to be a team that can run the football and a team that can stop the run."

Last Sunday, playing in just his second game of the season after serving a four-game suspension for violating the league's performance-enhancing drug policy and being released and re-signed by the Patriots, Watson caught one pass for 26 yards. He also took on a new role, occasionally lining up at fullback while participating in 48 of the team's 69 offensive snaps in a 27-13 win over the Cleveland Browns.

"It was one of those things where you're called to do a lot of different things on this team and you do your best at it, and that's what I did," Watson said.

Watson, who has 534 career receptions, wouldn't be averse to filling such a role in the backfield in the future, particularly in a goal-line situation.

"Now that would be great," said Watson. "We'll have to talk to Josh (offensive coordinator Josh McDaniels) about that. But if I'm in there on the goal line I will plead my case to get the ball inside the 1. I don't want to take too many hits."

The Patriots announced the signing of 34-year-old kicker Nick Folk to take the place of Mike Nugent, who was released on Tuesday.

Folk has appeared in 154 regular season games and converted 245 of 305 field-goal attempts and 342 of 346 extra-point attempts for 1,077 points over 11 seasons with Dallas, the New York Jets and Tampa Bay. He hasn't kicked in the NFL since 2017, when he was with the Buccaneers for four games.

Veteran Stephen Gostkowski was placed on IR by the Patriots on Oct. 2. Nugent was 5 of 8 on field goals and 15 of 16 on PATs in four games with the team.