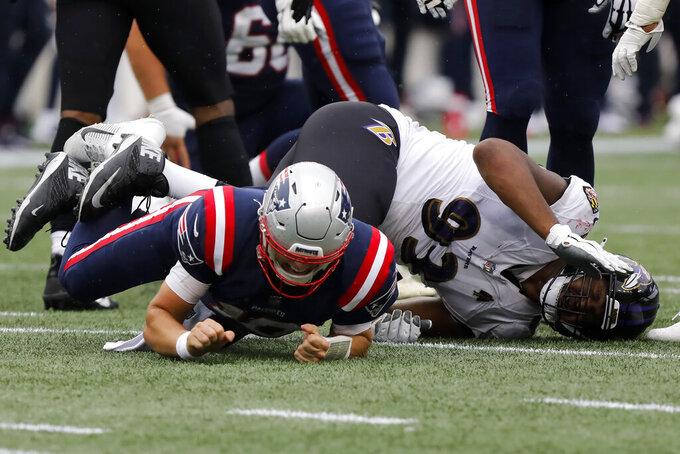 FOXBOROUGH, Mass. (AP) — Everything about the New England Patriots’ season was brought to a pause the moment Mac Jones had his left leg crushed under the weight of Baltimore’s Calais Campbell on Sunday.

It caused the quarterback to hop off the field, grimacing in pain.

For the second straight week, Jones spent Monday trying to assure everyone that he would be OK — even though he wasn't willing to shed much light on his playing status going forward.

“I'm just kind of taking it day to day, making sure everything is good,” Jones said. “Honestly, any injury questions are Coach Belichick's thing. So, I'm not here to answer them. ... It's just kind of a day-to-day thing and trying to get better.”

A back injury sent Jones to the X-ray room immediately following New England's win over Pittsburgh last week, though he didn’t wind up missing any practice time for that issue. This latest injury to his left leg and ankle at a glance seems more likely to put the second-year quarterback's streak of not missing an NFL start in jeopardy.

While there have been reports Jones sustained a high ankle sprain and may be seeking a second opinion, he declined to address their authenticity following further testing Monday.

“Just trying to take it day by day, make sure I get my health back,” he said. "That’s just getting my treatment and going through the process of what I can do to be better.”

If he must miss any playing time, an offense that turned the ball over four times in Sunday’s loss to the Ravens could turn to backup Brian Hoyer, who hasn’t won an NFL start since 2016.

Hoyer’s most recent start came in Week 4 of the 2020 season. He stepped in that week for Cam Newton, who sat out the Patriots’ 25-10 loss at Kansas City with COVID-19.

Rookie Bailey Zappe is the third quarterback on New England’s roster. He was a healthy scratch each of the first three weeks.

Hoyer has made starts for seven NFL teams during his 14-year career, but has lost his past 11 and amassed a record of just 16-23. The 2020 loss to Kansas City was his lone start with the Patriots. He was benched during the game in favor of Jarrett Stidham.

Except for the final three drives of the game, which all ended in turnovers, the Patriots moved the ball the best they have all season on offense. Their 447 total yards marked a season high, and they scored touchdowns on three of five opportunities in the red zone.

That said, New England did have four turnovers Sunday, including three interceptions by Jones. It brought their season total to eight, which is the second-most in the league behind only New Orleans’ nine.

That is a troubling trend for an offense that is now staring at the prospect of having to adjust with its leader on the mend.

WR DeVante Parker. After being mostly quiet over the first two games, Parker had a team-high five receptions for 156 yards. It marked his 12th career 100-yard game. The 156 yards were second only to his 159-yard day against Philadelphia in 2019 when he was still with the Miami Dolphins.

“Nothing was different,” Parker said. “I felt good, like I’ve always been. When they call my plays, I just have to go out and make the plays.”

WR Nelson Agholor. With the Patriots trailing 31-26, Jones connected with Agholor over the middle for a 30-yard gain before he was stripped from behind. The ball was recovered by Baltimore along the sideline, setting up the Ravens’ final touchdown drive.

It was Agholor’s second lost fumble of the season. He also had one in the Patriots’ season-opening loss at Miami.

Still, he said his confidence isn’t shaken after Sunday’s turnover.

“That guy came out of nowhere and made a great play,” Agholor said. "I hate to be on the other side of a play like that, but I have to pay respect to a guy who can make a good play like that.”

In addition to Jones, defensive end Lawrence Guy suffered a shoulder injury in the third quarter. Guy has been durable during his Patriots tenure, missing only two games over the past five seasons. But one of the games he did sit out was for a shoulder issue late during the 2020 season.

22.9 — New England’s percentage on third down against the Ravens.

All eyes will be on Jones’ progress as the Patriots begin preparations for Sunday’s visit to Green Bay, looking to avoid their second straight 1-3 start.