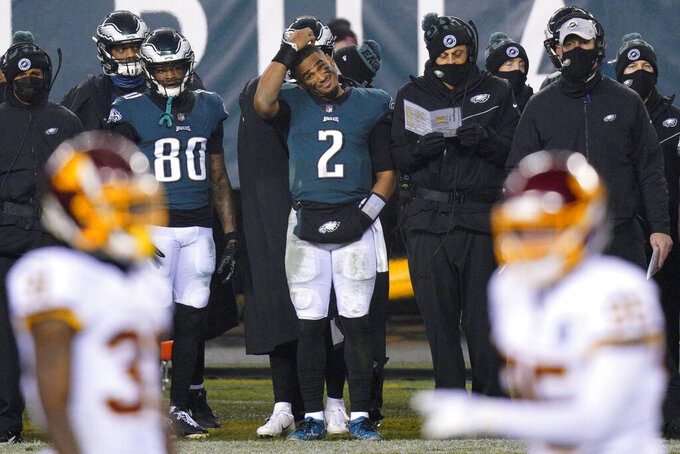 Philadelphia Eagles' Jalen Hurts scratches his head on the sideline during the second half of an NFL football game against the Washington Football Team, Sunday, Jan. 3, 2021, in Philadelphia. (AP Photo/Chris Szagola)

DENVER (AP) — Three years ago Doug Pederson was hailed as a genius after his “Philly Special” call resulted in backup quarterback Nick Foles catching the game-defining touchdown pass in the Eagles' first Super Bowl triumph, a 41-33 masterpiece against New England.

Now, the Eagles coach is getting slammed for the quarterback quagmire he created Sunday night that helped Washington escape with the final NFC playoff berth over the fuming New York Giants.

In a game that held playoff implications for other teams, Pederson chose to give a third-string QB some playing time, benching Jalen Hurts for Nate Sudfeld in the fourth quarter of a 20-14 loss to Washington.

The victory gave Washington the NFC East title despite a 7-9 record and prevented the Giants from winning the division at 6-10.

The decision didn’t go over well with the Giants and other NFL players who posted their reactions on Twitter.

“To disrespect the effort that everyone put forward to make this season a success for the National Football League, to disrespect the game by going out there and not competing for 60 minutes and doing everything you can to help those players win, we will never do that as long as I’m the head coach of the New York Giants,” Giants rookie head coach Joe Judge said Monday.

Sudfeld hadn’t thrown a pass since 2018 and threw an interception on his second pass. He also lost a fumble.

The loss capped a 4-11-1 campaign for Philadelphia and left the Eagles with the sixth pick in the NFL draft this spring. A victory would have dropped them to ninth, a spot held by the Broncos.

Hurts, who took over for Carson Wentz last month, finished 7 of 20 for 72 yards with one interception, but had a pair of 6-yard TD runs to help the Eagles overcome a 10-0 deficit. His passer rating of 25.4 was the lowest by an Eagles starting quarterback since Foles posted a 9.3 rating in the final regular-season game in 2017, a month before he was named Super Bowl MVP.

There hasn’t been this kind of bad blood between the Raiders and Broncos since Al Davis decided not to pay Mike Shanahan all those years ago.

As he headed out of bounds near midfield, cornerback Keisein Nixon caused Fant to stumble.

Raiders head coach Jon Gruden stepped out of Fant’s way, but O’Neil squared up, stiffened his right shoulder and leaned into Fant as the tight end stumbled past, connecting on Fant’s right arm and shoulder and spinning the 6-foot-4, 249-pound second-year pro who took immediate exception.

As that’s happening, side judge John Jenkins quickly grabbed Fant around the waist and escorted him back onto the field while O’Neil and Gruden said something to Fant.

Jenkins didn’t throw a flag on either party.

“That’s never happened to me before,” Fant said Monday. “I thought that was very unprofessional. I’m not sure what coach does that. I’ve heard a plethora of things like, ‘He was trying to catch you.’ ... He went out of his way to shoulder me and it totally turned me.”

Fant said his only regret was missing O’Neil with the football he flung at him.

“I feel like I (re)acted accordingly,” Fant said. “I don’t believe that I should have had some sort of maturity and said, ‘I’m going to be the bigger man.’ As I’m coming off the field, I should never be shoulder checked by a coach, if that, even a player.”

Asked about the incident Monday, Gruden said: “I just stay away from Noah Fant. He’s a big guy. I try not to make the other team mad. But we don’t like to have any confrontations with players, our players, their players, any players. But sometimes in the heat of the battle, things get said or there’s some misunderstanding on the sidelines.

“Guys get bumped into and they take it personally. There’s a lot of emotion out there. I think that’s what you saw yesterday. But I’m confident Jim O’Neil and Noah Fant are pros.”

Fant didn’t think there was any misunderstanding, just poor sportsmanship.

Asked if he wanted the NFL to discipline O’Neil, Fant said, “I know if I would have really shoved him or done something really harmful to him, then I would have gotten fined, but that’s up to the league to decide."

As any bettor knows, sometimes the smallest of plays can make a big-dollar difference in an NFL game. Week 17 featured plenty of money grabs, not by bettors but by some of the players themselves.

Emmanuel Sanders caught nine passes for 63 yards and a touchdown in New Orleans’ 33-7 win against Carolina, and his eighth reception, a 9-yarder over the middle, was his 60th of the season, triggering a $500,000 bonus in his contract.

Drew Brees acknowledged afterward that he was trying to get Sanders to the magic mark, “so down the stretch, you’re just trying to feed him.”

Seahawks QB Russell Wilson said he changed a play call with 22 seconds left in Seattle’s 26-23 win over the 49ers to get David Moore a reception before his team lined up in victory formation.

And in Tampa, Bucs receiver Antonio Brown went into the game against Atlanta needing nine catches to reach 45 and trigger a $250,000 bonus. Tom Brady threw to him 14 times. Brown caught 11 of them for 138 yards and two TDs in a 44-27 victory.