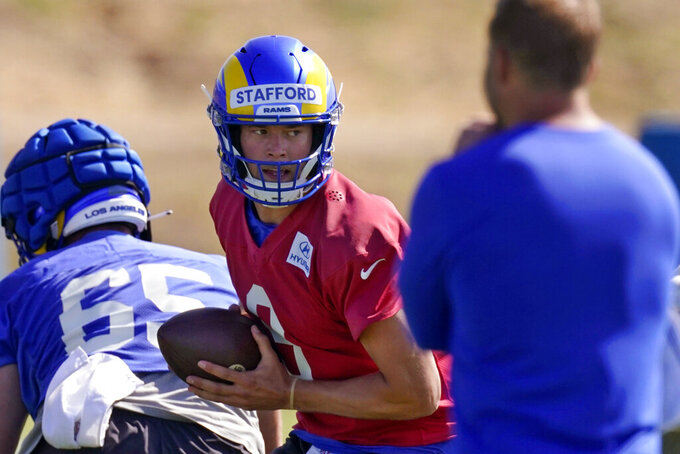 The quarterback still thinks he got plenty of knowledge out of the Super Bowl champions' workouts, and he says he'll “definitely” be ready to throw in training camp. He doesn't believe the inactivity will hamper him by the time the Rams are ready to begin their chase of a second ring.

“I love practicing,” Stafford said Wednesday. “This isn't that fun for me, to come out here and not throw the ball. I love to get reps. I love to practice and compete, so it was hard for me to not be able to do that, but I want to continue to practice and improve.”

Stafford had an injection in his right elbow early in the offseason after leading the Rams to a title in his first season with the team. His progress back from the procedure has been purposefully deliberate, but he expects to be active with his teammates even before Los Angeles begins training camp in late July.

Stafford said he'll probably meet up with his receivers for informal workouts during the summer break.

“As I'm progressing through my program and trying to get ready to go, I'll be around the guys,” Stafford said. “That's the great thing about being in Southern California: Everybody wants to be here anyways. It'll be great to get out there and get some work with some of those guys.”

Stafford fulfilled his potential last season while throwing for 4,886 yards in the regular season and then leading the Rams to the first four playoff victories of his 13-year career. The veteran was everything that Sean McVay believed he would be — particularly in the postseason, where he led the Rams on late game-winning drives in each of their final three playoff games.

Stafford should be even more comfortable in McVay's offense in his second season, but while NFL receiving leader Cooper Kupp is back, the Rams made some changes by trading Robert Woods and signing Allen Robinson. Los Angeles also doesn't know whether Odell Beckham Jr. will return to the team while he recovers from his knee injury in the Super Bowl.

Stafford and his coaches are confident he has plenty of time to build a connection with Robinson before the season opener.

“I've done some of the jog-through stuff, which is the majority of the team stuff we're doing now,” Stafford said. “That's the best part about this time of year. I look up, there's new faces in the huddle, and we're getting work with these guys. I think it's important for me to get work with them.”

Coen was on the Rams' staff until leaving shortly before Stafford joined the team last year, and Coen is grateful to return with a veteran quarterback of Stafford's talents at the controls of the offense — even when he's not actually throwing passes yet.

“I'm excited to watch Matthew throw the football, but it's been really good to get to know him a little bit on the side when he isn't taking those reps,” Coen said. “I've been able to kind of see things through his lens on the back end, and be able to see how he sees things, talk through some concepts.”

Coen echoes the praise given by McVay last year to Stafford, whose veteran poise and complete game have been a natural match with McVay's innovative offense. Los Angeles finished tied for seventh in the league in scoring while ranking fifth in yards passing.

“When you play football for as long as he has, at as high a level as he has, the game is just extremely slow for him,” Coen said. “How slow it is for him, and how he sees the game in real time, pre-snap, how fast he can point out the decision he's making, I mean, it's ridiculous. Just the leadership, the communication, the way he is with the players, with the coaches, his meeting room intelligence and his demeanor, it's just been unbelievable to be around a guy like him.”