Ravens' Humphrey says he has virus; Packers also have 1 case 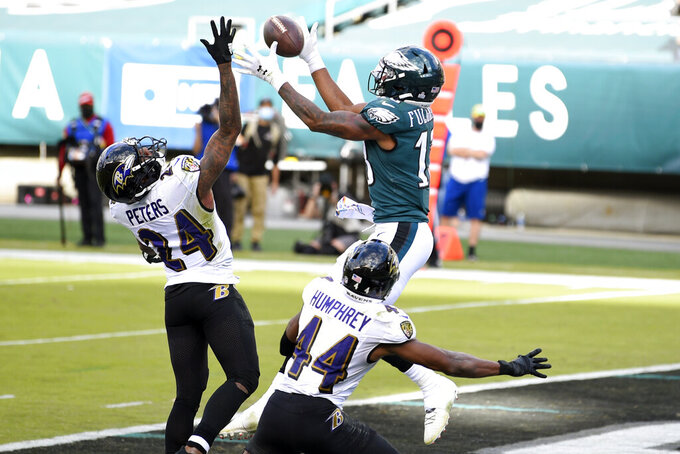 Baltimore Ravens All-Pro cornerback Marlon Humphrey says he has the coronavirus, and several other NFL teams reported positive tests Monday, providing new concerns for a league trying to complete the season amid a pandemic.

The Green Bay Packers reported that a player tested positive for COVID-19, and Arizona coach Kliff Kingsbury confirmed that two Cardinals tested positive over the weekend.

In addition, the Browns conducted meetings remotely Monday after a player reported that he is experiencing “COVID-19-related” symptoms.

It was a difficult day for the league as it nears the halfway point of a season that's already had its schedule altered by outbreaks of COVID-19.

In a post on Twitter, Humphrey wrote: “I got the Rona hopefully I’ll be back healthy soon."

Humphrey missed practice last Wednesday with what the team described as an “illness," but returned Thursday and played in Sunday's 28-24 loss to Pittsburgh.

Ravens coach John Harbaugh ruled Humphrey out for Sunday's game in Indianapolis, and said the team has stepped up efforts to monitor the players and keep them healthy.

“We're in the intensive protocol the NFL puts in place," Harbaugh said. “We prepared for this, we've had a plan in place, we plan to have a great week of preparation and we plan to be ready to play the game on Sunday."

He said the team will hold virtual meetings but continue to practice on the field, beginning Wednesday.

The NFL administers daily testing, including game day and during bye weeks. Results of the tests generally come in overnight. Tests taken the day before the game determine if the player can play on game day.

On game day, they have their temperatures taken by contactless thermometers, are screened for loss of smell or taste and have other symptoms checked prior to entering the stadium, NFL spokesman Brian McCarthy said. Players and personnel also have to report any symptoms.

That explains why players can play on Sunday, then have a Sunday morning test come back positive on Monday.

The Ravens confirmed Monday that a player tested positive for COVID-19, but did not release the name of the individual. Harbaugh confirmed Humphrey was that player.

Humphrey is a key figure on a Baltimore defense that has forced a turnover in 20 straight games. He had four tackles against Pittsburgh.

The Steelers, after being made aware of a Baltimore player testing positive, released a statement that tests on their players all came back negative. The team said it would follow all NFL protocols and take precautionary measures at its training complex.

The Packers on Monday also sent out a release that said a player tested positive. According to multiple reports, that player is running back AJ Dillon, who was placed on the reserve/COVID-19 list.

Packers officials said all player meetings Monday would be conducted virtually. The player who tested positive has self-quarantined.

This marks the first time a Packers player has tested positive during the season. Green Bay (5-2) has a short week before playing at San Francisco (4-4) on Thursday night.

After facing Green Bay on Sunday, the Minnesota Vikings moved forward after last week having two players on the COVID-19 list.

“Well, it doesn’t affect us because we’re already in intensive protocol," coach Mike Zimmer said. “We’ll be there ’til Thursday unless they change the rules on us again.”

In Arizona, Cardinals linebacker Devon Kennard says he has tested positive for COVID-19, but feels “completely normal so far.” The 29-year-old Kennard signed with the Cardinals in the offseason after playing his first six seasons with the New York Giants and Detroit Lions. He’s played in five games this season, starting four, and has two sacks.

The Cardinals did not release the name of the other player who tested positive over the weekend.

The Browns, meanwhile, announced they would conduct their football meetings remotely on Monday.

The team said: “This morning, an active player who has not been in the facility today reported that he is experiencing COVID-19 related symptoms. While there have been no positive test results among players, coaches or staff members, the team decided to host meetings remotely to exercise the appropriate level of caution.”

The Houston Texans have had no other positive COVID-19 tests since one positive test forced the closure of their facility during last week’s bye.

Interim coach Romeo Crennel said the facility underwent a deep cleaning last week and that operations were back to normal on Monday as the Texans returned to work to prepare for Sunday’s game against the Jacksonville Jaguars.