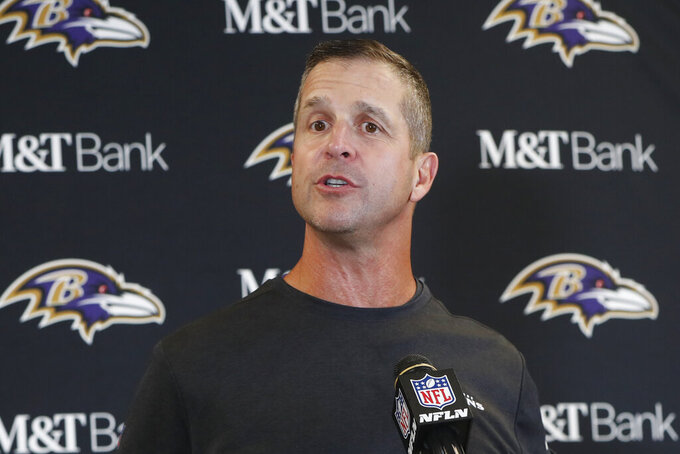 BALTIMORE (AP) — Lamar Jackson doesn't recall many of the details of his first NFL start for the Baltimore Ravens, except perhaps for the most important facet of that impressive performance against the Cincinnati Bengals last November.

"I remember us winning the game. That was pretty cool," he said. "That's all I need to remember."

Taking over for injured quarterback Joe Flacco, Jackson carried 26 times for 119 yards and went 13 for 19 for 150 yards passing in a 24-21 victory. While he has no need to duplicate those lofty numbers in the rematch Sunday, the 2016 Heisman Trophy cited one task worth repeating.

Jackson and the Ravens (3-2) are well equipped to do it again. With a slippery quarterback and a run-first offense, Baltimore faces a winless Cincinnati team that ranks 31st against the rush and last week allowed Arizona rookie quarterback Kyler Murray to ramble for 93 yards.

That bodes well for Jackson, who's thrown for 11 touchdowns and has run for 308 yards and a score.

"You've got to respect him throwing the ball and know what he can do running the ball," Bengals defensive end Carlos Dunlap said. "You've got to honor both of them, and last week we didn't do a good enough job against Kyler, so they're going to try to exploit that, too."

It's been a rough start for the Bengals (0-5) under first-year coach Zac Taylor, whose mantra this week is: "What can we do to ramp it up a notch and get this first win?"

Getting healthy would help. Wide receiver A.J. Green has been sidelined since training camp with an ankle injury, and another deep threat, John Ross III, is on injured reserve with a shoulder injury. In addition, first-round pick Jonah Williams, an offensive tackle, underwent shoulder surgery in June and backup Cordy Glenn has yet to play because of a concussion.

Some things to know about Sunday's matchup:

Not only is the series tied at 23 wins apiece, but the last six games in Baltimore have been decided by seven points or fewer. Ravens coach John Harbaugh is 10-12 against Cincinnati, so he's taking nothing for granted in this duel between teams on the opposite ends of the division.

"They've had our number a number of times, and it'll be a physical AFC North battle," he insisted. "Andy Dalton is a proven quarterback in this league. He can play. He can make plays at any time. They have a great running back (Joe Mixon), physical offensive line in the run game and proven players on defense, too. So, we just expect their best, and we have to play our best to win."

The Bengals expect to have yet another new look on the offensive line.

Glenn is doubtful despite seeing limited duty at practice this week, and left tackle Andre Smith was wearing a protective boot after hurting his left ankle against Arizona. Guards John Jerry and guard Alex Redmond worked out at tackle during the week, just in case. Redmond is returning from a four-game suspension for violating the league's policy on performance-enhancing substances.

Also, backup center Billy Price is expected to start at left guard in place of rookie Michael Jordan, who has struggled.

Jackson was sacked five times by Pittsburgh last week after getting sacked four times one week earlier against Cleveland.

"I just have to do a better job of getting out," he said. "I'm not trying to set sack records for our offensive line."

The good news for Jackson is that Cincinnati has had little success getting at the quarterback, accumulating only six sacks in five games.

Murray came in as the most-sacked quarterback in the league but was dropped only once Sunday, and his 24-yard run through the heart of the defense set up the winning field goal.

The Bengals are 0-5 for the seventh time since 1990, the most in the league over that span. The last time they went 0-5 was 2008, when they dropped their first eight games under Marvin Lewis.

Cincinnati's worst start is 0-10 under Dave Shula in 1993. Taylor is the second head coach in Bengals history to lose his first five games; Sam Wyche also started 0-5 in 1984.

The Bengals led in the fourth quarter of losses to Seattle, Buffalo and Arizona, with the Bills and Cardinals scoring in the closing minutes to pull it out.