Rodgers arrives in Green Bay for start of training camp 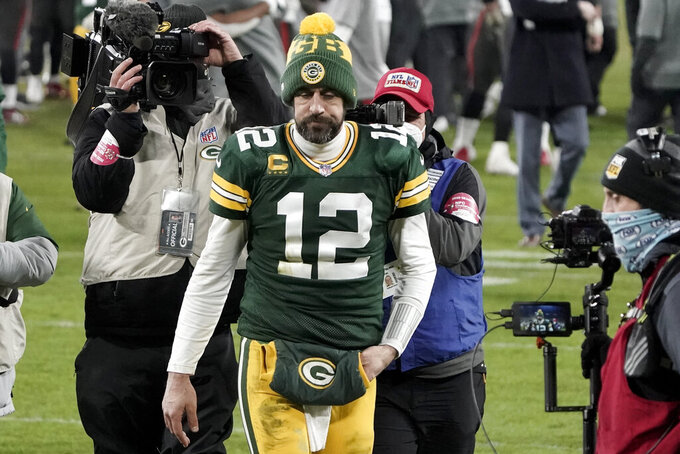 FILE - In this Jan. 24, 2021, file photo, Green Bay Packers quarterback Aaron Rodgers (12) walks off the field after the NFC championship NFL football game against the Tampa Bay Buccaneers in Green Bay, Wis. Green Bay Packers president/CEO Mark Murphy remains hopeful Rodgers the three-time MVP will play for them this season, but says he does not know whether Rodgers will arrive for the start of training camp. (AP Photo/Morry Gash, File)

GREEN BAY, Wis. (AP) — Aaron Rodgers has made it to Green Bay on the eve of the Packers’ first training-camp workout.

Rodgers was seen arriving at Lambeau Field on Tuesday morning, the day after NFL Network and ESPN reported the reigning MVP was closing in on a deal that would keep him with the Packers this season. The Packers later tweeted a photo of Rodgers at Lambeau Field — wearing oversize sunglasses and a novelty T-shirt referencing “The Office.”

The Packers open training camp Wednesday. Under terms of the collective bargaining agreement, Rodgers would have been subject to a $50,000 fine for every day he held out during camp.

Rodgers didn’t participate in organized team activities this spring — a change from his usual offseason routine — and skipped the Packers’ mandatory minicamp.

His future with the Packers had seemed tenuous after ESPN reported in the hours leading up to the draft that he didn’t want to return to Green Bay. Rodgers has spent his entire career with the Packers, who selected him with the 24th overall pick in the 2005 draft.

When the NFL’s only publicly owned team held its shareholders meeting Monday, Packers president/CEO Mark Murphy said he was hopeful the two sides could resolve their differences and added that they’d been “in constant communication.”

“We want him back,” Murphy told the 3,900 shareholders who gathered at Lambeau Field. “We’re committed to him for 2021 and beyond. He’s our leader. We’re looking forward to winning another Super Bowl with him.”

NFL Network reported Monday that Rodgers had told people close to him he planned to play for the Packers this season. ESPN reported that Rodgers and the Packers were on the verge of a deal in which the team would void the final year of the three-time MVP’s contract, perhaps clearing the way for him to leave Green Bay after the upcoming season.

On the same day that Rodgers reported to Lambeau Field, the Packers released quarterbacks Blake Bortles and Jake Dolegala. The Packers had signed Bortles in May, a couple of weeks after the reports of Rodgers' discontent surfaced. Dolegala signed with the Packers in June.

Bortles' release leaves Rodgers, 2020 first-round draft pick Jordan Love and Kurt Benkert as the lone quarterbacks on Green Bay's roster. Benkert signed with the Packers less than a week after they added Bortles.

Neither Love nor Benkert has ever played a down in an NFL game.

The return of Rodgers would make the Packers legitimate Super Bowl contenders once again after they lost in the NFC championship game each of the last two seasons.

Rodgers, 37, threw for a league-high 48 touchdown passes with only five interceptions last season while helping the Packers lead the league in scoring. He also led the NFL in passer rating and completion percentage.