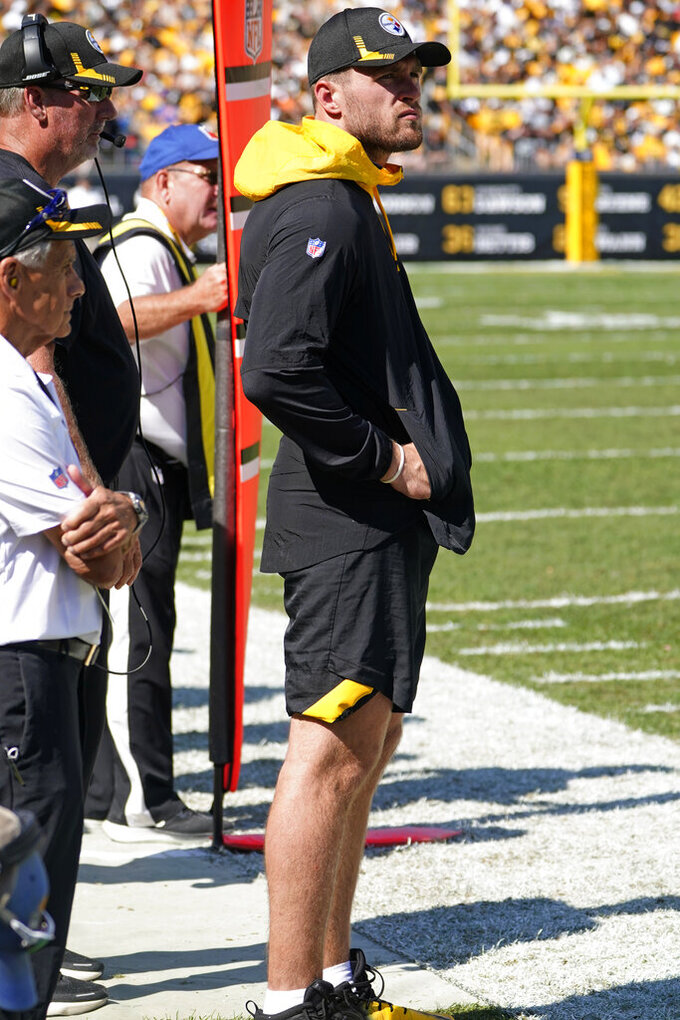 Pittsburgh Steelers outside linebacker T.J. Watt stands on the sideline after being injured during the second half of an NFL football game against the Las Vegas Raiders in Pittsburgh, Sunday, Sept. 19, 2021. (AP Photo/Keith Srakocic)

PITTSBURGH (AP) — So much for the Pittsburgh Steelers’ very brief run with good health.

Quarterback Ben Roethlisberger, outside linebackers T.J. Watt and Alex Highsmith, wide receiver Diontae Johnson and cornerback Joe Haden and inside linebacker Devin Bush are among a growing list of players dealing with issues as the Steelers (1-1) prepare to host Cincinnati (1-1) on Sunday. Defensive lineman Tyson Alualu is now on injured reserve after undergoing surgery Monday on his fractured right ankle.

Coach Mike Tomlin said Tuesday that Roethlisberger is dealing with an injury to his left pectoral, leaving his participation in practice this week in question. Tomlin wasn't sure when Roethlisberger got hurt, though he did not miss a snap during a 26-17 loss to Las Vegas last week.

Watt, Highsmith, Bush and Haden are all dealing with groin injuries. Haden and Bush were both inactive on Sunday after testing the injuries during pregame. Watt sustained his injury in the second quarter and watched from the sideline in sweatpants as Las Vegas quarterback Derek Carr lit the Steelers up for 263 yards and two touchdowns after halftime. Highsmith was on the field during the Raiders' final drive.

Tomlin did not rule any of them out for Cincinnati's visit to Heinz Field. He sounded less optimistic about Johnson, who injured his knee at the end of a short gain on the game's final snap.

“He’s looking better, but that's not to be confused with great,” Tomlin said of Johnson, who leads the team with 14 receptions through two weeks.

Tomlin stressed all of the answers to his team's injury problems are “in house,” indicating he doesn't expect them to be long term while expressing confidence in his reserves and practice squad players.

“I’m not necessarily worried about the injury in terms of our expectations or in terms of our performance,” Tomlin said. “We have a week to prepare with known issues. In-game injuries caused more problems than known issues like you’re faced with here at the top of the week.”

Veteran linebacker Melvin Ingram played well in the second half with Watt on the sideline, racking up his first sack in two years. Jamir Jones could be thrown more heavily into the rotation if Watt and/or Highsmith are unavailable.

“(Jones) is doing the things that young guys do, which is part of the natural maturation process,” Tomlin said.

The Steelers do have depth at wide receiver if Johnson can't go in fourth-year man James Washington, who has seen limited playing time behind Johnson, JuJu Smith-Schuster and Chase Claypool.

While there figure to be plenty of moving pieces in the lineup on Sunday, the offensive line does not appear to be one of them. Tomlin said he will not make any changes along the line even with the Steelers ranked last in the NFL in yards rushing through two weeks, the same position they held in 2020.

Harris has just 26 carries for 83 yards through two games and Roethlisberger has already been sacked four times, more than a quarter of the total he absorbed in 2020. Tomlin allowed Roethlisberger is getting hit too much, but preached patience as the line attempts to create some form of chemistry.

The Steelers have won 14 of 16 against Cincinnati, though their last game versus the Bengals was a 27-17 road loss last December even with Cincinnati missing rookie quarterback Joe Burrow. Burrow will be available this time around, and Pittsburgh could be short-handed in several areas.

Not that it matters to Tomlin.

“Every man is working with great urgency,” he said. “And when I ring the bell, they better answer.”