Rookies catch on quickly for Bengals, Dolphins and Falcons 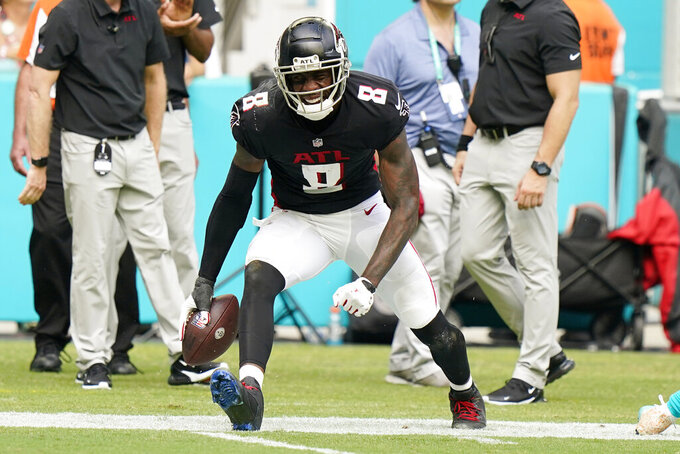 Atlanta Falcons tight end Kyle Pitts (8) celebrates after making a catch during the second half of an NFL football game against the Miami Dolphins, Sunday, Oct. 24, 2021, in Miami Gardens, Fla. (AP Photo/Wilfredo Lee)

In what is beginning to look like a historic season for NFL rookies, take a gander at Ja’Marr Chase, Jaylen Waddle and Kyle Pitts — all high first-rounders in last April’s draft.

Cincinnati wide receiver Chase, the No. 5 overall selection out of LSU, ranks second in the league with 754 receiving yards, the most by a player in his first seven career games. If Chase leads the league in receiving yards after this week’s game at the Jets, he will become the first rookie to do so at this point of a season.

“He’s a stud, man, which everyone knew coming out,” Jets coach Robert Saleh said. "What he’s doing for this Cincinnati team is very similar to kind of what Deebo Samuel did for San Francisco his rookie year when he just kind of unlocked a lot of different things offensively for the rest of the guys and everyone’s gotten better.

“They’re already good, but they’ve gotten better because of his presence.”

Miami wide receiver Waddle, taken one spot after Chase, is tops among rookies with 44 receptions. With six catches at Buffalo he can become the third player with at least 50 through his first eight career games, joining Giants running back Saquon Barkley (58 in 2012) and Broncos wideout Eddie Royal (52 in 2008).

Atlanta tight end Pitts, the No. 4 overall selection, is third at his position with 471 receiving yards. He had 119 yards in Week 5 vs. the Jets and 163 yards against Miami in Week 7 (after Atlanta’s bye).

No rookie tight end has ever had at least 100 receiving yards in three consecutive games.

Isaac Edwards, a 13-year-old Dallas resident, wants to become a sports photographer. Ware, along with Stand Together, provided the teenager with a weeklong photography training course, a new camera and a surprise opportunity to photograph the former Cowboys and Broncos star in person at Dallas’ team facility.

“It was great because during COVID you don’t get that 1-on-1 feel,” Ware said on the AP Pro Football Podcast. “You've got a kid that is following his dreams, trying to be a photographer. I have a production company in Texas, so to be able to sort of be that role model, not just from football, but shed some light on you do what you do and don’t let anybody tell you what you can and can’t do and sort of push them a little bit.”

Ware is among 10 first-year eligible players on the list of 122 nominees for the Pro Football Hall of Fame. The list will be reduced to 25 next month.

Ware made nine Pro Bowls, had two sacks in a Super Bowl win with Denver and is the all-time sacks leader for the Cowboys.

“As a kid, you don’t think about a gold jacket, you think about getting a scholarship and going to college and then you get an opportunity to play in the NFL,” Ware said. “Once you get to that point, you want to be the best. And I put that resume in and it’s like a dream come true.”

When Dallas plays at Minnesota on Sunday night, two of the NFL’s best running backs — Ezekiel Elliott and Dalvin Cook — will be closely watching the other from the sideline.

There’s a certain connection between elite players at this demanding position that was left behind in the passing renaissance that began in the previous decade.

At a time when some teams were balking at big payouts for their star running backs, Elliott was the first bank-breaker with a $90 million contract with the Cowboys in September 2019. Since then, seven other running backs have joined him in the eight-figure club with annual average values of $10 million or more. That includes Cook, who got a $63 million deal with the Vikings in September 2020.

“I think we did a pretty good job of waking the world’s eyes back up to how much the running back position is valued, how much we mean to teams and organizations,” Cook said. “We do a lot of dirty work and stuff like that. Zeke, starting with him, they reset the market. Whatever they had to do, they did it. I appreciate those guys for doing that before my time.”

Asante Samuel gave opposing offense’s headaches during his five seasons in New England from 2003 to 2007, logging 22 interceptions and an All-Pro selection while contributing to the Patriots’ back-to-back Super Bowl-winning teams.

Now the retired cornerback’s son will be trying to cause just as many problems against his father’s former team.

Asante Samuel Jr., a second-round pick by the Chargers in April, has two INTs and has started all six games for Los Angeles in his first NFL season.

“It makes me feel old,” Belichick said of facing the children of his former players. “But it’s been going on for a while with Orlando Brown, and there’s been a whole bunch of them.”

Hall of Fame safety Ed Reed is enjoying his role as chief of staff for the Miami Hurricanes.

Reed played for the ‘Canes before becoming a five-time All-Pro safety and the 2004 AP Defensive Player of the Year with the Baltimore Ravens.

“I’m here first and foremost for those young men trying to help them to understand professionalism, the tradition that we had when I was here, the tradition that was here before I even got here,” Reed said on the AP Pro Football Podcast. “And, teaching them things that their coaches might not have time to teach them. When they’re not in the meeting rooms with their coaches and coming back to do extra things, trying to get them to understand that they have to do things outside of what the coaches do for them, and just being responsible adults.

Reed has partnered with Crown Royal, the NFL’s first whisky sponsor, in a new television commercial that is dedicated to the people and places that help make game day big, from the family-owned bars to the bodega with the best subs and showcases the brand’s commitment to bringing generosity to the forefront. It’s part of the brand’s yearlong commitment to donate $1 million dollars through the Crown Royal Generosity Fund.

Titans safety Kevin Byard usually is very active on social media. Then he found himself locked out of both his Instagram and Twitter accounts earlier this month.

“It’s never happened before,” Byard said. “I got hacked. and I was out of Instagram as well, but I was able to get back in that one fast. But Twitter’s a different platform and then kind of had some verification stuff they had going on. But yeah, I was hacked, man. I don’t know how that happened, who hacked it, why they did it.”

One good thing: The hacker didn’t send a bunch of “crazy messages” to his followers.

“So I was safe on that, though,” Byard said.

And, yes, Byard is glad to be back on social media, where he has more than 49,500 followers on Twitter and more than 93,700 on Instagram.

“Absolutely, man,” Byard said. I love interacting with the fans and see what’s going on Twitter.”